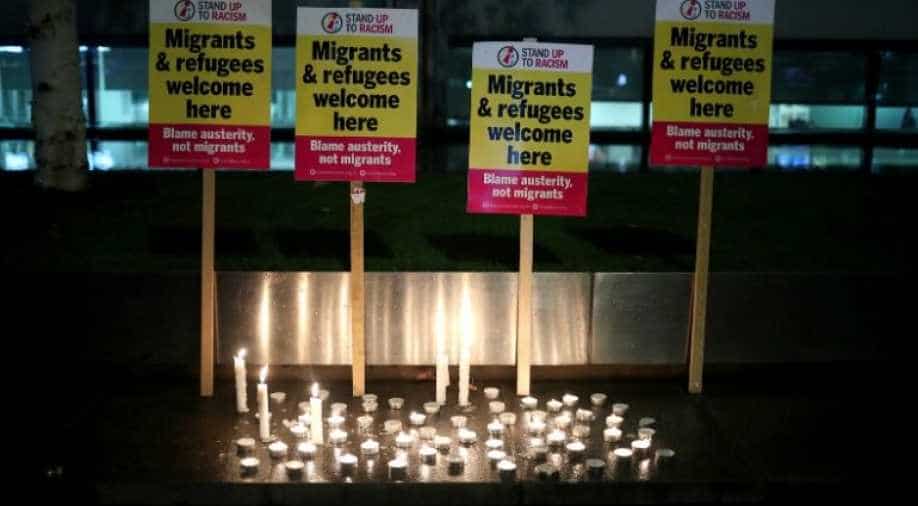 Placards and candles placed by anti-racism campaigners are seen during a vigil, following the discovery of 39 bodies in a truck container on Wednesday, outside the Home Office in London, Britain October 24, 2019. Photograph:( Reuters )

The container found at an industrial park in grays in the early hours of Wednesday. Is thought to have been brought into Zeebrugge the afternoon before - and then arriving in Purfleet at around midnight.

UK authorities have been able to ascertain that the trailer that contained 39 people who were later found dead in Essex had arrived in Purfleet on the river Thames from the Belgian port of Zeebrugge.

Officials have long since pointed blame to organised crime syndicates within Belgium with Zeebrugge highlighted as a key embarking point for "clandestine arrivals" in a 2016 UK border force threat assessment.

The container found at an industrial park in grays in the early hours of Wednesday. Is thought to have been brought into Zeebrugge the afternoon before - and then arriving in Purfleet at around midnight.

Purfleet was also identified back in 2016 as one of the less busy UK Ports. Favoured by criminal smuggling gangs, forced to pursue alternatives due to improved controls and security in France.

The head of the Zeebrugge port has said that they couldn't detect the 39 people when they went through the Belgian port.

Essex police have said that it was the largest murder investigation in the force's history.

formal identification of the 39 people believed to be Chinese nationals. Could be a lengthy process with due post-mortems of each of the deceased only after which can their identities be then revealed.

china's ambassador to the UK  Liu Xiaoming tweeted that the embassy had read the reports of the deaths "with heavy hearts" and was in close contact with British police.

Meanwhile, police officers signed a book of condolences for the Chinese victims at the Thurrock council in Essex.

For years, illegal immigrants have attempted to reach Britain stowed away in trucks. Often from the European mainland in 2000, the biggest such tragedy yet, 58 Chinese were found dead in a tomato truck in at the port of Dover.

Belgium's federal prosecutors, who handle cases of terrorism and organised crime, said on Thursday they had opened an investigation into the transport.