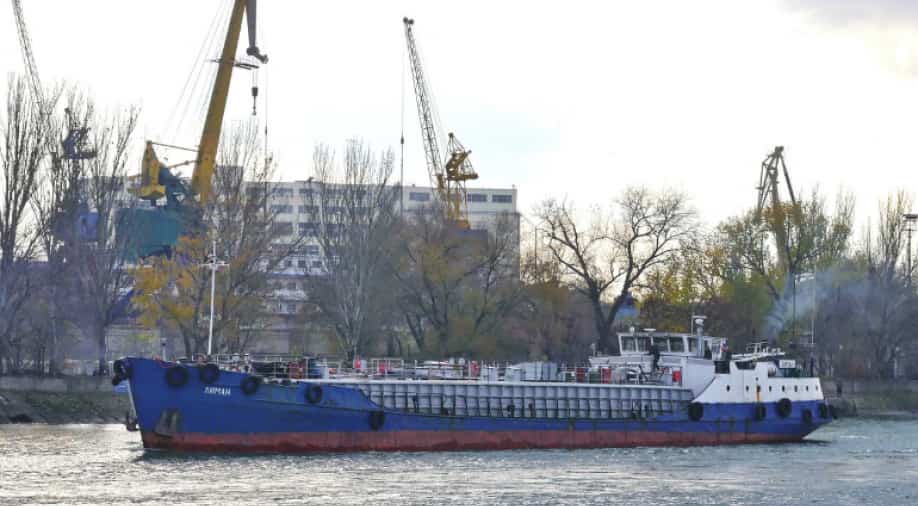 The merchant fuel ship which sank off the coast of Gabes in Tunisia on April 15, 2022 is seen this handout picture taken in Rostov-on-Don, Russia Photograph:( Reuters )

The seven-member crew of the ship were also evacuated by the authorities in Tunisia. The Equatorial Guinea-flagged ship had started to taking water around seven kilometres off Tunisia's southeast Gulf of Gabes

In what could turn into an "environmental disaster", a fuel-laden ship has sunk off the coast of Tunisia on Saturday.

The ship, which was carrying diesel fuel from Egypt to Malta, had ran into difficulty near Tunisia’s coast.

The ship has over 750 tonnes of diesel. It has sunk in the Gulf of Gabes, an AFP report said, citing a local court's spokesman.

Mohamed Karray told AFP, "The ship sank this morning in Tunisian territorial waters. For the moment, there is no leak. A disaster prevention committee will meet to decide on the measures to be taken."

Earlier, the authorities in Tunisia had said that the ship risks leaking and may result in an "environmental disaster".

In a statement, the environment ministry said that the merchant ship, Xelo, requested entry into Tunisian waters on Friday evening due to bad weather.

It also said that the ship's situation seems to be "alarming". It had also put in place an "urgent national intervention plan" to avert any untoward incident.

According to the environment ministry, the interior, defence, transport and customs ministries were making concerted efforts to avoid "a marine environmental disaster in the region and limit its impact." For now, the situation was "under control".

The seven-member crew of the ship were also evacuated by the authorities in Tunisia.

The Equatorial Guinea-flagged ship had started to taking water around seven kilometres off Tunisia's southeast Gulf of Gabes.