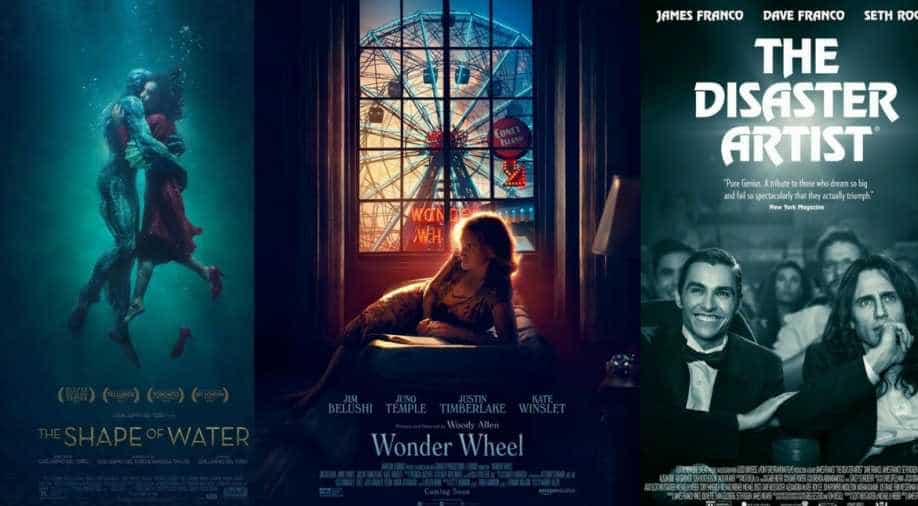 December 1 is big for limited Hollywood releases with several award-winning films making it to the theatres today.

Fox Searchlight is heading out with Guillermo del Toro’s latest, "The Shape Of Water" starring Sally Hawkins, Doug Jones, Michael Shannon, Octavia Spencer, Richard Jenkins and Michael Stuhlbarg. The movie will be seen exclusively in New York with its launch in two theatres.

The movie "The Shape Of Water" is the Venice Golden Lion winner that is among some fellow high-profile limited release titles on the first weekend of December.

Others making it to the theatres in a limited release today are Amazon Studios releasing Woody Allen’s "Wonder Wheel" with Kate Winslet -- the first title of the company without a distribution partner, James Franco’s "The Disaster Artist" -- making its way to 18 locations around the country via A24, Finnish director Aki Kaurismäki’s latest "The Other Side of Hope" opening this side of the Atlantic via Janus Films and Abramorama/Mongrel Media releasing documentary "Big Time" exclusively at one New York location.

The winner of the Golden Lion at this year’s Venice Film Festival, Fox Searchlight is opening Guillermo del Toro’s The Shape of Water at the Angelika and AMC Lincoln Square exclusively in New York this weekend. Del Toro conceived the project while working on TV series "The Strain". "The Shape of Water" had a long standing ovation at its World Premiere in Venice, picking up the festival’s top prize.

The movie is “an other-worldly fable” set against the backdrop Cold War-era America circa 1962. In the hidden high-security government laboratory where she works, lonely Elisa (Sally Hawkins) is trapped in a life of isolation. Elisa’s life is changed forever when she and co-worker Zelda (Octavia Spencer) discover a secret classified experiment.

Following its exclusive two runs in New York this weekend, the title will expand to 12 markets to between 35 – 40 theatres on December 8. Searchlight plans to have "The Shape of Water" in 700 to 800 theatres by December 22.

In "Wonder Wheel", four peoples’ lives intertwine amid the hustle and bustle of the Coney Island amusement park in the 1950s: Ginny, an emotionally volatile former actress now working as a waitress in a clam house; Humpty, Ginny’s rough-hewn carousel operator husband; Mickey, a handsome young lifeguard who dreams of becoming a playwright; and Carolina, Humpty’s long-estranged daughter, who is now hiding out from gangsters at her father’s apartment.

Amazon Studios is opening "Wonder Wheel" Friday in five theatres in New York and Los Angeles. The title will expand to the top ten markets next weekend and will go nationwide in its third frame.

The movie "Disaster Artist" came into the limelight after the SXSW Film Festival. Warner Bros/New Line had the rights to the feature film, but no date had been set at the time.

The film is the true story of Tommy Wiseau and Greg Sestero who become friends after meeting in an acting class in San Francisco. Hoping to achieve Hollywood stardom, Sestero moves to Los Angeles and signs on to appear in his buddy’s project. Financed with his own money, Wiseau writes, directs and stars in "The Room", a critically maligned movie that becomes a cult classic.

Franco became familiar with the story through the memoir "The Disaster Artist: My Life Inside The Room" by Greg Sister and Tom Bissell. While filming "The Interview (2014)" with Seth Rogen, Franco brought up the idea of a possible project based on the book.

A24 will open "The Disaster Artist" in 18 locations in key markets around the country including Lincoln Square and Union Square Stadium in New York as well as Century 15 and The Landmark in Los Angeles.

Finnish filmmaker Aki Kaurismäki won the Silver Bear at the Berlin International Film Festival earlier this year for "The Other Side of Hope". The film is a follow-up to Le Havre (2011).

The "Other Side of Hope" tells the story of an unlikely friendship between Khaled (Sherwan Haji), a Syrian asylum seeker from Aleppo, and Wikström (Sakari Kuosmanen), a fifty-something traveling salesman who’s left his alcoholic wife and purchased a restaurant in the back streets of Helsinki with his meager winnings from poker. When the authorities decide to return Khaled to the ruins of Aleppo he opts to stay illegally in the country and disappears into the streets of Helsinki, where he meets racism as well as pure kindness. Wikström finds Khaled sleeping in the inner yard of his restaurant and seeing something of himself in the battered man, hires him as a cleaner and a dishwasher. Together, they help each other through the challenges they face in their unfamiliar and often baffling new worlds.

Janus Films will open the movie in three theatres in New York and L.A. this weekend including Film Forum and the Film Society of Lincoln Center in NYC as well as the NuArt in Los Angeles.

In the movie "Big Time", the plotline follows Danish architect Bjarke Ingels during the course of seven years (2009 – 2016) while he struggles to finish his biggest project so far. We are let into Bjarke’s creative process as well as the endless compromises that his work entails.

The movie will have an exclusive start at The Landmark 57 West on Manhattan’s west side which is located in a new building designed by Ingels. In addition to the theatrical run, the documentary will be available on-demand via iTunes and other digital media starting February 27, while its Netflix window begins April 1.