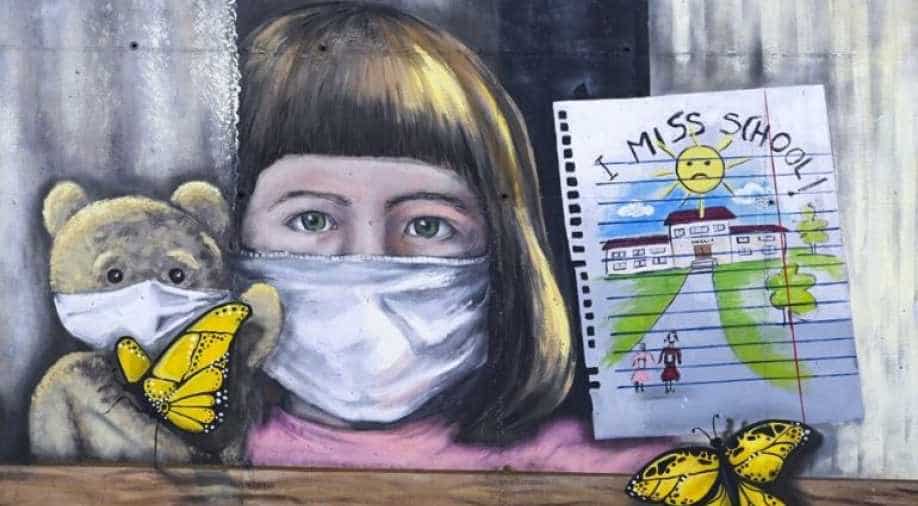 A graffito depicting a girl and a teddy bear wearing face masks that reads "I miss school" is pictured in the town of Ferizaj on June 7, 2020, amid the outbreak of the COVID-19 pandemic, caused by the novel coronavirus Photograph:( AFP )

The research team had evaluated 1,717 policies in the six major countries to arrive at the conclusion

According to a study on coronavirus by Imperial College London published in Nature, the "death toll would have been huge without lockdown" but it warned that it is still "at the beginning of the pandemic".

"Our model suggests that the measures put in place in these countries in March 2020 were successful in controlling the epidemic by driving down the reproduction number and significantly reducing the number of people who would have been infected by the virus,” Dr Seth Flaxman from Imperial College said in his study.

The Imperial College study focussed its study on eleven European countries including Italy, Spain, Germany, Denmark, Austria, Sweden, Switzerland, UK among others till May.

The study said 3.2 million people would have died by May 4 if the shutdown and stay-at-home measures weren't adopted.

Dr Samir Bhatt at the Imperial College said: “This data suggests that without any interventions, such as lockdown and school closures, there could have been many more deaths from COVID-19."

In another study, research from a UC Berkeley also published in Nature found that emergency health measures adopted in China, South Korea, Italy, Iran, France, and the United States “significantly and substantially slowed” the spread of the novel coronavirus".

The study found that stringent travel restrictions and school closures and "other non-pharmaceutical interventions averted roughly 530 million COVID-19 infections across the six countries."

"Continuation of these policies after the study period has likely avoided many millions more infections," it added.

The research team had evaluated 1,717 policies in the six major countries to arrive at the conclusion.

"April and May would have been even more devastating if we had done nothing, with a toll we probably can’t imagine," lead author Solomon Hsiang said.