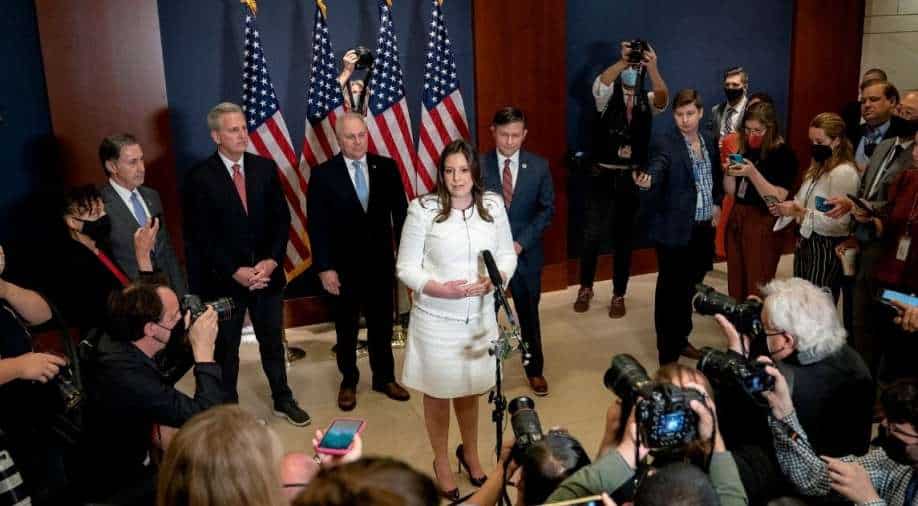 Rep. Elise Stefanik (R-N.Y.) speaks to reporters on Capitol Hill in Washington, on May 14, 2021. Once a mainstream Republican from a moderate district, Ms. Stefanik, the party’s No. 3 House leader, has embraced Trumpism and the extremists in her ranks. (Stefani Reynolds/The New York Times). Photograph:( The New York Times )

In an interview on the sidelines of the party retreat, her reinvention was on vivid display. Stefanik repeated Trump’s lies about the 2020 election being stolen and refused to acknowledge Biden as the legitimately elected president

On the second floor of an upscale golf resort near Jacksonville, Florida, this past week, House Republicans gathered for drinks as they kicked off a three-day retreat to plot their path to winning the majority in this year’s midterm elections.

Rep. Jim Jordan of Ohio, dressed down in a fleece vest, stood in one corner while Rep. Marjorie Taylor Greene of Georgia hustled in and out of the reception area. But it was Rep. Elise Stefanik of New York, the No. 3 Republican and an architect of the party’s message, who was running the show, working the room with her 7-month-old son on her hip.

A year ago, the same House Republican retreat was fraught with drama as Rep. Liz Cheney of Wyoming, who then held the third-ranking leadership post, publicly denounced former President Donald Trump’s election lies. That prompted a backlash from other Republican leaders, who swiftly moved to oust her and install Stefanik in her place.

This year, with Stefanik acting as the event’s organizer and emcee, there was little dissent on display. Inflation, immigration and President Joe Biden’s failures were played up, while Trump’s false claims of fraud in the 2020 election and his denial of any responsibility for the Jan. 6 attack on the Capitol did not even merit a mention — a mark of how thoroughly the party has rallied around the former president.

That Stefanik, 37, would be hosting this particular party seemed fitting. A once-moderate Republican who worked in President George W. Bush’s White House and was a protégé of former Speaker Paul Ryan, she is the embodiment of the rapid shift in the Republican Party. In just a few short years, she has morphed from the conservative mainstream into an unlikely star of the MAGA universe and a die-hard Trump loyalist.

In an interview on the sidelines of the party retreat, her reinvention was on vivid display. Stefanik repeated Trump’s lies about the 2020 election being stolen and refused to acknowledge Biden as the legitimately elected president.

“Joe Biden is in the White House right now — the American people understand that — but they do have questions,” she said in between a lunch with former Secretary of State Condoleezza Rice and a dinner with the author of a book called “Woke, Inc.”

“In my district, I still get questions about it,” Stefanik said, adding, “I think there are constitutional questions on the unconstitutional overreach of unelected individuals in states like Pennsylvania.”

And as her party veers toward extremism, Stefanik has refused to condemn the Republicans who speak most loudly to the fringe. Asked about Greene, who recently spoke at a white nationalist event, and Rep. Madison Cawthorn of North Carolina, who has called President Volodymyr Zelenskyy of Ukraine a “thug,” she said the two were merely reflecting the views of the voters in their districts.

“They represent their constituents, and they are held accountable for the statements they make,” Stefanik said, noting the House Republican conference as a whole did not share their views.

It has been a rapid transformation. Stefanik, who graduated from Harvard, was once seen by Democrats as a bright spot in the Republican Party, someone who was going to dig into policy issues on the House Intelligence Committee, which she joined in 2017.

In private conversations, Stefanik sometimes conceded to former colleagues and confidants that Trump was a disaster for the party, although she said she did not see an upside to publicly criticizing him. She vented to confidants that the administration made “dumb” decisions that left Republicans in Congress shouldering the blame — frustrated, for example, at Trump’s on-again, off-again backing of sweeping immigration legislation to grant legal status to unauthorized immigrants brought to the United States as children, often known as Dreamers.

(A senior adviser to Stefanik, Alex deGrasse, said she never made those comments about Trump and his administration.)

But these days, Stefanik is a loud and unapologetic Trump acolyte, even defending his praise of President Vladimir Putin of Russia. (“I think that President Trump was saying that Vladimir Putin assessed the weakness of Joe Biden, and unfortunately took advantage of it,” she said, noting that Putin was a war criminal.)

While some Republicans have tried to walk a careful tightrope, supporting Trump’s policies while distancing themselves from his false claims about the stolen election, Stefanik makes no such qualifications.

“I speak to President Trump frequently,” she said. “He’s an incredibly important voice in terms of growing the party among the working class.” Asked whether Trump’s influence on the GOP was on the wane, she flatly rejected the notion.

“No, it’s on the rise,” she said. “Especially now that voters have regrets about voting for Joe Biden.”

Stefanik, who previously said she would serve only one term in leadership, is also on the rise within her party’s ranks. She could lead a powerful House committee or throw her hat in the ring in what is expected to be a competitive race for whip. Part of her success in leadership, aides said, is based on her effort to help elect more Republican women to Congress through her political action committee, which has also helped her build a network of support in her conference.

She has worked hard to win over detractors who question her conservative bona fides and is now broadly popular among Republicans, including right-wing members who were once suspicious of her mainstream background. The biggest help in that effort has been the support of Trump, who does not care about her more centrist past when she has shown him total fealty.

Trump, people close to him said, would be more than happy to see Stefanik make history as the Republicans’ first female speaker, although he does not plan to get involved in the race for the post and would be unlikely to stand in the way of Rep. Kevin McCarthy, the minority leader, if Republicans succeed in winning back the House majority. But his constant praise of Stefanik serves as a reminder that she has passed a loyalty test with Trump that McCarthy has not.

Trump speaks with Stefanik multiple times a week and describes her as “one of my killers,” thanks to her key role as his chief defender on the House Intelligence Committee during his first impeachment trial.

Her opportunism is criticized by her detractors, but celebrated by some on the hard right, who think she has revealed herself as someone willing to go to any length to rise.

At a recent fundraiser in Palm Beach, Florida, Trump even floated her name as a potential presidential candidate in 2028.

“I’m not going to even engage in that,” she said when asked about her future in House leadership. “I’m supporting Kevin McCarthy for speaker. I don’t measure the drapes. It’s a long time between now and the November election.”

(Seeking to downplay any hint of rivalry, Stefanik’s aides noted that McCarthy not only attended her wedding in 2017, but also campaigned for her at a biker bar in upstate New York during her first race.)

Her political metamorphosis has come with heady rewards for an ambitious politician: a prime-time speaking slot at the Republican National Convention in 2020 and a jet-fueled rise in the ranks of her party.

“Congress has gotten tougher and rougher,” said Rep. Tom Cole, R-Okla. “She didn’t start that. She’s proven she knows how to mix it up, and that’s one of the qualities we look for in a conference.”

But Stefanik’s political calculation stunned the networks she had spent her life cultivating. She lost many of her college friends from Harvard and was asked to step aside from her role on the senior advisory committee of the university’s Institute of Politics because of her false assertions of voter fraud in the 2020 election.

Her onetime mentor Ryan declined to comment about her for this article, although aides to both said they are still in touch regularly.

Many friends and former colleagues think she made a cynical, short-term political gamble in her full-bore turn to Trumpism. Some have tried to warn her at various points along the road, but received a stony response.

Melissa DeRosa, a childhood friend of Stefanik’s who served as a secretary to former Gov. Andrew Cuomo of New York, said she had reached out in 2019 after seeing Stefanik’s performance during the impeachment hearings.

“I’m really concerned you’re doing these things that will damage your credibility in the long term,” she recalled texting Stefanik.

DeRosa said the reply was polite but curt. “She wrote back saying, basically: ‘You should always feel like you can tell me what you think. I appreciate your input.’” It was the end of the conversation.

Other former friends and mentors said they found her shape-shifting depressing. Bill Kristol, a prominent Never Trump conservative, said he once viewed her as a rising star in the party.

“I introduced her to donors and contributed to her campaign in 2014,” Kristol said, noting that at a meeting in her office in 2018 she privately agreed with him that Trump was a liability. “She seemed like a responsible elected official. Wrong.”

To explain her transformation, Stefanik points to the rightward lurch of her onetime swing district, which voted for Barack Obama and was represented by a Democrat before she flipped the seat in 2014 and the district became Trump country.

“I believe that my record and my time in Congress is reflective of my constituents,” she said.

Privately, she has told people she was “radicalized by Adam Schiff,” the Democratic chair of the Intelligence Committee who led the first impeachment effort against Trump.

Other members of the panel say that as Stefanik grew more partisan about the impeachment, her attendance at committee events and briefings dropped to almost zero.

Back home, in a district that has become redder in the redistricting process, Stefanik has only grown safer politically. “When you live in an area like this, it’s a little bit of a quiet area,” said Jeff Graham, a conservative radio host and the former mayor of Watertown. “If you see your member of Congress on the news, you feel good about it.”

Still, there are awkward moments.

Last fall, when Stefanik was at an apple orchard in Saratoga County with her husband and her newborn son, a woman who grew up in the North Country region approached her and told her bluntly how she thought the congresswoman had compromised her values for power.

In an interview, Stefanik said she recalled the incident but refused to believe the woman was from her district.

“Not a voter,” she said firmly. “Not a constituent.”