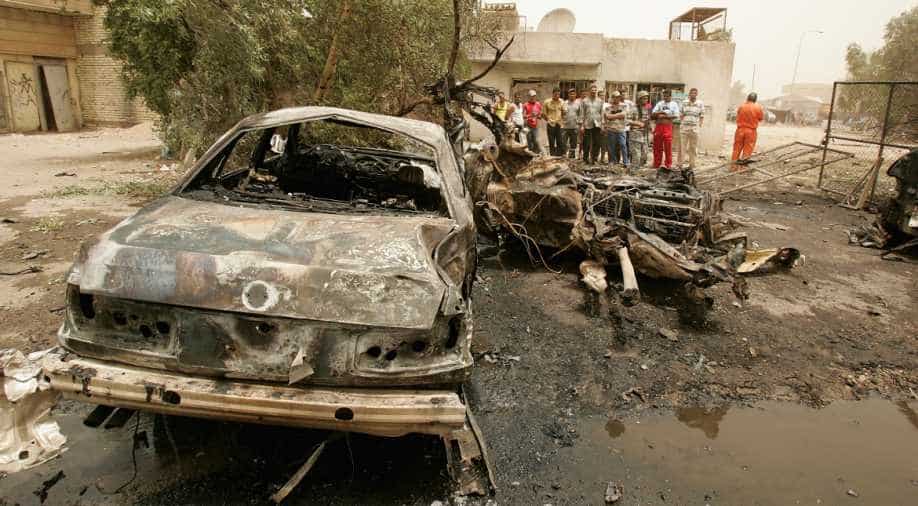 The attack was a car bomb near a restaurant and burned shops in the area. In photo: Iraqis look on June 9, 2008 at cars damaged in a car bomb explosion in Baghdad, Iraq. Photograph:( Getty )

Follow Us
Several dozen people were killed or injured in two bombings that hit a shopping area and a popular market in Baghdad in the early hours of Sunday as they observed Ramzan, local TV channel al-Sumaria said.

Islamic State claimed responsibility for a suicide car bomb in the Karrada shopping area, in a statement circulated online by supporters of the ultra-hard line Sunni group.

The car bomb blew up near a restaurant in Karrada, killing or wounding at least 20, the independent al-Sumaria channel said, citing police sources. Iraqis like to eat out late during the Muslim fasting month of Ramzan which ends next week.

A video posted on social media showed a large blaze in main street of Karrada from the blast.

The second bombing hit al-Shaab, a popular Shi'ite district in the north of the Iraqi capital, leaving a number of casualties, the station said.

Iraqi forces last month dislodged Islamic State militants from Fallujah, their stronghold just west of the capital that served as a launch pad for such attacks.