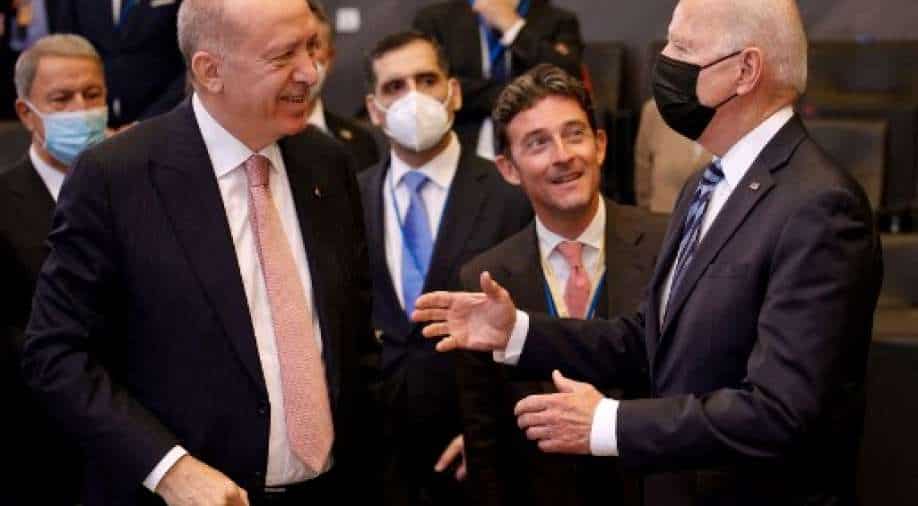 The Trump administration had pushed out Turkey from the F-35 program over the procurement of the S-400 missile defence system.

President Tayyip Erdogan said he told US President Biden during the NATO meeting that Turkey will not take a different step on the F-35 jet and S-400 missile issues.

Erdogan's had ordered Russia's S-400 missile defence system which has strained ties with the United States as the former Trump administration came down hard on the Turkey government.

The US had barred Turkey from the F-35 fighter jet programme over fears that Russia could collect intelligence amid the S-400 deployment.

Top US official Wendy Sherman who is the deputy secretary of state had offered Turkey to move the S-400 missile systems into joint custody at an airbase on the Syrian border, however, it was rejected by the Turkish government.

"I told (Biden) that they should not expect Turkey to take a different step on the F-35 and S-400 issues because we did what we had to for the F-35s and gave the necessary money," Erdogan said as Turkey and US continued their stalemate over the issue.

The Trump administration had pushed out Turkey from the F-35 program two years ago over the procurement of the S-400 missile defence system.

In a statement, the Pentagon had said "the S-400 is incompatible with the F-35" while suspending Turkey from the program. Turkey had bought the first of the four S-400 missiles in July 2019 as the former Trump administration moved to remove Turkey from the  F-35 program.

The Biden administration has since tried to negotiate with Turkey over the Russian missile deal but has been unsuccessful.

Erdogan asserted that his government would be monitoring the developments and following up even as no breakthrough over the S-400 deal has been achieved by the two sides.