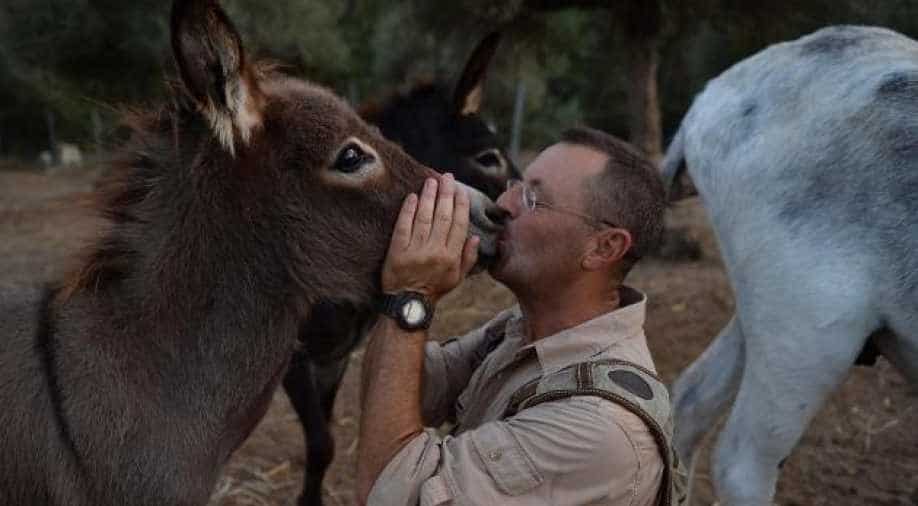 Although such therapy is more associated with horses, experts say donkeys are better suited to helping mental or emotional disorders given their gentle nature and intuitive respect for personal space.

In Spain, donkeys are now holding the key to destressing and relaxation, especially when it comes to medical professionals. To this end, the association by the name of "The Happy Little Donkey" offers free donkey therapy sessions to medics fighting the virus.

Known as animal-assisted therapy, such encounters with animals can help with a range of physical and mental disorders, including stress, depression and anxiety.

Although such therapy is more associated with horses, experts say donkeys are better suited to helping mental or emotional disorders given their gentle nature and intuitive respect for personal space.

Located by a sprawling forest on the edge of Andalusia's Donana National Park in southern Spain, El Burrito Feliz is a non-profit association with 23 donkeys that have worked with Alzheimer's patients and children with problems.

The "Doctor Donkey" project began in late June as a way of offering respite to frontline workers battling a virus that has killed some 33,400 people, infected more than 900,000, and left medics traumatised and exhausted.

"The huge stress created through the daily struggle with Covid-19 exhausts them, so here they can be strengthened through therapy with the donkeys," explains Luis Bejarano, 57, who runs El Burrito Feliz.

Bejarano says the idea came from a book about Japan's therapeutic forests where people spend time among trees to reduce stress and depression as an alternative to therapy.

And the risk of falling ill is very real, with one in 10 of Spain's healthcare workers getting infected -- twice that of the general population and one of the highest rates in the world.

After befriending one of the donkeys, a visitor will go on a guided walk and when confident, they can go back into the forest alone with the donkey and stay as long as they like.

Back at base camp, they prepare food for the animals, and then there is the option of a "donkey bath" -- entering the paddock for an immersive experience with the herd.

Studies show that animal-assisted therapy triggers changes at a physiological level, activating oxytocin, conected to experiencing pleasure, increasing endorphins and reducing cortisol in the blood which is a product of stress, she said.

So far, 25 doctors and nurses have visited the project, although the pace has slowed as cases have spiralled and Spain's medics have found themselves battling one of the highest infection rates in the European Union.

Although the project was only supposed to run until November, Bejarano is extending it and even considering installing lodgings so people can stay overnight.