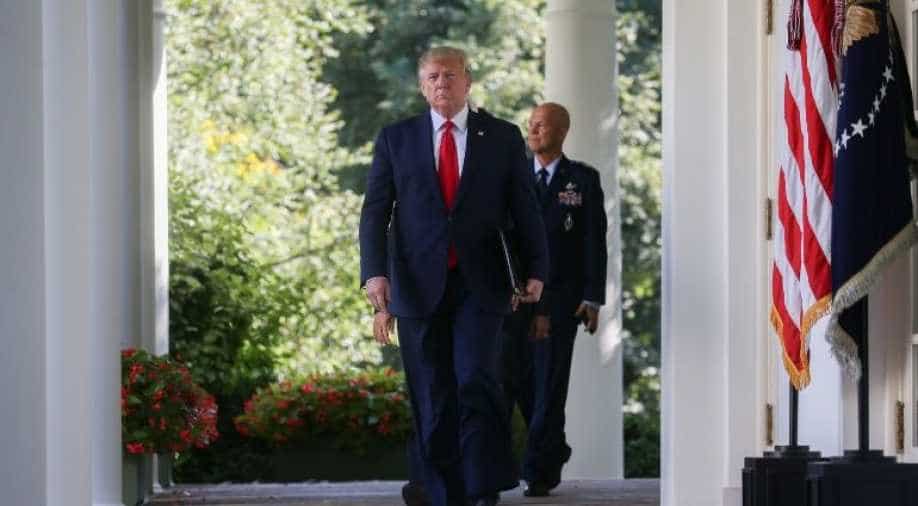 Trump faces the possibility of becoming only the third president ever impeached by Congress, which could lead to his going on trial in the Senate.

Donald Trump on Tuesday denounced the impeachment inquiry threatening his presidency as a "coup," as his administration pushed back hard against the investigation.

Trump's comments came after Secretary of State Mike Pompeo pressed to prevent or delay five former or current State Department staffers from testifying in the investigation probing accusations that Trump abused his office by seeking dirt from Ukraine on a 2020 election rival.

"As I learn more and more each day, I am coming to the conclusion that what is taking place is not an impeachment, it is a COUP," Trump tweeted.

It is "intended to take away the Power of the People, their VOTE, their Freedoms, their Second Amendment, Religion, Military, Border Wall, and their God-given rights as a Citizen of The United States of America!" he wrote.

"The Greatest Witch Hunt in the history of our Country!" he said.

Pompeo meanwhile accused three Democratic House committee heads conducting the impeachment inquiry of "an attempt to intimidate, bully and treat improperly the distinguished professionals of the Department of State."

But Democrats accused the top US diplomat of "stonewalling" the investigation and, according to media reports, scheduled interviews with at least two of the diplomats who both had direct involvement in the Ukraine matter.

It was the first major clash of the days-old impeachment probe, pointing to a dramatically mounting political and legal siege as Trump battles to save his presidency.

Trump faces the possibility of becoming only the third president ever impeached by Congress, which could lead to his going on trial in the Senate.

Biden is the most likely Democrat to challenge Trump's reelection bid next year.

The first move of the three powerful House Democrats -- Adam Schiff of the Intelligence Committee, Eliot Engel of the House Foreign Affairs Committee and Elijah Cummings of the Oversight Committee -- was to subpoena Pompeo and Trump's private lawyer Rudy Giuliani for documents and to summon the five diplomats to testify.

"Secretary Pompeo was reportedly on the call when the President pressed Ukraine to smear his political opponent," they said.

Pompeo's letter suggested that the committees could be forced to subpoena the five diplomats, and that the State Department and White House could seek to limit what they can talk about.

"I will use all means at my disposal to prevent and expose any attempts to intimidate the dedicated professionals whom I am proud to lead," Pompeo said.

But news reports said the State Department's former special envoy to Ukraine, Kurt Volker, would testify Thursday and that the ex-ambassador to Kiev, Marie Yovanovitch, would appear behind closed doors on October 11.

Volker had been sought by Giuliani to help pressure Zelensky, while Yovanovitch was removed earlier this year as ambassador after she reportedly resisted that effort.

The three committee heads warned Pompeo in a statement Tuesday that any effort to prevent witnesses from speaking to them was "illegal and will constitute evidence of obstruction of the impeachment inquiry."

Trump's personal lawyer Rudy Giuliani suggested he might not comply with a House subpoena issued on Monday.

Giuliani spent months earlier this year contacting Ukraine officials to encourage them to investigate Biden, whose son had business ties to Ukraine.

While Pompeo and Giuliani battled the House committees, Trump also stepped up his personal attacks on Schiff, the leader of the impeachment investigation, as well as the anonymous whistleblower.

"Why isn't Congressman Adam Schiff being brought up on charges for fraudulently making up a statement and reading it to Congress," he asked.

"It is just another Democrat Hoax!"