Donald Trump and his tiny desk; #DiaperDon trends on Twitter 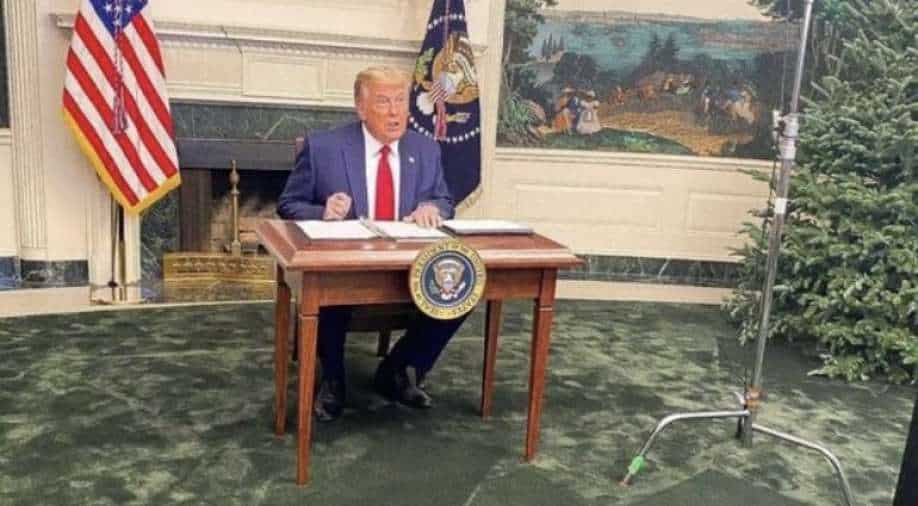 Donald Trump's presidency is coming to an end, but it seems like his antics will seem to continue and entertain the Twitterati till the end of his days in the White House.

During the Thanksgiving press conference, the outgoing US President was pictured sitting behind a tiny desk —which was much smaller than the usual Presidential desk commonly used by the US Presidents.

As soon as the internet caught hold of the glimpse, people were happy to point out the similarities between Trump's '#TinyDesk' and the other miniature tables, such as one found in a doll's house.

Just in time for Christmas!#DiaperDon #tinydesk

(Who ever did this is my hero) pic.twitter.com/6nlHoJtdIw

I really thought this was photoshopped. Someone on his team really hates him.😂😂😂 #tinydesk pic.twitter.com/B391BurTQI

I fixed it, and at least this guy can read. #tinydesk pic.twitter.com/D3IHtdDvkP

I see no difference #tinydesk pic.twitter.com/6mRpPaIzaB

If this were a “spot the differences” game, two stand out. 1: The kid isn’t wearing a diaper. 2: The kid actually as something to write with. #DiaperDon #tinydesk #TrumpTantrum pic.twitter.com/zFGmM8gcVV

However, some people also tried explaining Trump's choice of the 'tiny desk' explaining the table is specially designed and used for signing documents. However, while Trump sat at the table alone, usually the President — and a few other world leaders who have been pictured with similar-sized desks — use this table specifically for signing documents and is pictured with other leaders, and never alone.

C'mon y'all. It's not unusual for the President to sign things at a #TinyDesk. What's funny is no crowd. The small desk is there to make room for invited guests. #TrumpTantrum #ByeDon pic.twitter.com/GKxZ9tJFKW

Thanksgiving press conference was the first one since his defeat in the elections, where Trump allowed the media to ask questions. However, he did not guarantee an answer (with calmness) to every reporter — much like his previous pressers.

The presser will also be remembered for Donald Trump's demand for 'respect' by a local reporter who repeatedly kept asking the outgoing President if he would be willing to concede to the President-elect Joe Biden. Trump got annoyed by the repeated questions and before moving on to another question, snapped back at the reporter and said, "I'm the president of the United States. Don't ever talk to the president that way."

This press conference is usually held in the White House every year to observe the holiday with the president, and sometimes, the President(s) also answer questions of the invited reporters.