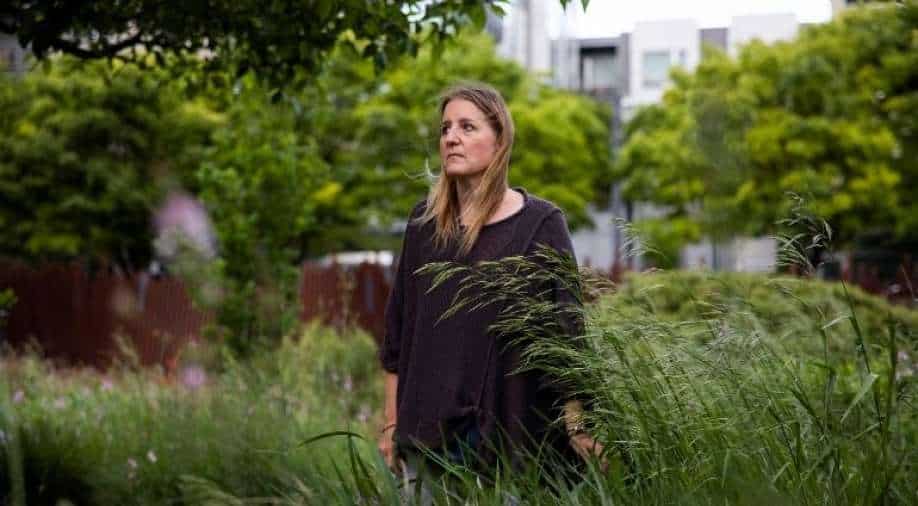 Tania Culver Humphrey, the daughter of Mercy Corps co-founder Ellsworth Culver, in Portland, on May 18, 2021. She had accused her father of years of sexual abuse. (Alisha Jucevic/The New York Times) Photograph:(The New York Times)
Follow Us

The apology came as Mercy Corps released an independent report it had commissioned that described horrifying accounts from Culver Humphrey of abuse that extended far beyond her childhood home near Portland, Oregon.

For nearly two decades, the global aid organization Mercy Corps had operated with a troubling secret: A daughter of one of the group’s longtime leaders, co-founder Ellsworth Culver, had accused him of years of sexual abuse.

When his daughter Tania Culver Humphrey first came forward with the allegations in the early 1990s, the leadership of the international nonprofit organization was largely dismissive and allowed Culver to stay on in an executive role. But on Wednesday, after an extensive accounting of how the organization handled a case that eventually reached around the world, Mercy Corps apologized for what it acknowledged were “extensive failures.”

“We feel deep regret that Mercy Corps failed in its responsibility in 1992 and 1993 to understand the extent of the abuse, assist in pursuing justice, and potentially prevent further harm,” the organization’s board members said in a statement.

The apology came as Mercy Corps released an independent report it had commissioned that described horrifying accounts from Culver Humphrey of abuse that extended far beyond her childhood home near Portland, Oregon.

Speaking to investigators for more than 100 hours, Culver Humphrey reported that both before and during his time at Mercy Corps, her father brought her on international work trips, offering her for sex to men. Other young girls in those countries were also being exploited, she told investigators, including one she says died in a Thai hotel after a night of “severe sexual and physical abuse.”

The independent investigators did not reach conclusions about the veracity of the allegations and wrote that in examining Culver’s activities around the world, they were not able to find witnesses who recalled seeing or hearing about abusive behavior. But the investigators noted that Culver Humphrey’s accounts matched up with travel records, and their report seemed to accept that abuse did occur, referring to her as “the survivor.”

The investigators noted that they had not felt the need to reinterview several of Culver Humphrey’s childhood friends, who for an investigation published by The Oregonian had corroborated her accounts of abuse that had occurred at or near her home.

Culver Humphrey said she had been distressed by the failure of the organization to much earlier conduct a serious investigation into the allegations about her father, who died in 2005. But she commended Mercy Corps and its new leadership for the effort it had undertaken in recent months.

“It’s been extremely hard and painful, but there was definitely this genuine effort to figure out how to be transparent with something so awful — and take accountability for it,” she said in an interview. “I want it to be a new standard for other organizations.”

Mercy Corps got its start in 1979 with a focus on refugees in Cambodia but grew to operate across the globe, with 5,600 people operating in 40 countries with half a billion dollars in annual donations and other revenue. Culver, who had previously worked with the aid organizations World Vision and Food for the Hungry, helped start Mercy Corps in the early 1980s and became its president in 1984. He was later granted the title of co-founder.

Culver Humphrey, 50, told investigators that her father began abusing her in her early childhood in the 1970s and that the abuse persisted into her teenage years, sometimes involving a variety of perpetrators at Mercy Corps’ headquarters in Portland.

Medical records she provided show that she had reported details of her father’s abuse to counsellors in the 1980s. In 1992, she talked about the abuse at a women’s prayer group, where someone passed along information that ultimately came to the attention of Mercy Corps’ leadership.

But the investigators this week announced a number of failures in how the allegations were handled: Mercy Corps leaders disclosed the investigation to Culver, who was then the president and chief executive, despite his daughter’s request that he not be informed. After that, the report said, the organization seemed to accept his contention that his daughter had reported false memories, showing him “undue deference” and failing to ensure the allegations were fully investigated.

Culver resigned from his position as president in 1994 but continued as vice president. This week’s independent report found that the organization had failed to fully investigate or take action on the reports about Culver. In one email noted in the report, a former board member sent a letter to the Mercy Corps leadership in 2018 regarding Culver, saying, “I saved his job and career when he was accused by his daughter.”

Culver Humphrey, who now lives in Portland with her husband and two children, approached Mercy Corps again in 2018, asking the organization to take a closer look at how her complaints had been handled in the past. The organization responded to her in a letter, standing by its initial assessment that there was “insufficient evidence” to support her claims against Culver.

That changed after the article in The Oregonian in 2019 detailed some of Culver Humphrey’s allegations and quoted witnesses who corroborated details of her story, including a childhood friend, Michelle Green, who reported that Culver had sexually abused her, too.

The allegations went beyond what she had earlier reported occurred with her father at their home in Portland and included her claims, not reported in the earlier Oregonian article or an initial report released last year, that her father had taken her on business trips to foreign countries and arranged for her and other girls recruited locally to have sex with men.

In one account described in the report, Culver Humphrey said she was about 9 on one such trip when she and a local girl of about the same age were abused through the night by her father and another man. By the next morning, Culver Humphrey reported, the other girl was dead. Investigators said they were limited in their ability to corroborate the report but “reviewed documents and survivor statements which confirmed the timing and location of this trip as well as the relationship between both perpetrators.”

Culver Humphrey also reported witnessing her father abuse other children brought in during another business trip, according to the report. She told investigators that on a trip to Honduras her father arranged an encounter in which a foreign military officer sexually abused her. She estimated that she was 13 or 14 at the time and said her father told her it would “help other children” by supporting the work of Mercy Corps, according to the investigation.

Some of the allegations appeared to date back to the years before Culver was at Mercy Corps, when he was an executive vice president at Food for the Hungry, a relief organization based in Arizona. The group said in a statement Wednesday that it was “deeply saddened by the sexual assault reports that came to light against Ellsworth Culver” but said it had seen no reports of incidents related to Culver from his time at the organization from 1978 to 1982.

D’Oyen McKenna, the chief executive of Mercy Corps, said the organization was horrified by the revelations and had shared information on the participants and incidents included in the report with the FBI.

“We acknowledge this ugly piece of our history, but this will not be our legacy,” she said. “This has profoundly changed Mercy Corps.”

The FBI in Portland said it could not discuss whether there was any active investigation.

Culver Humphrey said that while it appears Oregon’s statute of limitations on such abuse currently prevents prosecution for those who she said abused her in the Portland area, she is hopeful there might be some pathway to criminal accountability.

The report described Culver Humphrey’s account of how her father would take photos of her, posing her and other victims. Two of Culver Humphrey’s childhood friends — Theresa deSousa and Kami Golden — both said in interviews with The New York Times that they recalled seeing photos in a drawer at the Culver home that depicted nude young girls who were dark-skinned. Both recalled recognizing at the time that the photos were inappropriate.

Another friend, Karin Keita, said she recalled talking to Culver Humphrey early in high school about her father’s abuse. Culver Humphrey would sometimes appear with marks around her neck that she said her father had caused, Keita said, and she recalled being mortified at watching Culver hold his hand on Culver Humphrey’s upper thigh on one occasion and, on another, lie on top of her, kissing her on the lips for an extended period.

Culver Humphrey said she had an opportunity to address the members of the Mercy Corps board this week. She said the board members listened without a hint of defensiveness. She cried. Board members cried.

“That’s how things actually get done,” Culver Humphrey said. “If people can feel safe enough to talk about what’s happened to them and we can bring this out, it’s hard and it’s awful and it’s terrible, but that’s how things will eventually get better. It’s going to save people’s lives.”