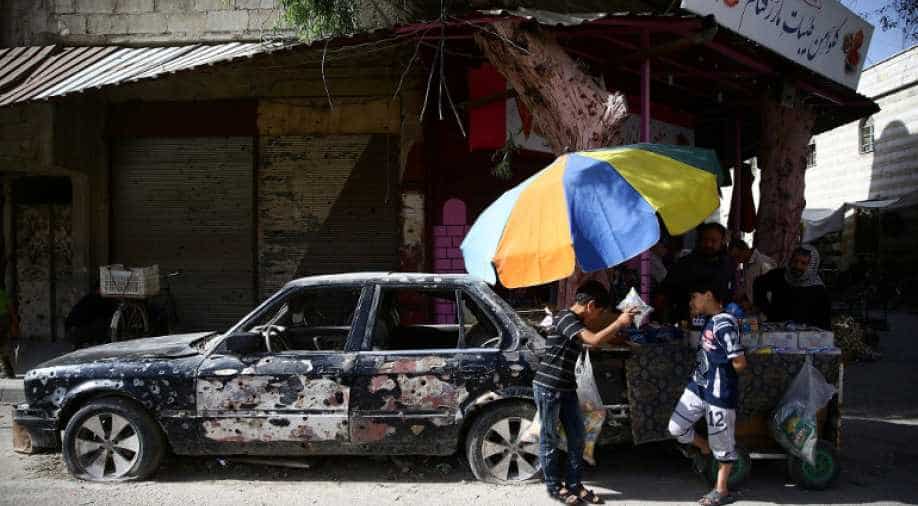 The Syrian Observatory for Human Rights monitor also reported that rebels in the district had agreed a deal to evacuate, but said it was not yet clear where the fighters would go. Photograph:( Reuters )

Syria's government has reached a deal with rebels in the Qabun neighbourhood of Damascus for the evacuation of opposition fighters, Syrian state media and a monitor said on Saturday.

The deal comes after similar evacuations from neighbouring rebel-held Damascus districts and a government advance in Qabun.

"Military operations halted in Qabun district this afternoon after the terrorist organisations announced their acceptance of a deal and the departure of their remaining members from the neighbourhood," state news agency SANA reported on Saturday.

The Syrian Observatory for Human Rights monitor also reported that rebels in the district had agreed a deal to evacuate, but said it was not yet clear where the fighters would go.

Earlier talks on a deal to allow the regime to retake the neighbourhood in exchange for safe passage of opposition fighters faltered over the rebels` destination.

Some had wanted to go to Eastern Ghouta, an opposition stronghold outside Damascus city, instead of Idlib province, a rebel-held area in northwest Syria.

Earlier Saturday, government forces had advanced inside Qabun, expanding their control to 80 percent of the district, the Britain-based Observatory said.

On Friday, upwards of 1,200 people, more than half of them rebels, left Barzeh and Tishrin for Idlib.

The evacuation of Barzeh began on Monday and continued Friday, when departures from Tishrin began after an agreement was reached.

The evacuations are the latest in a string of similar deals between the government and rebels under which opposition fighters are granted safe passage in exchange for surrendering.
The government touts the deals as the best way to end the six-year war, but rebels say they are forced into the agreements by regime fire and siege.

More than 320,000 people have been killed in Syria since the conflict began in March 2011 with anti-government protests.