Civilian toll rises to 14 in Turkey bombardment on Syria: Monitor 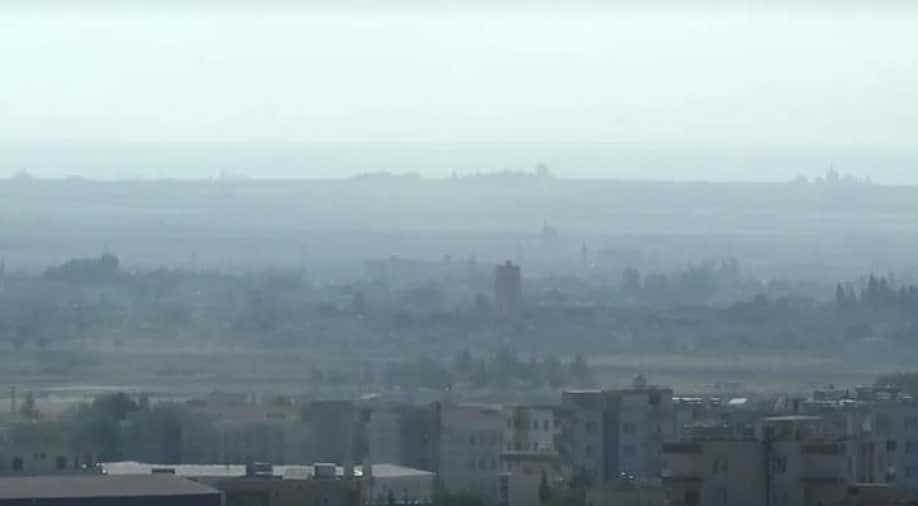 'Five civilians were killed in Turkish airstrikes on the village of Bab al-Kheir, east of Ras al-Ain,' Rami Abdel Rahman, head of the Syrian Observatory for Human Rights, said

Airstrikes by Turkey and mortar fire by its proxies killed nine more civilians near a flashpoint town in northeastern Syria, bringing Friday's civilian death toll to 14, a monitor said.

The ceasefire announced late Thursday was meant to provide a pause for the evacuation of Kurdish fighters from the battleground border town of Ras al-Ain and other areas Turkey wants to control along its border with Syria.

The five-day suspension looked designed to help Turkey achieve its main territorial goals without fighting but its Syrian proxies continued to clash with Kurdish fighters Friday.

The Britain-based war monitor said four fighters of the Syrian Democratic Forces -- the de facto army of the embattled Kurdish autonomous region -- were killed in the strike.

The incident took place even as a 200-vehicle convoy headed towards Ras al-Ain to evacuate civilians who have been virtually besieged there since the start of Turkey's cross-border assault on October 9.

Mustefa Bali, a spokesman for the SDF, said Turkey was clearly violating the terms of the agreement reached during a Thursday visit to Ankara by US Vice President Mike Pence.

"Despite the agreement to halt the fighting, air and artillery attacks continue to target the positions of fighters, civilian settlements and the hospital" in Ras al-Ain, he said.

Under the deal, Kurdish forces are required to withdraw from a border strip 32 kilometres (20 miles) deep, clearing the way for a "safe zone" sought by Turkey.

The Kurdish-led Syrian Democratic Forces (SDF) had said they were ready to abide by the ceasefire in border territory between Ras al-Ain and Tal Abyad to its west.

The Turkish offensive was sparked by US President Donald Trump's announcement of an American withdrawal from northern Syria, leading critics to accuse him of betraying Washington's Kurdish allies.

On Thursday evening, Trump said he allowed the two sides to fight for a few days before brokering a truce as they were like "kids in a lot".

The Turkish military and its Syrian proxies -- mostly Arab and Turkmen former rebels used as a ground force -- have so far seized around 120 kilometres (70 miles) of territory along the border.

More than 500 people have been killed on the two sides, including nearly 100 civilians, while around 300,000 have been displaced, according to the Observatory.

Kurdish forces have put up fierce resistance in Ras al-Ain, with a network of tunnels, berms and trenches that held off the Turkish onslaught for a week.

Ankara considers the Kurdish forces to be "terrorists" linked to Kurdish rebels inside Turkey.

Turkish forces and their allies had taken control of half of Ras al-Ain on Thursday when its hospital was hit, trapping patients and staff inside, Abdel Rahman said.

Kurdish authorities sent a medical team to rescue the wounded but it was prevented from entering the town, said Hassan Amin, a director of the hospital in nearby Tal Tamr.

"The situation of the wounded is critical and the number is high," he said, adding that seven wounded people from around Ras al-Ain were however evacuated to Tal Tamr.

Trump has come under sustained criticism in Washington over his handling of the crisis, not only from Democrats but from within his own Republican Party.

The SDF fought alongside US forces to defeat the Islamic State (IS) group in Syria and Iraq, but Trump argued it was no longer the US role to ensure calm in the region.

Thousands of IS fighters and their families are held in Kurdish-run jails across northern Syria.

The prospect of thousands of the world's most radical jihadists breaking out in the chaos caused by Turkey's invasion is causing widespread alarm.

The Turkish offensive has also been widely criticised, with videos surfacing online allegedly showing captured fighters and civilians being executed.

There was no immediate response from Ankara, which says all possible measures have been taken to avoid civilian casualties.

"Like two kids in a lot, you have got to let them fight and then you pull them apart," Trump told a rally in Dallas, Texas.