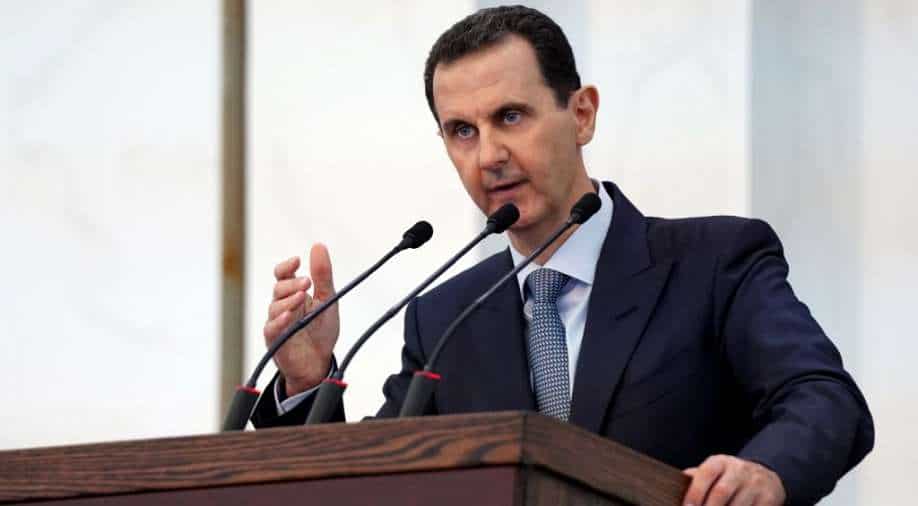 In a major step to hold Assad and his circle accountable for some of the worst atrocities committed in the decade-old Syria conflict, judges at a special war crimes unit in France’s palace of justice have received a complaint about chemical weapons attacks in Syria, filed by three international human rights groups

Chemical munitions experts have for years compiled information that Syria’s government has used these banned weapons against its own people, a war crime that so far has gone unpunished and been dismissed with a sneer by President Bashar Assad.

Now the first criminal inquiries that target Assad and his associates over the use of chemical weapons may soon get underway.

In a major step to hold Assad and his circle accountable for some of the worst atrocities committed in the decade-old Syria conflict, judges at a special war crimes unit in France’s palace of justice have received a complaint about chemical weapons attacks in Syria, filed by three international human rights groups.

The complaint, which lawyers said the judges would likely accept, requests a criminal investigation of Assad, his brother, Maher, and a litany of senior advisers and military officials that formed the chain of command.

Together with a similar complaint filed in Germany in October, the French complaint, submitted Monday and made public Tuesday, opens a new front aimed at ensuring that some form of justice for chemical weapons crimes is exacted on Assad and his hierarchy.

If nothing else, the criminal inquiries in France and Germany could vastly complicate the future for Assad, who has emerged largely victorious in the Syrian war, but with a pariah status that has blocked the international aid necessary to rebuild his country.

Getting such aid could become even more difficult if Assad and his upper echelons are defendants in prosecutions for war crimes in European courts, even if they consider such proceedings illegitimate. Nor are millions of Syrians who fled to Europe and elsewhere as refugees likely to return home.

Steve Kostas, the senior lawyer of the group that filed the complaints in France, said it focused on the August 2013 events in the city of Douma and the region of Eastern Ghouta, near Damascus — coordinated attacks that the U.S. government said killed more than 1,400 people, making them the world’s deadliest use of chemical weapons in this century.

The victims of those assaults, who inhaled sarin nerve agent or chlorine fumes from bombs, are only a small proportion of the estimated 400,000 people killed since the Syria war began in March 2011.

More than 300 chemical weapons attacks in Syria have been documented by experts, including photographs and videos of adults and children, seized by convulsions, gasping for air and often suffocating.

Many of these images have been publicized and shocked the world. To date, no one has had to answer for them.

“We want the French to conduct an independent investigation and ultimately to issue arrest warrants against those who bear responsibility for these crimes against civilians,’’ said Kostas, a senior lawyer with the Open Society Justice Initiative who is based in London.

‘’We know high-level perpetrators will not be arrested soon,’’ he said.

But cases must be built now, he said, to ensure prosecutions in the future.

The other two groups participating are Syrian Archive, a documentation center in Berlin, and the Syrian Center for Media and Freedom of Expression, based in Paris.

Among the witnesses they can bring, they say, are not only survivors of attacks but also former members of the government who have been linked to the banned chemical arms arsenal or have knowledge of its workings.

The filing comes amid speculation over moves by some countries to seek closer ties with Damascus, an informal recognition that Assad has not been defeated. There has also been talk of planning a reconstruction phase, which would yield important contracts and facilitate the return of refugees.

But Western countries, even those who have taken in significant numbers of refugees, are adamant that impunity for the crimes is not an option for any future peace deal or normalization. Until now, only limited steps have been taken toward holding any senior Syrians accountable.

Russia and China have blocked the road to the International Criminal Court for any prosecution of Syrian atrocities by using their veto in the U.N. Security Council, which could grant ICC jurisdiction.

“After 10 years and all these crimes, there’s no reaction from the international community, so the victims themselves are trying to knock on all doors,” said Mazen Darwish, an activist and former prisoner from Syria who founded the Syrian Center for Media and Freedom of Expression.

“People are dying every day,” he said.

In the absence of any international court that has jurisdiction over Syrian crimes, a patchwork of efforts for accountability has been underway for some time. Several countries, including Germany, Sweden and France, are prosecuting or have already convicted individuals found among Europe’s many Syrian refugees.

They have mostly been low-level members of the Islamic State group or of the Syrian security forces, accused of human rights abuses.

But the complaint filed in Paris, and a similar one filed by the same group in Germany, is aiming for the first time for the top tier of the Syrian government over the chemical weapons issue — both for past attacks and what the complaints call a secretive program that flagrantly flouts international law.

The group’s complaint in Germany was submitted in October before the federal public prosecutor in Karlsruhe. It focuses on the sarin nerve agent attack in Eastern Ghouta in 2013 and in the rebel-held village of Khan Sheikhoun in 2017.

Both France and Germany accept a form of universal jurisdiction, which grants their national courts the power to prosecute individuals accused of heinous offenses committed anywhere.

Kostas said France’s law on responsibility of corporations could also provide the justification to introduce evidence on companies that supplied chemicals and equipment to Syria for its banned chemical weapon arsenal.

The United Nations and the Organization for the Prohibition of Chemical Weapons conducted inquiries after the 2013 attack in Syria, but the evidence they amassed has never led to any accountability and never identified perpetrators by name.

The request for a criminal investigation is based partly on a two-year study of Syria’s chemical weapons program that goes beyond what other international inquires have done, Kostas said. The study relied on a multitude of sources, he said, including defectors, former insiders, employees, engineers and people linked directly or with knowledge of the program.

Gregory Koblentz, an expert in chemical and biological weapons and professor at George Mason University who reviewed the study, said that while there was much open source material, “it brings to light new information from defectors and insiders.”

Koblentz called it the “most comprehensive and detailed account of the Syrian weapons program available perhaps outside the intelligence services. It maps out new details on the chain of command and shows how large and complex this program was. And it can name names.”

The complaint filed in Paris also makes ample use of evidence from the Syria Archive, which has stored more than 3 million videos sent by activists from Syria. It also draws on data from the Global Public Policy Institute, a research group in Berlin.

Tobias Schneider, a researcher at the institute, said it had verified 349 attacks in the past decade, “significantly more than has been commonly known.” The Organization for the Prohibition of Chemical Weapons, by contrast, has studied only 39 attacks because of what the organization has described as limited resources.

Darwish, who spent three years imprisoned in Syria and now lives in Paris, said the fight against chemical weapons was more than just about the attacks in his country.

“If they’re not banished, no place will be safe,” he said. “What’s next? They could be used on the Champs-Élysées.”