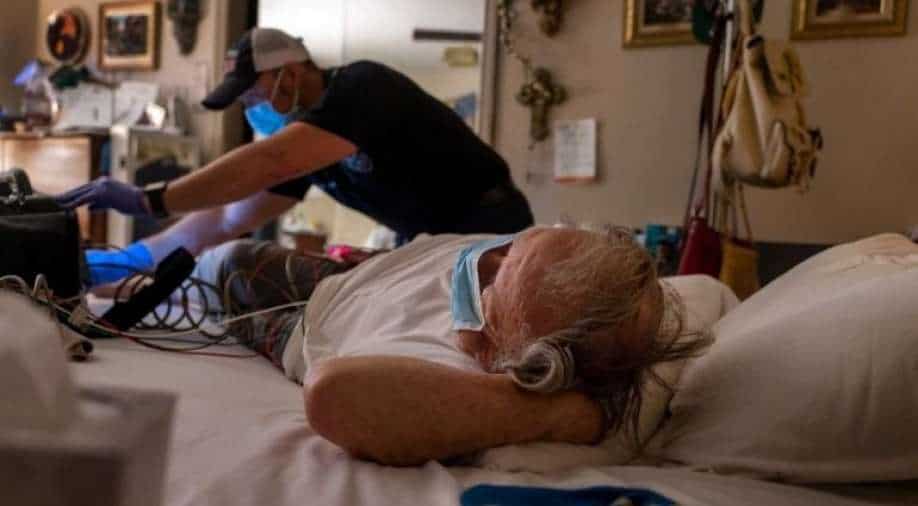 A healthcare personnel with a Covid patient in the United States (representative image). Photograph:( AFP )

As the delta variant has led to spikes in coronavirus cases, the hospitals in the southern states in the US are running dangerously low on space in ICUs. One in four hospitals now report that more than 95% of ICU beds are occupied. It is becoming difficult to maintain standards of care for the sickest patients in hospitals

Hospitals in the southern United States are running dangerously low on space in intensive care units, as the delta variant has led to spikes in coronavirus cases not seen since last year’s deadly winter wave.

One in four hospitals now reports more than 95% of ICU beds occupied — up from 1 in 5 last month. Experts say it can become difficult to maintain standards of care for the sickest patients in hospitals where all or nearly all ICU beds are occupied.

In June, when COVID-19 cases were at their lowest level, less than 1 in 10 hospitals had dangerously high occupancy rates.

In Alabama, all ICU beds are currently occupied. In recent days, dozens of patients in the state have needed beds that were not available, according to data published by the Department of Health and Human Services.

“It means they’re in the waiting room, some are in the back of ambulances, things of that nature,” said Jeannie Gaines, a spokesperson for the Alabama Hospital Association.

In Texas, 169 hospitals have ICUs that are more than 95% full, up from 69 in June. There are only about 700 intensive care beds remaining across the entire state, according to recent data.

Hospitals in Houston constructed overflow tents last month to handle the influx of patients, and the rate of hospitalizations in the state is now 40% higher than when the tents were built.

During past surges, hospitals have been forced to improvise by having staff care for more patients than usual or by setting up temporary intensive care beds in other wings of the hospital.

Patients with critical conditions besides COVID, like heart attacks or strokes, can also have worse health outcomes when most beds are full.

Unvaccinated Americans are 10 times more likely to be hospitalized with COVID than the vaccinated, according to a recent study by the Centers for Disease Control and Prevention. Several of the states with the highest rates of ICU occupancy, including Alabama and Mississippi, are also among those with the lowest vaccination rates.

“Our biggest concerns are our low vaccination rates,” said Dr. Scott Harris, Alabama’s state health officer. “That’s the reason we’re in the situation that we’re in. Virtually all of our deaths are people who are unvaccinated.”

Hospitalizations among children under 18 are also higher than ever during this wave of the virus, driven largely by surges among children in the least vaccinated states.