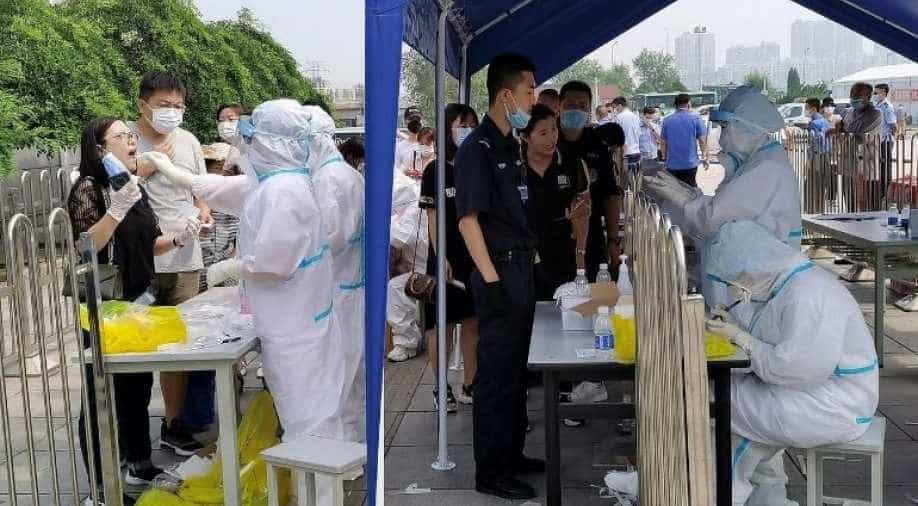 People line up at a testing site where medical workers in protective suits collect swabs for nucleic acid tests, after new cases of coronavirus disease in China Photograph:( Reuters )

Far from slowing down, the latest figures show that the rate of infection is accelerating.

The number of people infected with the novel coronavirus has reached 18,469,834 globally while the death toll nears 700,000.

Far from slowing down, the latest figures show that the rate of infection is accelerating.

The US on Tuesday added 1,302 deaths from COVID-19 in the past 24 hours, according to a tally by Johns Hopkins University.

Australia's second most populous state of Victoria on Wednesday reported its deadliest day of the coronavirus outbreak with 15 fatalities in the last 24 hours and a record daily rise in infections.

The state reported 725 new cases compared with 439 a day earlier. It recorded its previous one-day high of 723 cases and 13 deaths last week.

Brazil is driving a surge in Latin America and the Caribbean, where infections passed five million on Monday.

Latin America surpassed Europe on Tuesday to become the region with the highest coronavirus death toll worldwide, according to a Reuters tally.

The region has now recorded more than 206,000 deaths, approximately 30 per cent of the global total.

France and the Netherlands are gearing up for stricter mask-wearing rules to fight the coronavirus. Paris, Toulouse and other cities announced that the wearing of masks would be compulsory in particularly busy streets and squares. People already have to wear them inside most private businesses and all public buildings.

Millions of people in the Philippines were ordered to stay home Tuesday in a bid to contain the rising rate of infections, and relieve pressure on overwhelmed hospitals.