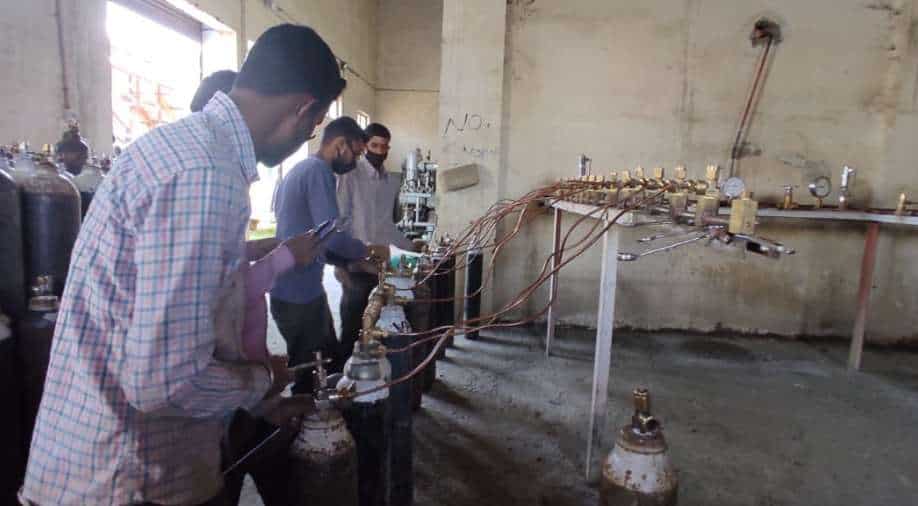 This facility has been thrown open today and will be refilling 700 cylinders a day. Photograph:(WION)
Follow Us

In Sri Lanka, the demand for oxygen has risen seven times. In Pakistan, oxygen vendors have doubled their prices over the last month

In India, people battled to breathe as oxygen demand shot up with the sudden surge in COVID-19 cases.

Last year, it had happened in the United States and Europe, and now, it is happening in many more countries that have been recording high death rates due to oxygen shortage.

The list has been put together by the Bureau of Investigative Journalism. It says that the situation in these countries has been exacerbated because of low vaccination rates.

In Nepal, the demand for oxygen has risen 100 times between March and May, and climbers have been asked to bring back their empty oxygen tanks from Mount Everest so that they could be refilled and used in hospitals.

In Sri Lanka, the demand for oxygen has risen seven times. In Pakistan, oxygen vendors have doubled their prices over the last month.

The crisis goes beyond South Asia. In Laos, there has been a 200-fold increase in demand for oxygen.

According to the Bureau of Investigative Journalism, there are at least 30 countries that currently need twice as much oxygen as they did in March. This list includes Fiji, Vietnam, Afghanistan, Cambodia, Mongolia, Angola and Kyrgyzstan.

Medical oxygen makes up for just 1 per cent of global liquid oxygen production. The remaining 99 per cent is used in industries for mining, petrochemicals, aeronautics and water treatment.

Over the last few months, countries have asked oxygen companies to divert their supplies to hospitals. Even if more countries follow suit, the ones most in need will still not have enough oxygen to cater to the needs of the hospitals.

Iraq's gas company, for example, can produce only a third of what the country's Covid patients need. In Colombia, it is less than 2/3rd and Peru only 80 per cent.

More countries are staring at a repeat of what happened in India - a sudden surge in cases, made worse by crippling shortages. In fact, something very similar is already playing out in Japan.

Osaka, Japan's second-largest city which is home to 9 million people, which is nearly 7 per cent of Japan's population, has a third of the country's Covid deaths. The Wuhan virus has spread rapidly in the city and there is a huge wave of new infections: nearly 4,000 every day. The young and the elderly are falling sick, with Osaka crumbling under the rising cases. The city's healthcare system has collapsed.

"Simply put, this is the collapse of the medical system. we cannot take in (patients)," Yuji Tohda, director at Kindai university hospital, said.

Osaka is running out of beds and ventilators with doctors burnt out. While the pressure on hospitals is high, the rate of hospitalisation is extremely low in Osaka, with just 14 per cent patients hospitalised.

The rest are all fending for themselves at home. In the capital city of Tokyo, the hospitalisation rate is 37 per cent. Rates lower than 25 per cent are grounds for imposing an emergency in Japan.

Commercial activities have already been restricted in Osaka, with emergency declared in eight other regions. The news has spread to countries on the other side of the globe. The United States has warned against travelling to Japan.

The new wave of infections in Japan comes months before the Tokyo Olympics, and those at the frontline are warning against holding the games.

At least 90,000 people are expected to arrive in Japan for the Olympics. Is this a disaster in the making?