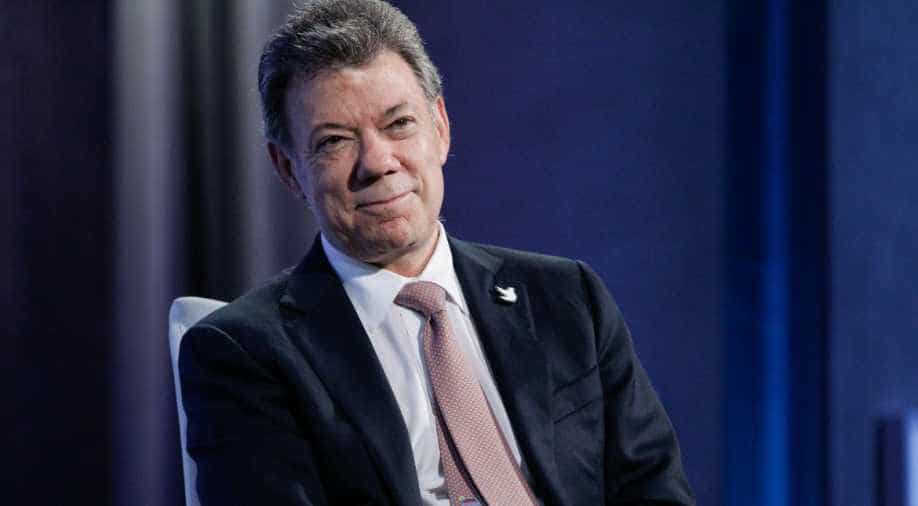 "Today we can say the war has officially ended," Santos said in a speech. "We all have to continue making sacrifices, but I hope we will do so together." Photograph:( Getty )

After pushing a revised peace deal with the FARC rebels through Congress, Colombian President Juan Manuel Santos got down to a far bigger challenge on Thursday: implementing it.

The lower house's unanimous vote in favour of the deal set off a countdown to end a conflict that has burned for over half a century and killed more than 260,000 people. "Today we can say the war has officially ended," Santos said in a speech. "We all have to continue making sacrifices, but I hope we will do so together."

Interior minister Juan Fernando Cristo told a news conference that Colombia now faces "an enormous challenge" to implement the accord.

Within five days, the Revolutionary Armed Forces of Colombia, or FARC, must begin demobilising and surrendering their weapons. Under the deal, the process must be complete within six months. The FARC will relaunch as a political party.

The next step, Cristo said, would be to present Congress with an amnesty for FARC members, the most contested part of the accord.

Santos, who won this year's Nobel Peace Prize, said "D-Day begins" on Thursday. The delicate transition to peace will take place amid bitter opposition to the deal, which Santos's rivals say is too soft on the leftist guerrillas.

Voters rejected an earlier version of the deal in a referendum last month. That sent peace negotiators back to the drawing board after nearly four years of talks.

Rather than risk a second referendum, the government and rebels decided to have the revised deal ratified in Congress. Opponents say the new version includes only token changes.

The deal passed unanimously in both houses of Congress, where Santos has a majority. His top opponent, former president Alvaro Uribe, led a walkout by his right-wing party, the Democratic Center.

"How is the Congress going to approve what the Colombian people rejected?" Oscar Ivan Zuloaga, a former presidential candidate for Uribe's party, said during the House debate.

Uribe and his allies argue the deal grants impunity to rebels guilty of war crimes, giving them seats in Congress rather than sending them to jail.

The biggest bone of contention is an agreement for non-custodial sentences for FARC members who admit to their crimes. Under the deal, rebel leaders will be able to hold public office while still serving their sentences.

Lawmakers must now approve a series of bills to implement the peace accord, beginning with the amnesty for the guerrillas.

"A first set of pardons is currently being prepared," government peace delegate Sergio Jaramillo told the news conference. "Meanwhile, an amnesty law will be submitted to the legislative process."

A ceasefire has been in effect since August, shaken by violence in recent weeks. Two guerrillas died in what the authorities described as a clash with the army. A wave of assassinations and attacks has also targeted community leaders in conflict areas.

The FARC's 5,700 fighters are to gather in disarmament zones, laying down their weapons under UN supervision.

"If that process goes well and without problems, it could change the political balance of power created by the plebiscite and the opposition's rejection of the accord," said Kyle Johnson, an analyst with the International Crisis Group.

But there are still "challenges related not only to the politics but to the implementation on the ground," he added.

US Secretary of State John Kerry welcomed the accord in a statement urging its critics "to continue their principled commitment to peace in the coming implementation phase."

United Nations and the European Union officials also hailed the deal. The conflict has drawn in various guerrilla forces, right-wing paramilitaries and drug gangs over the years.

The government is still seeking to salvage talks with a smaller rebel group, the National Liberation Army (ELN). Talks were suspended last month before they started when the rebels failed to release a hostage.