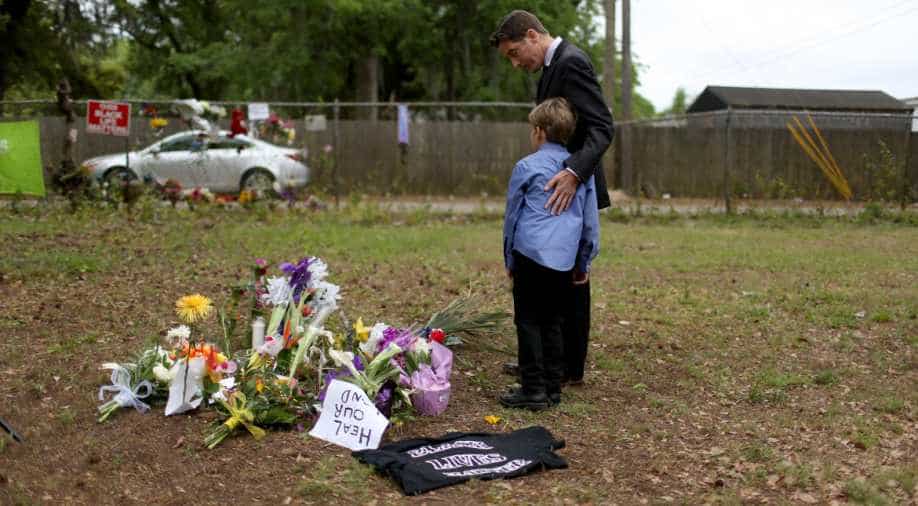 Rev Jeremy Rutledge and his son look at a memorial built on the site where Walter Scott was killed by a North Charleston police officer, April 12, 2015 in North Charleston, South Carolina. Photograph:( Getty )

Defense attorneys urged a South Carolina jury on Wednesday (November 30) to look beyond a shocking video of a white police officer shooting a fleeing black motorist to death last year and consider all the evidence presented at the former policeman's murder trial.

Lawyers were making their closing arguments to jurors who will decide whether Michael Slager, 35, committed a crime when he killed 50-year-old Walter Scott in North Charleston.

Slager testified on Tuesday that he was afraid when he shot Scott, who state prosecutors said fled a traffic stop because he was behind on child-support payments and feared he might be arrested.

Attorney Andy Savage told the jury of 11 white people and one black person to consider not just the video, captured by a bystander and viewed by millions of Americans, but all the evidence presented since testimony began earlier this month.

"Setting the false narrative aside, let's look at the truth," he told jurors in a Charleston courtroom.

Earlier on Wednesday, the jury visited the empty lot in North Charleston where the shooting occurred, taking in a final bit of evidence in a case that intensified national debate about racial bias in law enforcement. The April 4, 2015, incident began when Slager stopped Scott's car for a broken brake light, and Scott fled. Slager chased the man, first firing a Taser stun gun at him and then drawing his firearm after a tussle.

Savage said Slager shot him "in fear of his life", noting that the officer did not know at the time that Scott was unarmed.

He said the video transformed Slager into a national symbol for a wave of controversial police killings of black men in cities including New York, Baltimore and Ferguson, Missouri. Slager was fired, arrested and charged with murder.

Solicitor Scarlett Wilson told jurors that they had to find Slager acted with malice to convict him of murder.

"It can be meanness. It can be ill will. It can be just a plain and reckless indifference to human life - like eight shots in the back," she said.

Prosecutors contend Slager did not appear to be in danger when he hit Scott with five of those shots. The jury could also weigh a lesser charge of voluntary manslaughter for Slager, who faces a maximum of life in prison if convicted of murder.