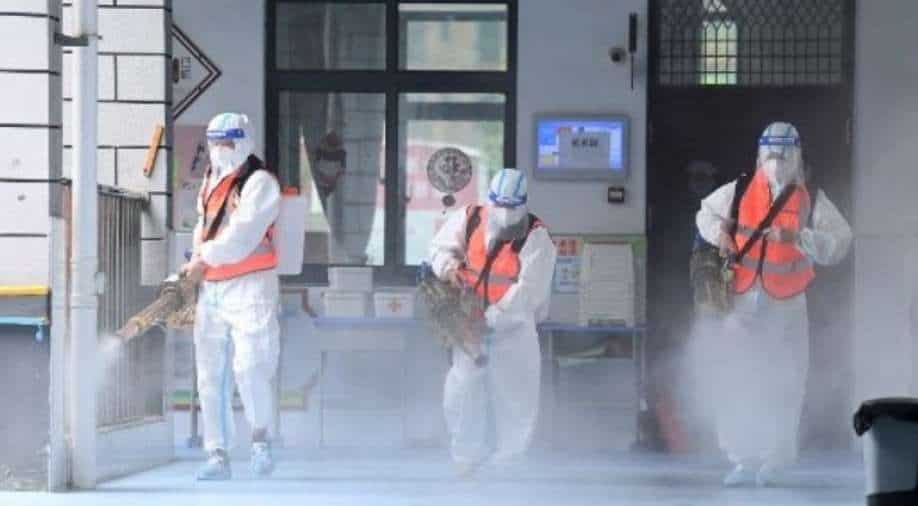 This photo taken on August 25, 2021 shows staff members spraying disinfectant at a primary school ahead of the new semester in Wuhan, in China's central Hubei province. Photograph:( AFP )

Purchases of PCR tests in Hubei province surged months before the country notified international authorities of the first COVID-19 case in December 2019, according to a report. Over $10 million was spent on PCR tests in Hubei in 2019, nearly double the total in 2018, an Australia-based cybersecurity company found. China's foreign ministry has disputed the report's findings.

Research conducted by a cybersecurity firm has revealed that the Chinese province that was the initial epicentre of the COVID-19 outbreak made significant purchases of equipment used to test for infectious diseases months before Beijing notified international authorities of the emergence of a new coronavirus.

According to the Australian-American firm Internet 2.0, the province's purchase of polymerase chain reaction, or PCR, testing equipment, which allows scientists to amplify DNA samples to screen for infectious illness or other genetic material, increased dramatically in 2019.

Wuhan, a big Chinese city where the first known instances of the virus arose, is located in Hubei province.

On December 31, 2019, the World Health Organization's China Country Office received notification that instances of pneumonia from an unknown source had been discovered in the city.

Watch | Gravitas: Chinese officials were buying PCR tests in May 2019

On January 7, 2020, Chinese officials discovered a new strain of coronavirus known as SARS-CoV-2, which causes the sickness now known as COVID-19.

Also read | Is the coronavirus getting better at airborne transmission?

Since then, it has spread to nearly every corner of the globe, infecting more than 230 million people and killing over 4.8 million.

The origins of the coronavirus have become a contentious topic, with the United States and its allies accusing Beijing of blocking a more complete probe, including claims that the virus escaped from a Wuhan biosecurity facility where similar coronaviruses were being investigated.

In August, US intelligence authorities issued a summary of their study into the outbreak's causes, but stated that they were unable to draw strong findings due to China's refusal to assist.

Chinese officials have denied interfering with the investigation and have fiercely refuted the Wuhan lab leak hypothesis.

Top Chinese scientists have stated that the disease most likely originated in an animal and was transferred to humans via an intermediate host, a view that has been widely accepted by the scientific world.