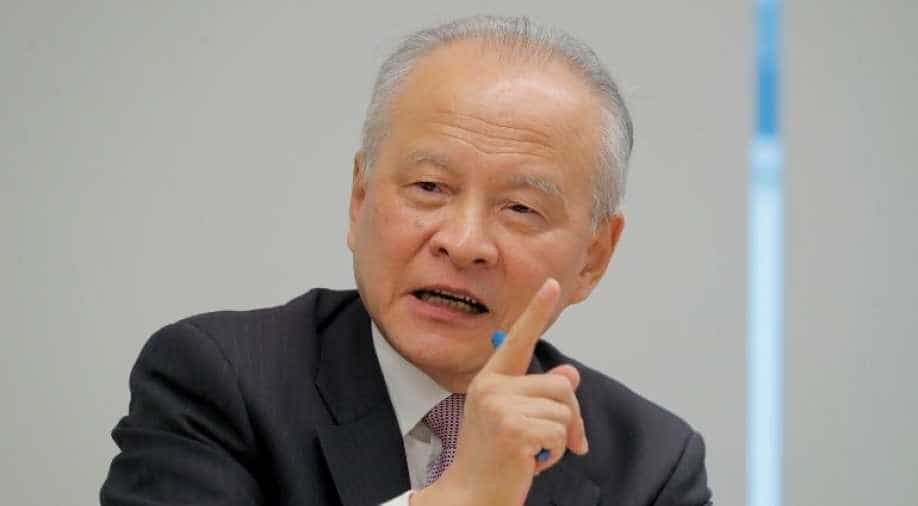 China's envoy to the United States on Wednesday said the two countries were trying to resolve their differences over trade, but he warned of forces that he said were trying to drive a wedge between the two, without providing any details.

Ambassador Cui Tiankai, speaking at a dinner hosted by the US-China Business Council, said US-Chinese ties were at a critical crossroads due to trade frictions, but it was possible to return to a better path.

"At the same time, we must be alert that some destructive forces are taking advantage of the ongoing trade friction (through) extreme rhetoric such as 'decoupling,' the 'new Cold War,' and ‘clash of civilisations,'" Cui said.

He urged US and Chinese companies keen to expand trade between the two countries to stand up against what he called efforts to "spread hostility and even create conflict between us," as well as "fake news" about the situations in both Hong Kong and Xinjiang, China's troubled western region that is home to a large Uighur Muslim minority, whom some US officials have said are the victims of human rights abuses.

Cui's comments came a day after US President Donald Trump said a long-awaited interim trade agreement with China could be delayed until after the US presidential election in November 2020, and amid US legislative moves to address the Uighur issue.

The United States and China have been locked in a bitter trade war for 17 months, with the US government cracking down against a broad range of what it sees as efforts by the Chinese government to steal US technology and dominate global markets.

Anti-government demonstrations in Hong Kong and Beijing's treatment of its Uighur Muslim minority have also fanned longstanding human rights concerns. Beijing views US actions on both issues as interference in its sovereign concerns.

The Democratic-led US House of Representatives voted nearly unanimously on Tuesday for a bill that would require the Trump administration to toughen its response to China's crackdown on the Uighurs. China warned earlier on Wednesday that the US legislation will affect bilateral cooperation, clouding prospects for a near-term deal to end a trade war.

Cui did not echo those remarks directly but said reports about both the situation in Hong Kong and Xinjiang had been seriously distorted. "Facts are facts no matter how much fake news is generated," he said.

He did not address the US-Chinese trade talks specifically but said Beijing remained committed to expanding bilateral trade and investment between the two countries.