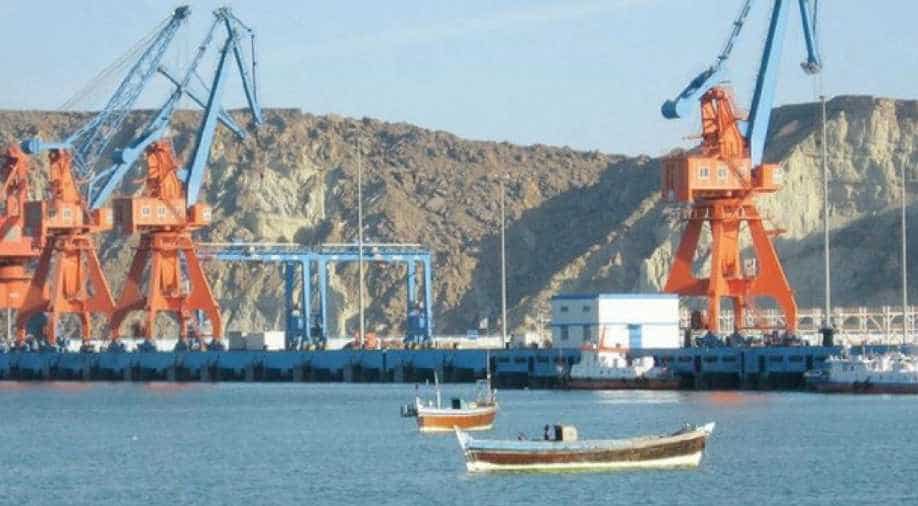 China is setting up its port project at Gwadar (Pakistan). Photograph:(Others)
Follow Us

The study has identified at least 16 countries all over the world that owe China large sums of money including Cambodia, Papua New Guinea, Malaysia and several others.

China is engaging in "cheque book diplomacy", meaning Beijing is advancing loans to countries that are unable to repay loans, researchers at Harvard University have said.

As a result of huge debt piling up, countries are ending up handing over land, ports and even airports to Chinese firms on long-term lease which finally end up serving China's ever-expanding strategic and military ambitions, Harvard researchers have said in a report.

The study has identified at least 16 countries all over the world that owe China large sums of money including Cambodia, Papua New Guinea, Malaysia and several others.

Significantly, India's neighbours Pakistan and Sri Lanka top the list. Beijing is committed to investing $62 billion in infrastructure project in Pakistan under the China–Pakistan Economic Corridor(CPEC) project.  It has handed over the Gwadar port to China and also ceded land for a naval base nearby

The question on the minds of most Pakistan experts is how will Islamabad pay back China all the money, along with interest. Pakistan already owes China $19 billion for loans taken on various accounts including day-to-day spending. It has already handed over the Gwadar port to China.

Sri Lanka owes China $8 billion for loans forwarded by Beijing for various infrastructure projects. Like Pakistan, it has already handed over the Hambantota port on a 99-year long lease and Chinese ships have already started docking there during voyages from bases in the South China Sea.

In the far east, China invested $7 billion in Cambodia last December alone and with loans taken over the last two decades Cambodia is indebted to China to the tune of 60 per cent.

The dependence has seen Cambodia scrap the Angkor sentinel military exercise with the US and ties with Taiwan, Harvard researchers revealed.

Also, China has ensured Loas debt burden to rack up to 65 per cent which has resulted in vast tracts of agricultural land being taken over by Chinese migrants, the study said. China is also funding a new $6.7 billion railway line and it is not clear what China will demand if the Loas government is unable to repay the debt.

Elsewhere in Papua New Guinea near Australia, the government may have to surrender control over some of its reserves of oil, gold, copper and coffee, the study found. China is already a majority-owner in nickel mine and is funding construction of roads, ports and high-speed Intenet in the country.

This has meant Papua New Guinea's debt to China has risen from less than $ 3 million in five years to over $20 million today.

Malaysia which was earlier a staunch critic of China has toned down its rhetoric of China's muscle-flexing in the South China Sea after Beijing invested more than $2 billion in the country's state development fund. On the other hand, Philippines saw its banana exports being hit after it criticised China over its intervention in the South China Sea.

As part of the renewed push towards 'debt book diplomacy', Vanuatu located in the south pacific ocean, owes China half of its debts with reports suggesting Beijing may get a naval base there, the study said.

For the US, its strategic hold over the Marshalls islands and Palau in the Pacific could end as China muscles its way through  "cheque book diplomacy".