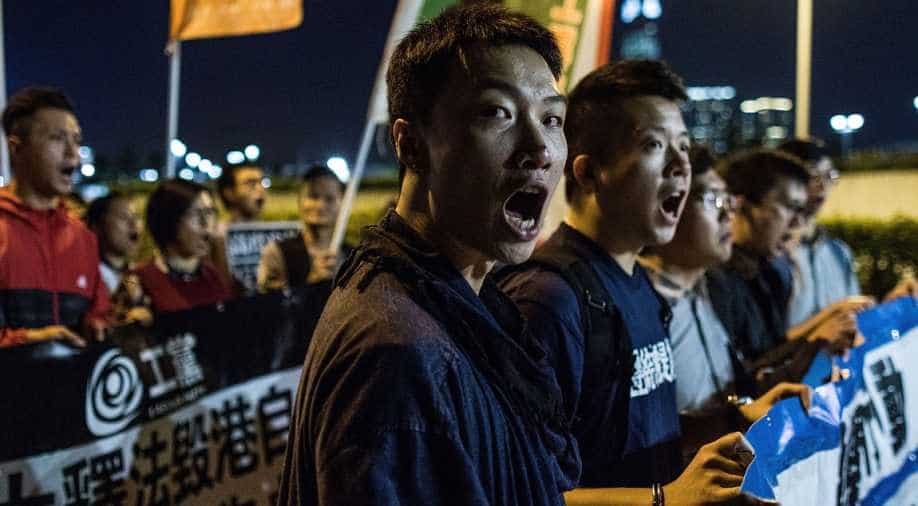 People take part of the pro-democracy march at Central on November 2, 2016 in Hong Kong. Photograph:( Getty )

There is no space for Hong Kong independence in the "one country, two systems" agreement under which Beijing governs the former British colony, but there can be tolerance for differences in their systems, a senior Chinese official said.

Chinese leaders are increasingly concerned about a fledgling independence movement in Hong Kong, which returned to mainland rule in 1997 with a promise of autonomy known as "one country, two systems", and recent protests in the city.

The head of China's Hong Kong Macau Affairs Office, Wang Guangya, told pro-Beijing Hong Kong magazine The Bauhinia that "under 'one country, two systems' there is absolutely no space for 'Hong Kong independence'", in comments carried in the ruling Communist Party's People's Daily on Saturday.

"Hong Kong is an inseparable part of the country, and in no situation is 'Hong Kong independence' allowed. This is a bottom line that cannot be touched in 'one country, two systems'," Wang said.

As "one country, two systems" is new, it has no ready-made experience to draw from, and it's normal that in this process "new situations, new problems and new challenges" will arise, he added.

"You can't expect it to be all plain sailing," Wang said. "The central government has confidence in and patience with Hong Kong. As long as the 'one country' principle is not damaged, the differences in the two systems' absolutely can be tolerated and respected," he added.

In separate comments from the same interview reported by the official Xinhua news agency late Friday, Wang said the interpretation did not harm the independence of Hong Kong's legal system, but that independence could not limit the Chinese parliament's ability to interpret the Basic Law.

Hong Kong returned to China under the "one country, two systems" agreement that ensured its freedoms and wide-ranging autonomy, including a separate legal system.

But Communist Party rulers in Beijing have ultimate control, and some Hong Kong people are concerned they are increasingly interfering to head off dissent.