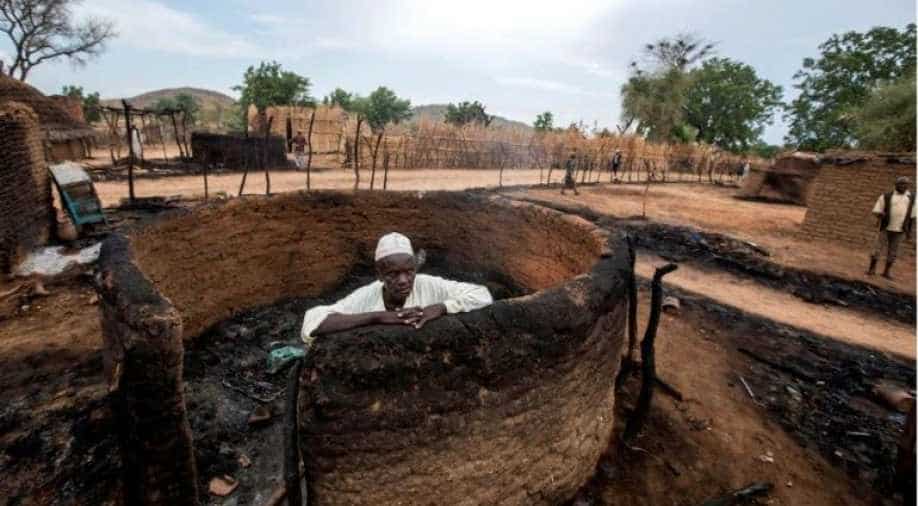 A man is seen inside a burnt house during clashes between nomads and residents in Deleij village, located in Wadi Salih locality, Central Darfur, Sudan June 11, 2019. Photograph:( Reuters )

More than 300,000 people have been killed and 2.5 million displaced in the violence, according to the United Nations.

China and Russia on Friday rejected calls from European and African countries to freeze the planned shutdown of a peacekeeping mission to Sudan's Darfur region.

Britain, France, Germany and the African countries on the Security Council told the group that the decision on closing the joint UN-African Union mission should be put on hold while Sudan is engulfed in crisis.

The council is scheduled to vote on the mandate of the mission, known as UNAMID, on June 27.

Also read: Arab springs: The game may not be all over yet

"The situation has evolved, the situation is not the same in the centre, and we cannot proceed as if nothing has happened," said South Africa's Ambassador Jerry Matjila.

Russia and China, however, said the drawdown must continue as planned with a view to end operations in 2020.

"The Sudanese government has the capacity to maintain peace and security in Darfur on its own," said China's Deputy Ambassador Wu Haitao.

China, Sudan's major trading partner, has long supported Khartoum's view that the conflict in Darfur was winding down and that peacekeepers were no longer needed.

After a series of phased drawdowns, about 7,200 troops and police remain in Darfur from the 16,000 deployed at the height of the conflict.

More than 300,000 people have been killed and 2.5 million displaced in the violence, according to the United Nations.

Russian Deputy Ambassador Dmitry Polyanskiy said the council was right to pull out peacekeepers and warned against any "outside lecturing" to Khartoum.

Sudan has been led by a military council since generals ousted Omar al-Bashir on April 11 after months of nationwide protests against his three-decade rule.

Protesters remained encamped outside the military headquarters in Khartoum for weeks afterwards demanding civilian rule, until a June 3 crackdown that left scores dead.

Amnesty International and Human Rights Watch have said the instability has an impact on Darfur and that peacekeepers should remain.

UN human rights official Andrew Gilmour said there have been increased reports of killings, abduction and sexual violence in Darfur in recent months.

Over the past two months, 47 people have been killed in Darfur, he said.

Sudan's military rulers have issued a decree ordering UNAMID to hand over all of its camps in Darfur to the Rapid Support Forces, which led the crackdown on protesters.

But UN peacekeeping chief Jean-Pierre Lacroix said plans to turn over the camps to Sudanese forces as part of the drawdown have been suspended.