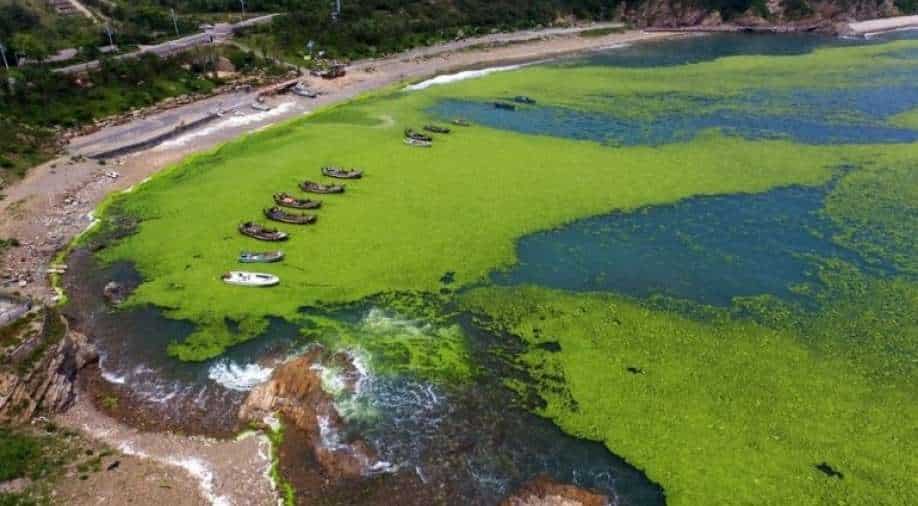 This photo taken on July 11, 2019 shows boats surrounded by algae in a bay in Qingdao, China's eastern Shandong province. The bright green algae bloom is an annual phenomenon along the Shandong coastline since the first outbreak in 2008, and is believed t Photograph:( AFP )

Chinese media reported Thursday that the algae outbreak has spread over around 9,290 square kilometers

China has deployed thousands of boats and powered scoops to deal with a massive algae bloom that is threatening sea life, tourism, and water transport.

Climate change and pollution are thought to have contributed to the proliferation of the organic matter which contains a wide variety of micro-organisms and can flourish when nutrient-rich sewage flows into seawater.

Dozens of sea surface-cleaning and barrier-laying boats, as well as several other vessels, have been working to prevent the spread of the mucilage.

The thick layer of plants that has coated waters and clogged beaches in the Chinese port city of Qingdao. Such blooms can displace critical food sources for ocean animals while giving off a strong smell.

The bright green algae bloom is an annual phenomenon along the Shandong coastline since the first outbreak in 2008, and is believed to be caused by a combination of warming sea temperatures, and edible seaweed farming off the coast.

State media reported Thursday that the outbreak has spread over around 9,290 square kilometers (3,600 square miles).

The thick, slimy layer of so-called "sea snot" is spreading in Turkey's Sea of Marmara to the south of Istanbul, at alarming levels, posing a growing threat to marine life and the fishing industry. Some has sunk below the waves, suffocating seabed life.

Algae blooms have started appearing more widely, with outbreaks seen from California to the Suez Canal.