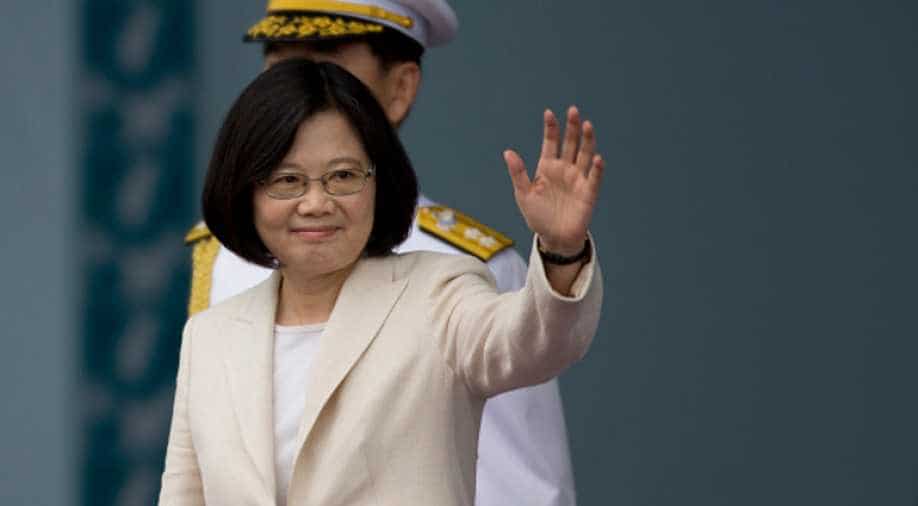 "This is just the Taiwan side engaging in a petty action, and cannot change the 'one China' structure already formed by the international community," Chinese foreign minister Wang Yi said at an academic forum in Beijing, state media reported. Photograph:( Getty )

US President-elect Donald Trump spoke by phone with President Tsai Ing-wen of Taiwan, the first such contact between the two sides in nearly four decades, but China dismissed the call as a "petty action" by the self-ruled island it claims as its own.

The 10-minute telephone call with Taiwan's leadership was the first by a US president-elect or president since President Jimmy Carter switched diplomatic recognition from Taiwan to China in 1979, acknowledging Taiwan as part of "one China".

Hours after Friday's call, Chinese foreign minister Wang Yi blamed Taiwan for the exchange, avoiding what could have been a major rift with Washington just before Trump assumes the presidency.

"This is just the Taiwan side engaging in a petty action, and cannot change the 'one China' structure already formed by the international community," Wang said at an academic forum in Beijing, state media reported.

"I believe that it won't change the longstanding 'one China' policy of the United States government."

In comments at the same forum, Wang noted how quickly President Xi Jinping and Trump had spoken by telephone after Trump's victory, and that Trump had praised China as a great country.

Wang said the exchange sent "a very positive signal about the future development of Sino-US relations", according to the Chinese Foreign Ministry's website. Taiwan was not mentioned in that call, according to an official Chinese transcript.

Trump said on Twitter that Tsai had initiated the call he had with the Taiwan president. "The President of Taiwan CALLED ME today to wish me congratulations on winning the Presidency. Thank you!" he said.

Alex Huang, a spokesman for Tsai, said: "Of course both sides agreed ahead of time before making contact."

"We call on China to face the new situation in the Asia-Pacific region and work with us towards developing a benign cross-strait relationship," the Mainland Affairs Council said in a statement, referring to the stretch of water between the two sides.

China considers Taiwan a wayward province and has never renounced the use of force to bring it under its control. Relations between the two sides have worsened since Tsai, who heads the pro-independence Democratic Progressive Party, was elected president in January.

China's influential state-run tabloid the Global Times said in an online editorial that if Trump really overturned the "one China" principle upon assuming office it would create such a crisis with China he'd have little time to do anything else.

"We believe this is not something the shrewd Trump wants to do."

Washington remains Taiwan's most important political ally and sole arms supplier, despite the lack of formal diplomatic ties, the irony of which was not lost on Trump.

"Interesting how the US sells Taiwan billions of dollars of military equipment but I should not accept a congratulatory call," Trump said in another tweet.

Trump has eschewed tradition in other calls with foreign leaders since he won the US election, prompting the White House to encourage him to make use of the diplomatic expertise and counsel of the State Department.

The White House said after Trump's call that "longstanding policy" on China and Taiwan had not changed.

"We remain firmly committed to our 'one China' policy," said Ned Price, a national security spokesman for President Barack Obama. "Our fundamental interest is in peaceful and stable cross-Strait relations."

Trump adviser Kellyanne Conway said on CNN that Trump was "well aware of what US policy has been" on Taiwan.

Administration officials said Trump's team did not alert the White House about the call ahead of time.

Advisers to the Republican president-elect have indicated that he is likely to take a more robust policy towards China than Obama, a Democrat, and that Trump plans to boost the US military in part in response to China's increasing power in Asia. However, details of his plans remain scant.

Trump lambasted China throughout the US election campaign, drumming up headlines with pledges to slap 45 percent tariffs on imported Chinese goods and label the country a currency manipulator on his first day in office.

Earlier this week, Trump spoke to Pakistani Prime Minister Nawaz Sharif and praised him, according to the Pakistani leader's office, as a "terrific guy".

Islamabad and Washington have seen relations sour in recent years over US accusations that Pakistan shelters Islamist militants who kill U.S. soldiers in Afghanistan, a charge denied by the South Asian nation.

Trump also invited Philippine leader Rodrigo Duterte to the White House next year during what a Duterte aide said was a "very engaging, animated" phone conversation. Duterte has openly insulted Obama, who cancelled a planned meeting with him in September.

A statement issued by Trump's transition team made no mention of the invitation.