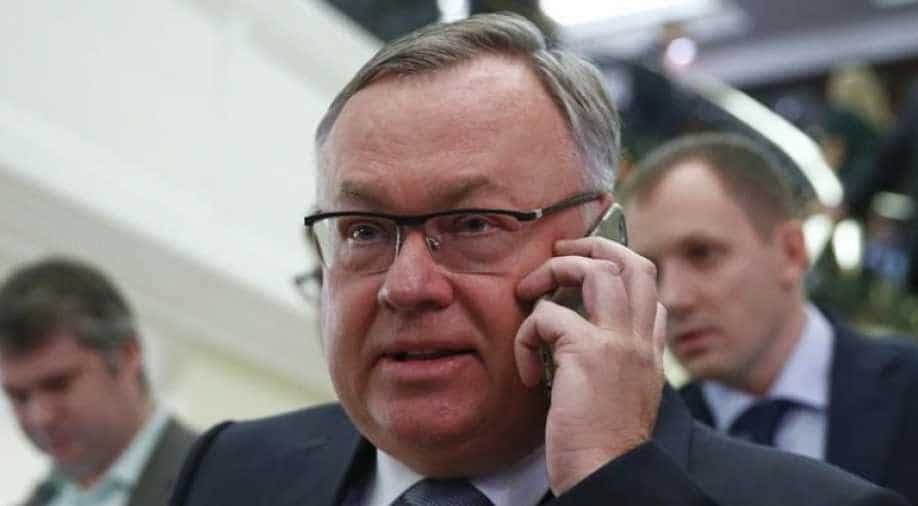 Andrei Kostin, who heads the VTB bank included into the Western sanction list in 2014, was speaking at the ongoing World Economic Forum in Davos. Photograph:( Reuters )

At the World Economic Forum in Davos on Thursday, the chief executive of Russia's second-largest Russian bank, VTB, called for US President-elect Donald Trump to scrap penalties against Russian banks when considering lifting other sanctions against Moscow.

Obama's administration and other European countries had imposed sanctions against Russian businesses, officials and individuals after Russia's annexation of Crimea in 2014.

The Russian banker's request to Trump comes as 17 US Intelligence agencies all agree that Russia interfered with the US election to benefit trump in a multifaceted cyber attack, including the spread of misinformation, fake news, and hacking the Democrats.

Trump has denied claims of his ties with the Kremlin.

In his final news conference at the White House on January 18, Obama advised Trump to keep the issue of economic sanctions on Russia separate from talks to reduce nuclear stockpiles. "Russia continues to occupy Ukrainian territory and meddle in Ukrainian affairs," Obama told reporters.

"I think it would probably best serve, not only American interests, but also the interests of preserving international norms if we made sure that we don't confuse why these sanctions have been imposed with a whole set of other issues," he said.

Obama also said that while it was in the world's interest for US and Russia to have a "constructive relationship", Russia's return to an "adversarial spirit" under President Vladimir Putin made that difficult. Obama said the reason the sanctions were imposed was not because of nuclear weapons but because the independence and sovereignty of a country, Ukraine, had been encroached upon by force by Russia.

In an interview with the Times of London published on Monday Trump said he would bargain with Moscow over ending sanctions on Russia in return for a nuclear arms reduction deal.

Obama had also clarified that the US negotiated the Strategic Arms Reduction Treaty (START) with Russia in his first term and that both countries "substantially reduced our nuclear stockpiles", but further progress was stalled because Putin was unwilling to negotiate.