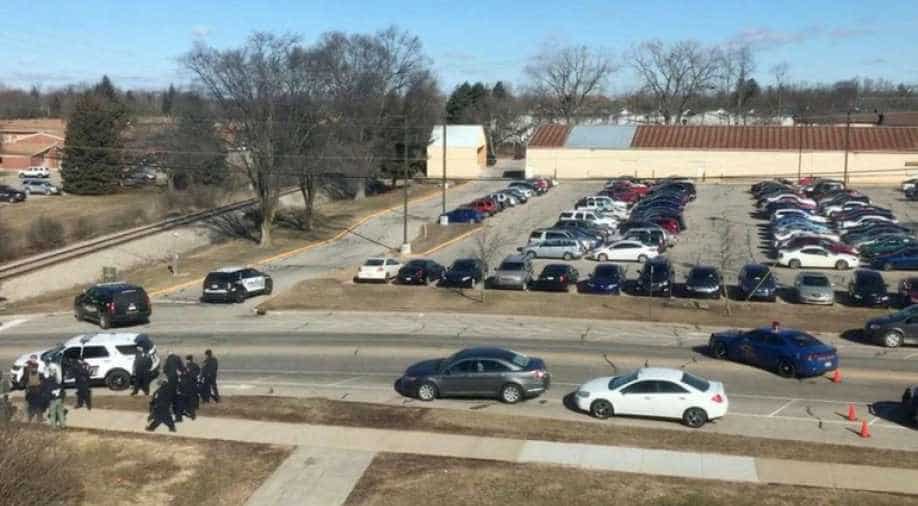 The site of shooting at Central Michigan University Photograph:( Reuters )

A student at Central Michigan University suspected of shooting to death his parents inside a campus dormitory during a domestic dispute was arrested on Saturday, the school said, after a daylong manhunt.

The episode had put the Central Michigan University campus into lockdown Friday morning -- trapping students in classrooms and dormitories until mid-afternoon -- while police conducted an expansive search for the 19-year-old suspected gunman.

19-year-old James Eric Davis Jr, described as a university student, was turned in by "an individual on a train passing through the north end of campus shortly after midnight", university officials said. Officers arrested him without incident.

The suspect is accused of killing his father, mother and a police officer in a shooting inside a dormitory building in what a university police spokesman described as a "family-type domestic issue."

There were no other casualties.

The shooting occurred around 8:30 am at Campbell Hall, a residence hall at Central Michigan, which is about 70 miles north of Lansing. Lt. Larry Klaus of the campus police department described the shooting as a “family-type domestic situation.”

The suspect ran from the scene following the shooting, according to authorities.

Surveillance cameras showed Davis leaving the dorm and heading north along train tracks. Pieces of clothing were found along the tracks. The Davises were reportedly picking up their son from his college campus for spring break when the shooting happened.

Davis had been taken to a local hospital on Thursday night after an apparent overdose or "bad reaction to drugs," Klaus told reporters.

Police in patrol cars and helicopters searched for the gunman around an area of apartments north of the campus, according to video posted online by reporters on the scene.

Central Michigan University is a four-year, public institution with over 23,000 students enrolled, according to the college`s website.