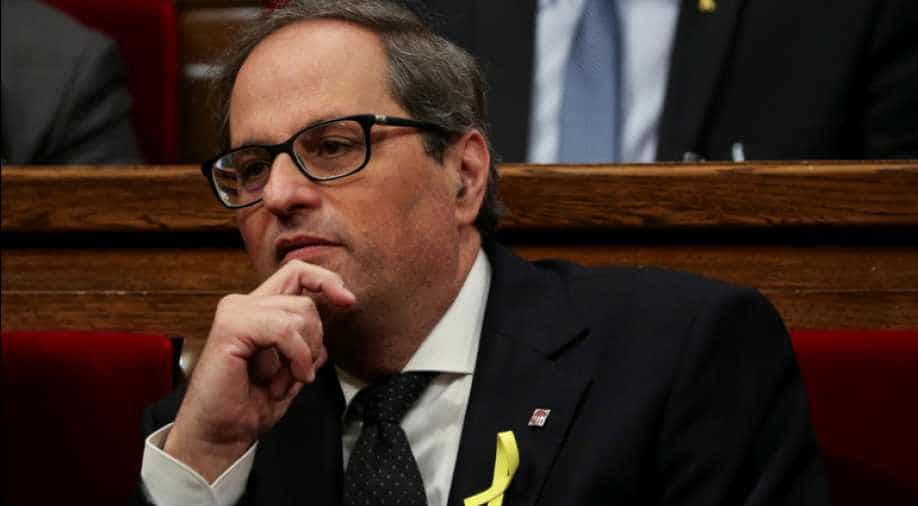 Quim Torra, an editor who was appointed Catalan president Monday after being chosen by ousted regional leader Carles Puigdemont as his successor, is a relative newcomer to politics but has long been a staunch separatist.

While the 55-year-old father of three has only been a lawmaker since December, the man Puigdemont named as his preferred candidate to form a regional government is a dyed-in-the-wool independence advocate cut from the same cloth.

"Long live a free Catalonia," he said after scraping through a vote to appoint him in the regional parliament, where he promised to keep fighting for an independent republic.

He acknowledged his was a "provisional" posting while he awaits the return of his "legitimate president-in-exile", Puigdemont, who is currently in Germany waiting for a court decision on whether to extradite him to Spain where he faces jail on rebellion charges.

Labelled Puigdemont's "puppet" by critics, Torra is determined to keep going despite the failure of Catalonia's secession bid last October.

He is not linked to any separatist parties, and as such Puigdemont has chosen "a hardliner... who will only answer to him," says Oriol Bartomeus, politics professor at the Autonomous University of Barcelona.

Accused of being a 'supremacist'

After a decade of activism for Catalonia, presiding over groups such as the influential pro-independence Omnium Cultural, Torra was elected a lawmaker in December as part of Puigdemont's list Together for Catalonia.

His warm, polite demeanour contrasts strongly with the tone of some of his past writings or tweets -- as revealed by opposition parties -- which his critics say show he is an "ultranationalist" and "supremacist."

In a series of articles published in online media, for instance, he said it wasn't "natural" to speak Spanish in Catalonia. He also described Spain as "a country that exports misery" and slammed those who don't defend the Catalan language and culture as "scavengers, vipers and hyenas."

He also said a new armed uprising was "necessary," just like the one Francesc Macia, Catalan president from 1931 to 1933, planned in 1926 against the military dictatorship of Miguel Primo de Rivera.

A tweet he posted in 2012 also said: "Spaniards only know how to plunder."

"His ideology is perfectly clear," Ines Arrimadas, the leader in Catalonia of the centre-right, anti-independence Ciudadanos party, said Monday.

"He defends xenophobia, he defends a discriminatory identity."

Torra retorted he was sorry that "some tweets taken out of context, aimed at the state government, may have offended people" -- his third apology since he became a candidate.

A native of the Catalan town of Blanes, on the Costa Brava, Torra has been a cultural figure over the last decade.

After a long career with the Swiss insurance firm Winterthur, Torra used a severance package to set up a publishing house in 2008.

There he specialised in reviving texts by Catalan journalists from the civil war and Francisco Franco's dictatorship, which severely repressed Catalonia among other regions.

He soon made a name for himself in Catalan nationalist circles, joining various separatist organisations, including those that helped organise the huge rallies that eventually led to last year's independence push and subsequent political crisis.

Until 2015 he also managed a cultural centre in Barcelona's El Born district which became notorious for pushing for independence.

Torra has said he will adorn the regional government building in central Barcelona with a yellow ribbon, the colour used by separatists to protest on behalf of nine leaders held in jail on rebellion charges.

Ford not able to deliver cars due to lack of badges