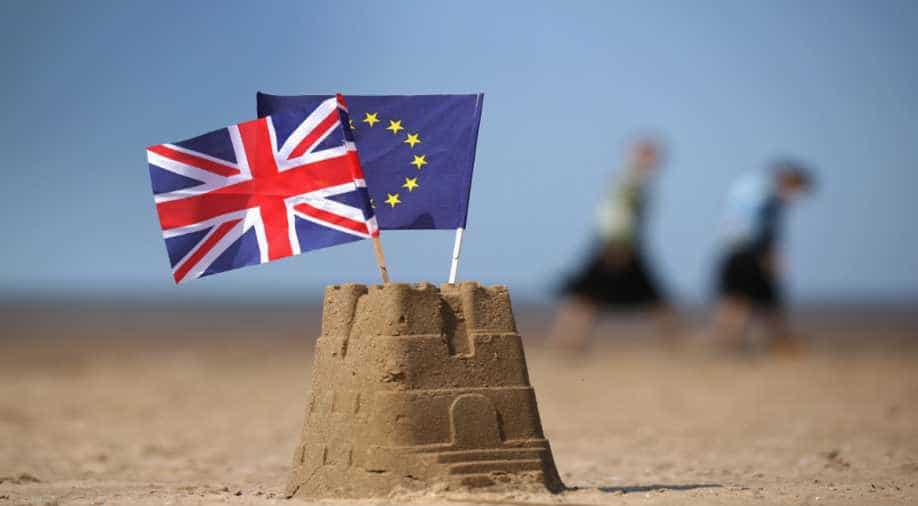 Britain has plunged into a political turmoil since Britons voted by 52 per cent in favour of leaving the European Union, with the ruling Conservatives and opposition Labour party in disarray. Photograph:(Getty)
Follow Us

The favourites to succeed Prime Minister David Cameron pushed Friday for a delay in initiating Britain's talks to leave the EU as French President Francois Hollande insisted "Brexit" cannot be cancelled or delayed.

In further signs of economic fallout from last week's shock vote, the government also warned that Britain will likely abandon a key promise to achieve a budget surplus by 2020, while no-frills airline EasyJet announced contingency plans to ensure its European operations after Brexit.

Britain has been plunged into extraordinary political turmoil since Britons voted by 52 percent in favour of leaving the European Union, with the ruling Conservatives and opposition Labour party in disarray and the country deeply polarised.

As he outlined his bid for Cameron's job on Friday, top Brexit campaigner Michael Gove said he had "no expectation" that Article 50 -- the formal procedure for leaving the EU -- would be invoked this year.

Gove's rival and the current favourite in the race, Theresa May, had said on Thursday that Article 50 "should not be invoked before the end of the year".

EU leaders have called for a swift divorce however, fearful of the impact of Britain's uncertain future on economic growth and a potential domino effect in eurosceptic member states.

"The decision has been taken, it cannot be delayed and it cannot be cancelled, now they have to face the consequences," Hollande said on the sidelines of Battle of the Somme centenary ceremonies in France.

He said a speedy Brexit "would avert all the uncertainties and instability, especially in the economic and financial domains. The faster it goes, the better it will be for them".

Highlighting the uncertainty the "Leave" vote has created for business, easyJet said it was trying to acquire a certificate to operate in a European country "to enable EasyJet to fly across Europe as we do today".

The outcome of the June 23 vote unleashed the worst chaos in British politics in living memory, with opposition Labour leader Jeremy Corbyn's leadership also under threat and Scotland's government fighting for independence to keep its EU membership.

Interior minister May supported the "Remain" campaign but has assured "Leave" supporters she will respect the result, saying: "Brexit means Brexit".

Dozens of MPs have signed up to her campaign.

The winner of the vote to replace Cameron as Conservative leader and therefore prime minister -- a switch that requires no new general election under the British system -- will be named on September 9.

In the coming days, Conservative MPs will whittle down the candidates to two in a series of votes and the rivals will then tour the country to appeal to some 150,000 party members for their vote.

Gove cast doubt on May's leadership bid, saying he did not think someone who had campaigned for a "Remain" vote could lead the country out of the EU.

"I will end free movement (of EU nationals), introduce an Australian-style points-based system for immigration, and bring numbers down," he added.

Cameron, who called the referendum in what was seen as an effort to see off a challenge from the anti-EU UK Independence Party (UKIP), had said he will leave it to his successor to start formal exit talks.

The narrow victory for the "Leave" camp triggered anger among those who wanted to remain in the EU and more than four million people have signed a petition calling for a second referendum.

But asked if May could row back from the Brexit vote, Simon Usherwood, senior fellow at the UK in a Changing Europe think tank, said "Realistically, no.

Bill Durodie from the University of Bath also said: "She cannot and will not ignore the voice of 17.5 million people covering the entire length and breadth of the country".

The bitterly divisive campaign also exposed rifts within Labour, where Corbyn has been heavily criticised for his lukewarm advocacy of the campaign to stay in the EU.

A large majority of Labour MPs have supported a vote of no confidence in Corbyn, a veteran socialist with wide grassroots support who only became leader last year.

But he has defied his centre-left critics to insist he will hang on, challenging them to mount a full leadership contest.