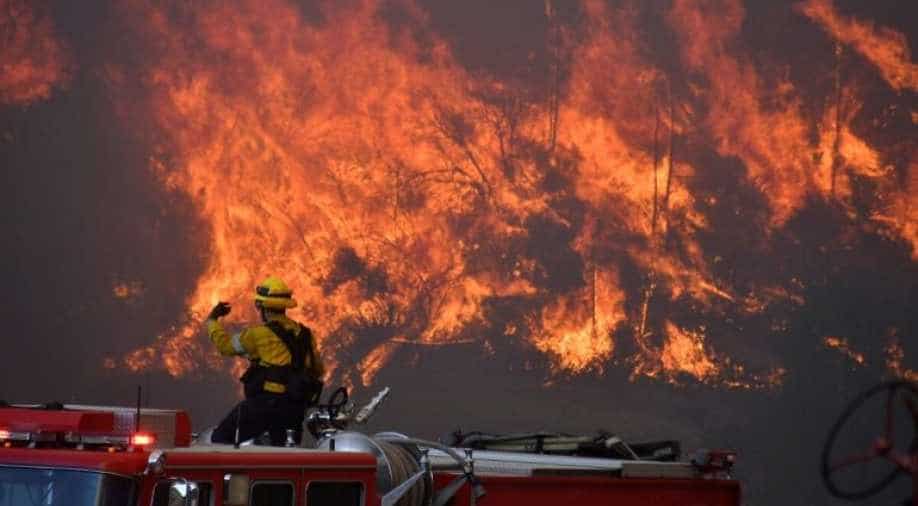 California firefighters aided by subsiding winds took the offensive on Friday against two major wildfires at opposite ends of the state.

California firefighters aided by subsiding winds took the offensive on Friday against two major wildfires at opposite ends of the state, one displacing 50,000 suburban Los Angeles residents and another roaring through Sonoma County's famed wine country.

No injuries have been reported from either the Kincade fire in Sonoma County, about 130 km north of San Francisco or the Tick fire in the Santa Clarita Valley about 65 km north of Los Angeles.

But the two blazes, the worst of several large wildfires across the state this week, have destroyed dozens of homes and other structures while prompting air-quality alerts in parts of Los Angeles and the San Francisco Bay area.

The dry, hot desert winds, gusting to 112 kph, gave way to light breezes on Thursday night, slowing the fires' advance and presenting crews with a chance to make significant headway against the flames.

The lull was expected to be short-lived. Forecasts called for heavy winds to return late on Saturday and persist through the weekend, leaving fire crews a narrow window to tamp down the blazes in Los Angeles and Sonoma counties.

Power companies, led by the state's largest investor-owned utility, Pacific Gas and Electric Co, also were bracing for a renewal of gale-force winds.

Even as PG&E worked to restore electricity to nearly 200,000 homes and businesses switched off ahead of this week's earlier bout of severe winds, the utility announced plans for a new round of precautionary blackouts expected to leave 850,000 customers without power across 36 counties in northern and central California.

The utility cited weather data showing the expected windstorm "could be the most powerful in California in decades."

Adding to PG&E's difficulties, the utility acknowledged on Thursday that the Kincade fire, which forced the evacuation of 2,000 people in Sonoma County after erupting on Wednesday night, began near the base of a damaged high-voltage transmission tower the utility owns.

Lights on and off

A power shutdown of that scale, affecting millions of people, would surpass even the record outage imposed by PG&E on some 730,000 of its customers in anticipation of a previous windstorm two weeks ago.

That precautionary blackout drew sharp criticism from the governor and regulators as being too widespread as well as poorly managed and communicated to the public.

Newsom has said PG&E is largely to blame for its own predicament, arguing corporate greed and mismanagement kept the utility from upgrading its infrastructure while wildfire hazards have steadily worsened over the past decade, a function of climate change.

PG&E, which filed for bankruptcy in January citing billions of dollars in civil liabilities from deadly wildfires sparked by its equipment in 2017 and 2018, says it has since remedied problems experienced with its website and customer call centre.

It has also arranged for extra personnel from affiliated energy companies and the state to assist with the spot inspections required of its de-energised power lines before electricity that has been turned off is allowed to be restored, the company said.

By Friday, the Kincade fire had charred nearly 8,900 hectares in a wine-growing region whose better-known vintners include "The Godfather" director Francis Ford Coppola, and destroyed at least 49 dwellings and other structures, officials said.

Evacuation orders included the entire town of Geyserville, an historic enclave that is home to about 900 residents and is named for geothermal features in the vicinity.

Fire crews, backed by helicopters and aeroplane tankers dumping loads of water and flame-retardant on the blaze, had managed to carve containment lines around just 5 per cent of the blaze as of Friday.

Hundreds of miles to the south, crews battled to suppress the Tick fire, which erupted on Thursday and by Friday had scorched 4,300 acres and was threatening 15,000 homes and businesses, officials said.

An estimated 50,000 people were displaced by evacuation orders in and around Santa Clarita. Poor air quality from thick smoke drifting south prompted the Los Angeles School District to cancel classes for all students in the San Fernando Valley.

"Scary, crazy. We've lived here 37 years and never had to evacuate. So, you know, you always hear about it, you always think, maybe this time. But, yeah, this is the first time," evacuee Terri Egar said.

"This is the largest evacuation that we've had in Santa Clarita," Los Angeles County Supervisor Kathryn Barger told a news conference.