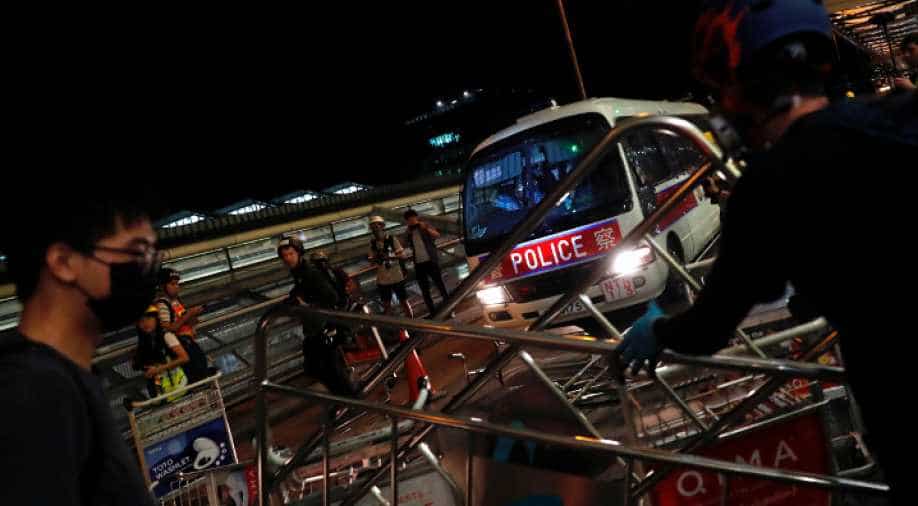 Three senior commanders said they were unaware of any plans by China to bolster their own ranks with mainland troops or police officers, even if the political chaos worsens.

Hong Kong's police are confident they have the resources to continue battling pro-democracy protesters, even if violence escalates further, pouring cold water on concerns that the authoritarian mainland might need to intervene.

Three senior commanders said they were unaware of any plans by China to bolster their own ranks with mainland troops or police officers, even if the political chaos worsens.

And they admitted that any move to do so would place the city's police force in uncharted waters.

But, they insisted, the issue was moot because the local force could handle the crisis.

"I can't envisage it," said one senior commander. "At the operational level we have considerable depth. I think we have the determination, the cohesiveness and the depth of resources to keep going."

The three officers agreed to sit down with a group of foreign journalists on condition of anonymity so they could speak more freely during the worst unrest the force has faced since leftist riots in the late 1960s.

Hong Kong's summer of rage was sparked by broad opposition to a plan to allow extraditions to the mainland, but has since morphed into a wider call for democratic rights in the semi-autonomous city.

Millions have hit the streets while clashes have broken out between police and small groups of hardcore protesters for ten consecutive weeks in the greatest challenge to Beijing's authority since the city's 1997 handover.

With neither Beijing nor Hong Kong's leaders willing to offer any compromises, the police have become the loathed face of the government.

The chant "hak geng" -- corrupt cops -- has become routine, both from protesters and, more recently, local residents infuriated by police engaging in near nightly battles in their neighbourhoods.

But officers insist they have deployed proportionate force against increasingly violent protesters armed with sling-shots, petrol bombs and bricks, and said they remained confident a "silent majority" of Hong Kongers still supported them.

The three officers painted a picture of a force challenged by wildcat protests and hinted at frustration over the intransigence of Beijing and city leader Carrie Lam.

But they also said attacks and insults directed towards their ranks had only reinforced morale and that there were ample reserves to call upon.

Of the 28,000 people in uniform, around 3,000 are engaged in frontline crowd control but there are hundreds of immediate reserves and a "scaling up" plan in place should the protests escalate.

"We're not at full mobilisation by any stage yet," said one officer, a commander on the ground.

As China takes an increasingly hardline tone, state media have published images of military personnel and armoured vehicles across the border in Shenzhen this week.

The United States has warned Beijing against sending in troops, a move many analysts say would be a reputational and economic disaster for China.

The three officers said there had been no discussions about what would happen if Beijing sent reinforcements and that there were no established protocols in place.

Asked if such a move would leave the force in uncharted waters, one officer replied matter-of-factly: "Yes".

All three felt coverage and footage on social media had portrayed the force, or specific confrontations with protesters, in an unfair light and the said officers were now being subjected to routine abuse.

At least 300 police have had personal data -- such as ID card numbers and addresses -- published online. Some have had fraudulent bank loans applied for in their name or food deliveries sent to their homes late at night.

One officer said his teenage daughter was approached by an adult at a recent sports day.

"He pulled her to one side and said 'What your father is doing is disgusting, you should be ashamed'," the officer recalled. "Things like that I feel are completely, completely unreasonable."

Since the clashes began in early June, police have made more than 700 arrests but so far there appears to be no let up in the protests.

And even if the roiling demonstrations end, analysts say the force has suffered unprecedented reputational loss in a city now deeply polarised between those who support and those who loathe the police.

Asked how long it might take to repair that damage, one commander said: "It's not easy. I can't tell you how long it will take, but it's going to take time."

Coronavirus pandemic: 'Worst yet to come' for countries in conflict, says UN chief