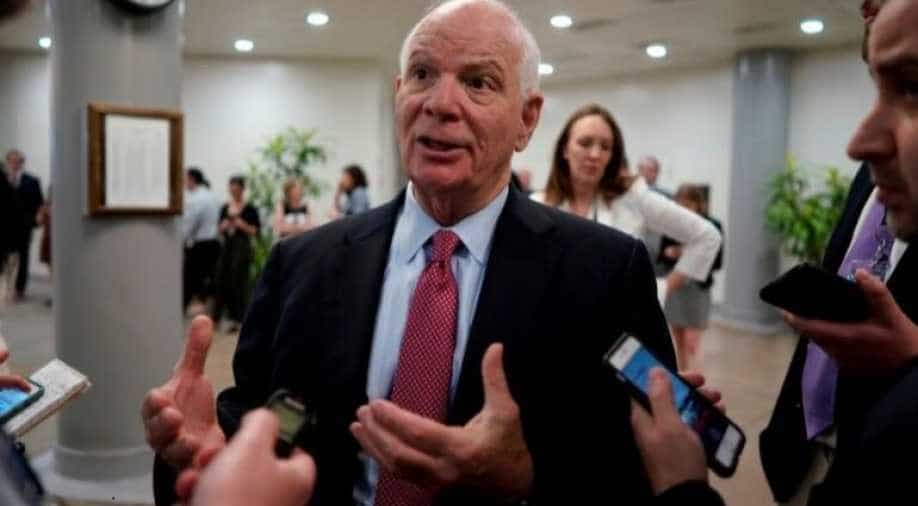 US Senator Ben Cardin (D-MD) speaks with reporters ahead of the weekly policy luncheons on Capitol Hill in Washington, US. Photograph:( Reuters )

The United States is "deeply concerned" about the Chinese paramilitary movement along the Hong Kong border, a US State Department spokeswoman said on Wednesday, while warning that continued erosion of the territory's autonomy put at risk the preferential status it enjoys under US law.

Another US official said Beijing had stationed large numbers of paramilitary People's Armed Police (PAP) "near and further out from Hong Kong," in response to weeks of street protests in the territory, but said there had been no sign they were moving towards the border.

The number of personnel was "in the thousands," said the official, who did not want to be identified.

"They have amped up training and made it all pretty visible," he said, but added: "There are no recent indicators that they are preparing to deploy."

It cited video it had obtained showing numerous armoured personnel carriers (APCs), trucks and other vehicles on expressways heading in the direction of Shenzhen over the weekend.

It noted that the role of the PAP was "dealing with rebellions, riots, serious violent and illegal incidents, terrorist attacks and other social security incidents."

Satellite images made available to Reuters on Wednesday from Maxar Technologies showed dozens of vehicles, including what appeared to be APCs, at the Shenzhen Bay Sports Centre across the harbour from Hong Kong.

On Tuesday, US President Donald Trump cited American intelligence as saying that China was moving troops to its border with Hong Kong, and urged calm as clashes continued between protesters and authorities in the former British colony.

The State Department's expression of concern came after senior US lawmakers from both the Democratic and Republican parties called on Trump to take a tougher line with China as worries grew over a possible Chinese intervention.

The State Department spokeswoman reiterated the US call for all sides to refrain from violence and said it was important for the Hong Kong government to respect "freedoms of speech and peaceful assembly" and for Beijing to adhere to its commitments to allow Hong Kong a high degree of autonomy.

A 1992 US law affords Hong Kong preferential treatment in matters of trade and economics compared with China.

Areas of special treatment include visas, law enforcement, and investment.

A prominent US senator warned China on Tuesday that Hong Kong could lose its special US trade status if Beijing intervened directly to crack down on increasingly violent pro-democracy protests in the city.

Trump, who has been seeking a major deal to correct trade imbalances with China, has faced criticism from Congress and elsewhere for not taking a stronger public line on HongKong and for his characterization of the protests earlier this month as "riots" that were a matter for China to deal with.

The Republican president said on Tuesday the situation in HongKong was "tricky," but hoped it would work out for everybody, including China, and "for liberty" without anyone getting hurt or killed.

The US official said the PAP units seemed to have been stationed at Shenzhen to intimidate the protesters, but the protests had yet to reach a level that would compel Beijing to send them in.

"I don’t think they’ve reached any tipping points," he said.

While China wanted to maintain control, "nobody on the opposition side has crossed any red lines," the official said.

"They haven’t called for independence. They’ve walked up to the line and caused a lot of disorder, but overnight they apologised to everybody. Both sides are carefully calculating how far and how close they come to those lines."

On Tuesday, US Senator Cory Gardner, the Republican chair of the Senate's East Asia subcommittee, said the Trump administration "must make clear to Beijing that any crackdown inHong Kong will have profound consequences for China, including the imposition of US sanctions."

On Wednesday, the Democratic chairman of the US House of Representatives Foreign Affairs Committee, Eliot Engel, and the panel's leading Republican, Michael McCaul, said they were concerned that 30 years after the Tiananmen Square massacre, China might again consider brutally putting down peaceful protests.

"We urge China to avoid making such a mistake, which would be met with universal condemnation and swift consequences," they said in a statement.

Earlier on Wednesday, the State Department issued a travel advisory urging "increased caution in Hong Kong due to civil unrest."

Hong Kong has been engulfed in protests since earlier this summer.

Flights resumed on Wednesday at the Hong Kong airport, one of the world's busiest, which shut down for two days after demonstrators occupied it.