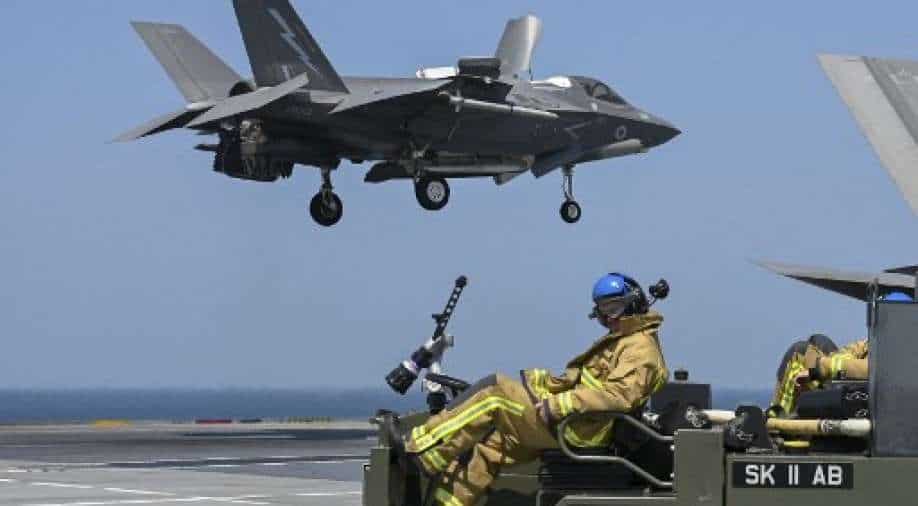 A British serviceman sits on a vehicle as the F-35B fighter jet prepares to land on the flight deck of UK Carrier Strike Group’s HMS Queen Elizabeth in the Arabian Sea, off Mumbai's coast. Photograph:( AFP )

In a tweet, the Ministry of Dence informed that the pilot from HMS Queen Elizabeth ejected during routine flying operations in the Mediterranean.

A British F-35 aircraft, one of the newest stealth fighter jets in UK military costing 100 million pounds, crashed into Mediterranean Sea during a routine exercise, the Ministry of Dence said on Wednesday.

In a tweet, the ministry informed that the pilot from HMS Queen Elizabeth ejected during routine flying operations in the Mediterranean.

A British F35 pilot from HMS Queen Elizabeth ejected during routine flying operations in the Mediterranean this morning.

The pilot has been safely returned to the ship and an investigation has begun, so it would be inappropriate to comment further at this time.

“We are pleased the pilot is safe and well and back on board,” BBC quoted Wallace as saying.

Wallace further said that operational and training flights onboard HMS Queen Elizabeth are continuing despite the incident.

UK operates the F-35B, a single-engine, short-take-off vertical landing variant of the US stealth jet. It was developed by US firm Lockheed Martin. The aircraft are Britain's most advanced and expensive jets.

There are eight UK F-35Bs on the carrier and 10 from the US Marine Corps.

They have conducted around 2,000 take-off and landings on board HMS Queen Elizabeth without any major incident over the past six months.

The F-35 jet contains highly sensitive technology and data. It is hard to detect on radar and is one of the most expensive defence projects undertaken by the American military.

According to CNN, Britain plans to acquire 138 more F-35 jets, making it the third-largest operator of the Lockheed-Martin produced jets, behind the United States and Japan.

This is the first time a UK F-35 has crashed, but CNN reports that both the US and Japan have lost F-35s to accidents.