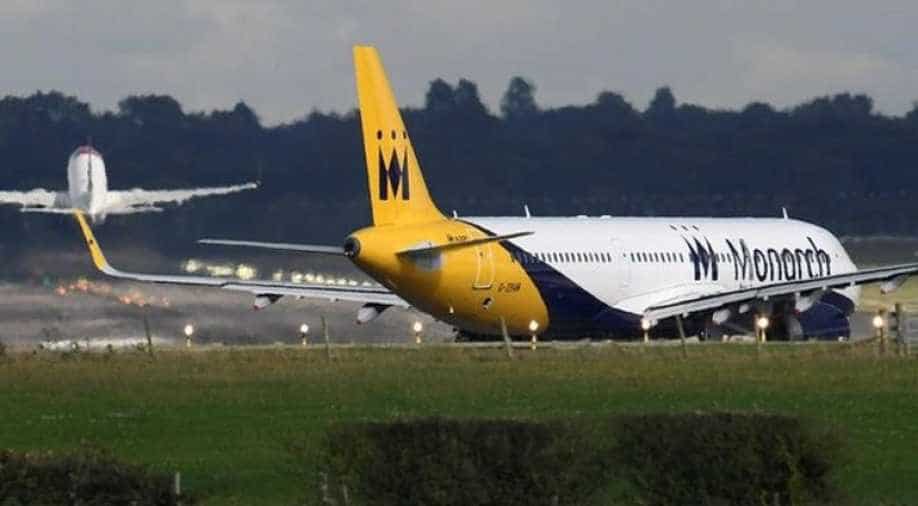 Monarch Airlines collapsed on Monday marking it to the biggest ever failure of a British airline. Photograph:( Reuters )

Monarch canceled about 300,000 future bookings and apologised to customers and staff as it became the UK's largest carrier to go into administration ||

Monarch Airlines collapsed on Monday, the biggest ever failure of a British airline, stranding tens of thousands of travelers overseas and prompting the country's biggest-ever peacetime repatriation effort.

Monarch canceled about 300,000 future bookings and apologised to customers and staff as it became the UK's largest carrier to go into administration.

"I am so sorry that thousands now face a canceled holiday or trip, possible delays getting home and huge inconvenience as a result of our failure," Monarch Chief Executive Andrew Swaffield told employees in a message.

"I am truly sorry that it has ended like this."

Transport secretary Chris Grayling said the company fell victim to a price war overflights to the Mediterranean and told customers not to come to airports.

"We are doing our best to make sure that those people who are stranded and can't get back otherwise will be able to do so," he told BBC television, adding that he expected many of Monarch's more than 2,000 staff to get jobs elsewhere.

The British government has asked the Civil Aviation Authority (CAA) to charter more than 30 aircraft to bring back to the UK about 110,000 Monarch customers currently overseas, the CAA said.

Tough competition has been pressuring European airlines and driving consolidation, with Air Berlin and Alitalia filing for insolvency this year and seeking new investors for parts of their businesses.

The collapse will be a headache for some of the world's largest leasing companies, which financed its current fleet of 36 mainly Airbus jets, and for Boeing Co, which has sold the airline 32 of its 737 MAX aircraft. None of the planes has yet been delivered.

Although relatively small compared to Europe's leading scheduled carriers, Monarch had been a regular hotspot in the global battle for market share between plane makers as it shifted its loyalties between Airbus and Boeing.

Boeing secured Monarch's agreement to revert back to its jets in 2014 following a fierce contest against Airbus and Bombardier.

"We are working with the joint administrators and the CAA to do everything we possibly can to help minimise disruption where we can, but are under no illusion as to the problems this will cause," Monarch's Swaffield said.

"And many suppliers will suffer hugely as a result of our insolvency – for which I am equally sorry."

According to flight-tracking service Flightradar24, some 25 aircraft had been lined up to start repatriating passengers by 0600 GMT on Monday, including 10 from Qatar Airways already based in Europe on behalf of British Airways. An easyJet airplane and several charter aircraft were also part of the operation.

Monarch had previously said it was talking to potential partners after a report that parts of its short-haul network would be sold.