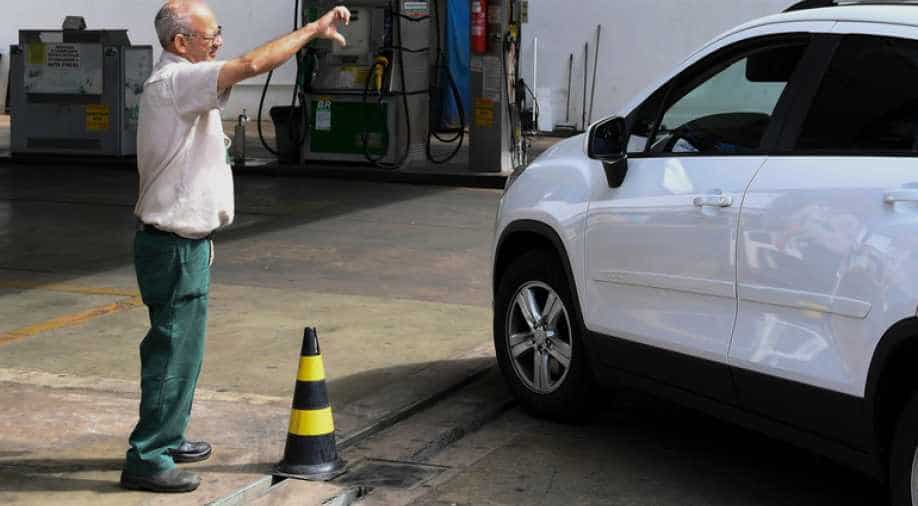 An attendant gestures to a driver at a gas station in which fuel has ran out in Brasilia, on May 24, 2018. Photograph:( AFP )

After days of continued nationwide strike by Truckers in Brazil, the government and transport unions reached a deal to suspend the strike which&nbspcaused a massive shortage of fuel and food in various areas.

President Michel Temer's chief of staff, Eliseu Padilha told reporters that the Union heads representing truckers have committed to "suspend the strike movement for 15 days when a new meeting with the government will be held."

The announcement was made on the night of the fourth day of the strike after the seven hours of negotiations with transportation unions.

After the negotiations on Thursday, the government has also assured to abolish at least one tax on diesel and implement subsidies to maintain a temporary 10 per cent fuel price reduction.

The demonstrators are protesting against the rising diesel prices, as the blocked main roads in nearly all states of Brazil which already has limited rail services.

Brazil's economy runs largely on road transport, and truckers are on strike from past four days paralyzing transportation of the country.

Following the strike airports and gas stations were running out of fuel as well as agricultural exports was also hit.

Air services were also affected. According to reports, Brasilia, the capital of Brazil allowed landings of the planes which had enough fuel to take off again.

However, no flight cancellations were reported.

In the port of Santos near Sao Paulo -- the largest in Latin America -- there were virtually no arrivals or departures of trucks for three days, the management said, even if the "loading and unloading operations of ships continues normally" for now.

School were also closed during the strike.

Following the supply problem people also faced a hike in prices of fruits and vegetables. In some places, prices were reportedly hiked up to 400 per cent.

Pump prices were also higher as long lines were formed at many gas stations.

The increase in the diesel price is the result of a politically sensitive decision made in late 2016 to allow the Petrobras oil giant autonomy over its pricing, as well as a rise in world prices in recent weeks.

But the determination of the truckers caught centre-right President Michel Temer's government flat-footed, five months ahead of presidential elections.

As a way of defusing an increasingly out-of-control situation, Petrobras yielded to pressure on Wednesday and reduced fuel prices for 15 days, sending its shares plunging by around 14 per cent on the Sao Paulo stock market by the close on Thursday.

As a temporary measure on Wednesday's night, the lower house of Congress had decided to eliminate the two taxes on diesel until the end of the year. However, it is yet to be approved&nbspby Senate.