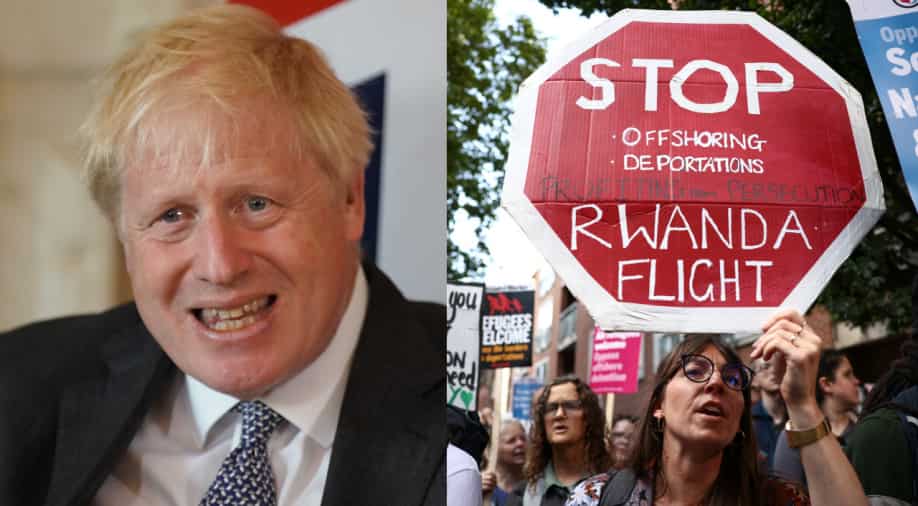 The plan has horrified political opponents, charities and church leaders who say it is inhumane. The United Nations refugee chief called it "catastrophic," and the entire leadership of the Church of England denounced it as an "immoral policy that shames Britain."

The UK government would not be "deterred or abashed" by criticism and legal challenges against its Rwanda immigration plan ahead of the first scheduled flight on Tuesday said British Prime Minister Boris Johnson.

The flight to take asylum seekers to Rwanda was due to depart on Tuesday, with the government warning that anyone who avoided it through last-minute legal challenges would be put on a later flight anyway.

Johnson said, “ The objective is to ensure that we make that clear distinction that I think everybody can see is fair and reasonable, between legal immigration to this country by safe and legal routes, that we support and uphold and protect because we all understand the benefits that it brings. And distinguishing that from dangerous and illegal cross Channel migration which we intend to stop."

Britain has struck a 120-million-pound ($148 million) deal with Rwanda to send some migrants, who had arrived illegally by crossing the Channel in small boats from Europe, to live in the landlocked African country.

The government says the deportation strategy is needed to stem the flow of migrants risking their lives in channel crossings and smash the people-smuggling networks.

"What we see now is our policy, the Economic and Migration Partnership with Rwanda, that we have engaged upon, now under a huge amount of attack," Johnson told a meeting of his cabinet ministers on Tuesday.

The plan has horrified political opponents, charities and church leaders who say it is inhumane. The United Nations refugee chief called it "catastrophic," and the entire leadership of the Church of England denounced it as an "immoral policy that shames Britain."

"My message today is that we are not going to in any way deterred or abashed by some of the criticism that has been directed upon this policy - some of it from slightly unexpected quarters - we're going to get on and deliver," Johnson told ministers.

She also spoke about a potential legal fight with the EU over London's plan to override some post-Brexit trade rules.

"I want that negotiated solution, but we do need the EU to be prepared to change the text," Truss said on Tuesday morning.