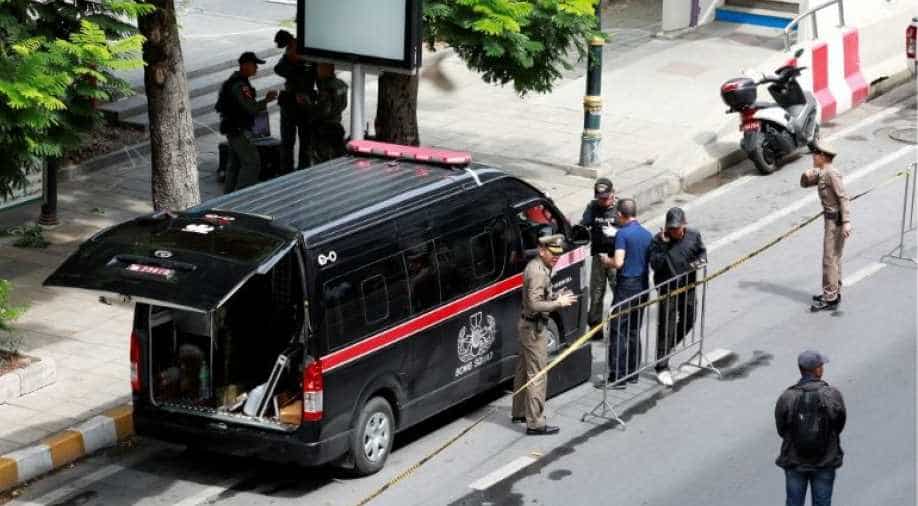 Prime Minister Prayut Chan-O-Cha, who led the former junta, told reporters 'there were nine successful or attempted explosions... we haven't ruled out any motives.'

Two men from Thailand's insurgency-hit "Deep South" have been arrested linked to several small bomb attacks which rattled Bangkok Friday as it hosted a regional summit attended by US Secretary of State Mike Pompeo, leaving four people wounded but not disrupting the diplomatic event.

Thailand, which has a grim history of political violence and is fighting a long-running rebellion in the Muslim-majority south, remains deeply divided after a controversial March election returned a junta to power as a civilian government.

Prime Minister Prayut Chan-O-Cha, who led the former junta, told reporters "there were nine successful or attempted explosions... we haven't ruled out any motives."

Two men from the far south were arrested after wires and ball bearings were found in an inactive device outside Thai police headquarters late Thursday, in what police said was a linked incident.

Police chief Jakthip Chaijinda confirmed the men came to the Muslim-majority area bordering Malaysia which is in the grip of a 15-year insurgency.

But he said it was "too early" to clearly tie them with the rebellion.

Any connection to the insurgency will cause deep alarm in Bangkok, which has failed to win peace in a conflict which has left more than 7,000 dead.

Occasionally the shadowy rebel cells take their violence outside their region to mark key anniversaries or kickback against specific Thai actions.

Outrage is boiling in the south over the treatment of a 34-year-old rebel suspect who was left in a coma hours after being taken into a notorious military interrogation centre in Pattani province.

The blasts in Bangkok Friday appeared to be symbolic attacks aimed at embarrassing the government during a major summit but not designed to cause mass casualties.

Small devices -- some believed to be so-called "ping pong bombs" around the size of a table tennis ball -- exploded at several locations across the city, none close to the summit venue.

"Reports are they were 'ping pong bombs' hidden in bushes by the road," said Renu Suesattaya, director of Suanluang district where the first bombs were reported.

Bomb disposal experts were deployed around the Mahanakorn Tower -- owned by the King Power group that counts Leicester City football club among its assets.

Most of the dead in the highly-localised insurgency in the south are civilians, but the conflict garners few international headlines.

Malay-Muslim militants are fighting for autonomy from Thailand which annexed the region over a century ago.

Friday's bombings took place just before a keynote speech by top US diplomat Pompeo, in which he praised Thailand for rejoining the "democratic fold" after five years of outright junta rule.

The blasts come weeks after former junta leader Prayut was inaugurated as a civilian prime minister, sparking outcry among many pro-democracy supporters in a kingdom scored by divisions.

The junta manoeuvred itself back into power with the help of a fully appointed senate stacked with army loyalists and an electoral system its critics say was designed to limit the success of the pro-democracy parties.

Deadly bombings and shootings linked to politics are often carried out by shadowy forces who are never held accountable.

Thailand's last hosting of ASEAN in 2009 was also overshadowed by unrest.

Then, "Red Shirt" protesters smashed their way into the summit venue in the resort city of Pattaya demanding elections.

Pandemonium ensued, with a number of leaders having to be rescued from a hotel roof by Thai army helicopters while others fled by boat.