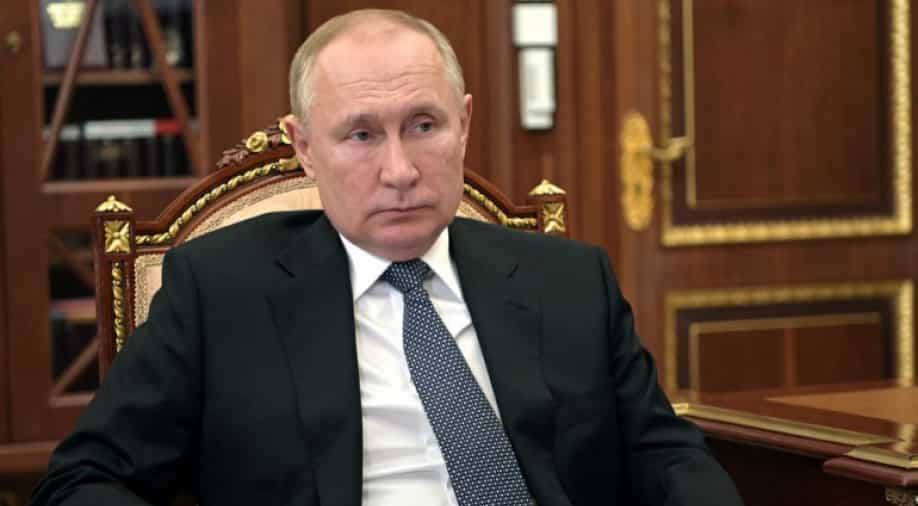 Russia's President Vladimir Putin chairs a meeting on the country's economy via a video link at a residence outside Moscow, Russia Photograph:( Reuters )

The diverging assessments showed how the effect of the West’s sanctions in response to Russia’s invasion of Ukraine, and their ability to weaken Putin’s grip on power, remains uncertain nearly two months into the war

Russia’s central bank chief warned Monday that the consequences of Western sanctions were only beginning to be felt, and Moscow’s mayor warned that 200,000 jobs were at risk in the Russian capital alone, stark acknowledgments that undermined President Vladimir Putin’s contention that sanctions had failed to destabilize the Russian economy.

The diverging assessments showed how the effect of the West’s sanctions in response to Russia’s invasion of Ukraine — and their ability to weaken Putin’s grip on power — remains uncertain nearly two months into the war.

Although experts say Russia faces an economic time bomb as its inventory of imported goods and parts runs low, Putin is using the fact that the Russian economy has not yet collapsed to bolster his contention that sanctions will not deter him.

Western sanctions, Putin said Monday in a televised videoconference with senior officials, were meant to “rapidly undermine the financial and economic situation in our country, provoke panic in the markets, the collapse of the banking system and a large-scale shortage of goods in stores.

“But we can already confidently say that this policy toward Russia has failed. The strategy of an economic blitzkrieg has failed.”

Putin was, in part, addressing a domestic audience, seeking to reassure Russians who have had to endure worries about cash shortages, a battered stock market and the shuttering of popular Western retailers such as Ikea.

Putin said he was prepared to increase government spending to stimulate the economy, an indication that continued revenues from energy exports are giving the Kremlin the flexibility to soften the blow of sanctions.

Aggressive capital controls imposed by the central bank have helped the ruble recover from its crash in the days after the invasion. And there are few reports of major layoffs or of extensive food shortages in grocery stores.

But contrary to Putin’s optimism, two senior officials cautioned Monday that the real economic pain was yet to come. Moscow Mayor Sergei Sobyanin announced a $40 million program to help people laid off by foreign companies find temporary employment and new jobs; according to his office’s estimates, he said, “around 200,000 people are at risk of losing their jobs” in the city of 13 million.

And in an appearance at the lower house of parliament, Elvia Nabiullina, chair of the Russian Central Bank, gave a more far-reaching, negative assessment. She told lawmakers that although the sanctions’ effect had largely been on the financial markets at first, they “will now begin to increasingly affect the real sectors of the economy.”

For example, she said, “practically every product” manufactured in Russia relies on imported components. Factories, for now, may still have them in stock. But because of new Western export restrictions, Russian companies will be forced to shift their supply chains or start making their own components.

“At the moment, perhaps this problem is not yet so strongly felt, because there are still reserves in the economy, but we see that sanctions are being tightened almost every day,” she said. “But the period during which the economy can live on reserves is finite.”

Nabiullina, an internationally respected central banker who reportedly tried to resign in the days after the war, said about half of the central bank’s $600 billion foreign currency and gold reserves remained frozen because of sanctions. Those reserves that the bank still controlled, she said, were mainly gold and yuan — of little use in trying to stabilize the ruble — forcing the bank to resort to capital controls such as limiting how much foreign currency can be taken out of the country.

In his televised videoconference later in the day with Nabiullina and several other officials, Putin acknowledged that the Russian economy did face some problems, including inflation. He said he had already directed the pensions and salaries of state employees — part of Putin’s political base — to be adjusted for inflation and indicated he supported greater government spending to stimulate the economy.

“The budget should actively support the economy, saturate the economy with financial resources and maintain its liquidity,” Putin said. “There are opportunities for this. Of course, we need to act carefully.”