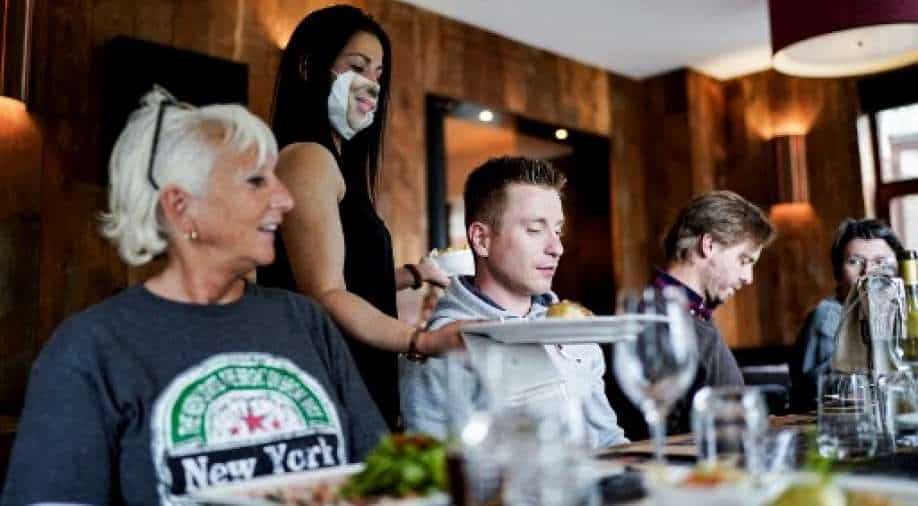 A waitress wearing a protective face mask with a picture of her face works at a restaurant in Brussels Photograph:( AFP )

The country's authorities will now allow one in five workers to return to the office in four weeks' time and at home four guests will be allowed inside people's homes instead of two.

Belgium is set to allow indoor drinking, dining and entertainment venues to reopen for audiences of up to 200 people from June 9 as the coronavirus cases have declined in the country.

Earlier cafe and restaurants with outdoor seating had reopened on Saturday after almost seven months.

Prime Minister Alexander de Croo said: "We have taken giant steps forward," on the vaccination programme adding that the country's authorities expect to vaccinate 80 per cent people over 65.

However, the prime minister cautioned that it was necessary to "keep the situation under control in the intensive care units".

The country's authorities will now allow one in five workers to return to the office in four weeks' time and at home four guests will be allowed inside people's homes instead of two.

Large events will now be allowed in the country including shows, exhibitions and theatres with a maximum of 200 people allowed inside.

Belgium has over 1 million coronavirus cases with a daily average of 2,936 in the past week but vaccination has gathered pace with over 3.5 million people having received at least the first dose out of a population of 11.5 million.

"From June 9, we will allow the organization of larger events, both indoor or outdoor," PM Croo asserted, adding, "The mask will be compulsory outside and obviously inside. From June 9, the opportunities will be extended every month."

Belgium has 24,000 recorded fatalities due to the virus but has seen a drop in cases recently.