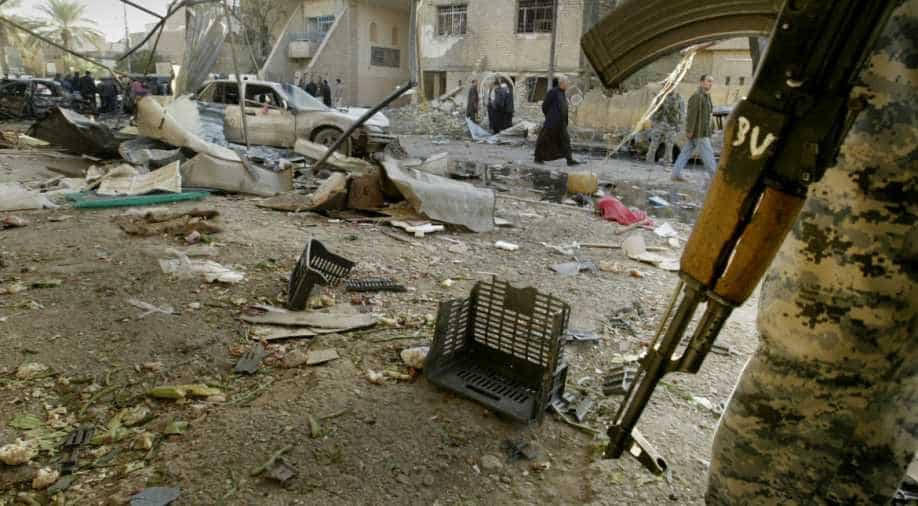 Baghdad has been on high alert since the start on October 17 of an offensive, Iraq's largest military operation in years, to retake the northern jihadist stronghold of Mosul.(Representative image) Photograph:( Getty )

An officer in the interior ministry and a hospital official confirmed the toll from the attack, which was claimed by the Islamic State (IS) jihadist group via its propaganda agency Amaq.

"Many of the victims were people from the spare parts shops in the area, they were gathered near a cart selling breakfast when the explosions went off," said Ibrahim Mohammed Ali, who owns a nearby shop.

Torn clothes and mangled iron were strewn across the ground in pools of blood at the site of the wreckage near Rasheed street, one of the main thoroughfares in Baghdad, an AFP photographer said.

"Twin terrorist attacks were carried out by suicide bombers in Al-Sinek neighbourhood," an official from Baghdad operations command told AFP.

The area is packed with shops, workshops and wholesale markets and usually teeming with delivery trucks and labourers unloading vans or wheeling carts around.

Baghdad has been on high alert since the start on October 17 of an offensive, Iraq's largest military operation in years, to retake the northern jihadist stronghold of Mosul.

IS has tried to hit back with major diversionary attacks across the country but has had little success in Baghdad. Saturday's twin bombings were the deadliest in the capital since the start of the Mosul offensive.

Huge crowds were expected to gather on Saturday evening in Baghdad's streets to celebrate the New Year for only the second time since the lifting in 2015 of a years-old curfew.

Last year revellers turned out for celebrations that lasted most of the night despite an already tense security backdrop.

"On the last day of 2016 and as Iraqi people are preparing to receive the new year with hopes of peace, the terrorists struck once again at innocent civilians," the UN's top envoy in Iraq, Jan Kubis, said in a statement.

A year on, the IS jihadist group appears to be on its last legs and is defending its last bastions in Iraq but the going has been tough for the tens of thousands of Iraqi forces on the ground.

Iraqi Prime Minister Haider al-Abadi had vowed earlier in 2016 that his forces would rid the country of IS by the end of the year but the Mosul operation has been slower moving that expected.

This week he told a televised news conference that Iraqi forces would now require at least another three months.

The jihadists are vastly outnumbered in Mosul but they have had more than two years to build up their defences in the city where Abu Bakr al-Baghdadi proclaimed a "caliphate" in June 2014.

The Pentagon said Friday Baghdadi and was still alive and leading the organisation and stressed that the coalition was actively hunting down the Iraqi-born jihadist supremo.

"We're doing everything we can. This is something we're spending a lot of time on," spokesman Peter Cook told CNN.

Air support by the US-led coalition has been hampered by the continued presence of hundreds of thousands of civilians inside Mosul.

Elite Iraqi forces have battled their way into the city mostly from the eastern side, going house-to-house in densely populated areas, but they barely control half of the city's eastern sector more than 10 weeks into the offensive.

One of the top Iraqi commanders in the Mosul area announced on Thursday that the offensive to reconquer the eastern bank of the Tigris in Mosul had entered a new phase.