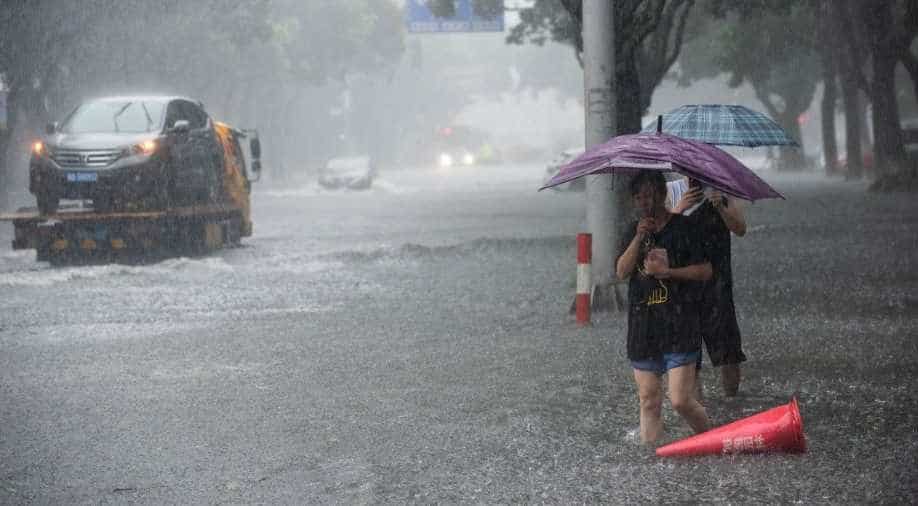 The tragedy occurred in the municipality of Wenzhou, which was in the path of the storm as it made landfall overnight, CCTV said.

At least 13 people were killed and 16 others missing in a landslide after Typhoon Lekima lashed eastern China, national television reported Saturday.

The tragedy occurred in the municipality of Wenzhou, which was in the path of the storm as it made landfall overnight, CCTV said.

"Torrential rains caused a landslide on a mountain that blocked a river below," it said.

The resulting "dam" created a lake which swept downstream when it burst.

More than a million people were evacuated from their homes ahead of the storm, which slammed into eastern China early Saturday, bringing torrential rain and heavy winds that knocked out power and downed thousands of trees, state media reported.

The monster storm made landfall in the early hours in Wenling City packing winds of 187 kilometres per hour (116 miles per hour), and was expected to churn up the east coast towards Shanghai, Xinhua news agency said.

More heavy rain was forecast for the Shanghai area as well as the eastern provinces of Anhui, Fujian, Jiangsu and Zhejiang, with authorities warning of possible flash floods, mudslides and landslides caused by the downpours.

In Zhejiang province alone, nearly 300 flights were cancelled, and ferry and rail services were suspended as a precaution.

More than a quarter of a million people were relocated in Shanghai, where the high-speed maglev train that links the city to one of its airports was suspended.

China issued a red alert as the storm approached on Friday, before downgrading the level to orange as winds eased on Saturday morning.

The storm had earlier swept past the northern tip of Taiwan on Friday, where nine people were injured, thousands of homes lost power temporarily and more than 500 flights were cancelled.

Last September, Typhoon Mangkhut slammed into mainland China where authorities evacuated more than two million people after it left a trail of destruction in Hong Kong and Macau and killed at least 59 people in the northern Philippines.