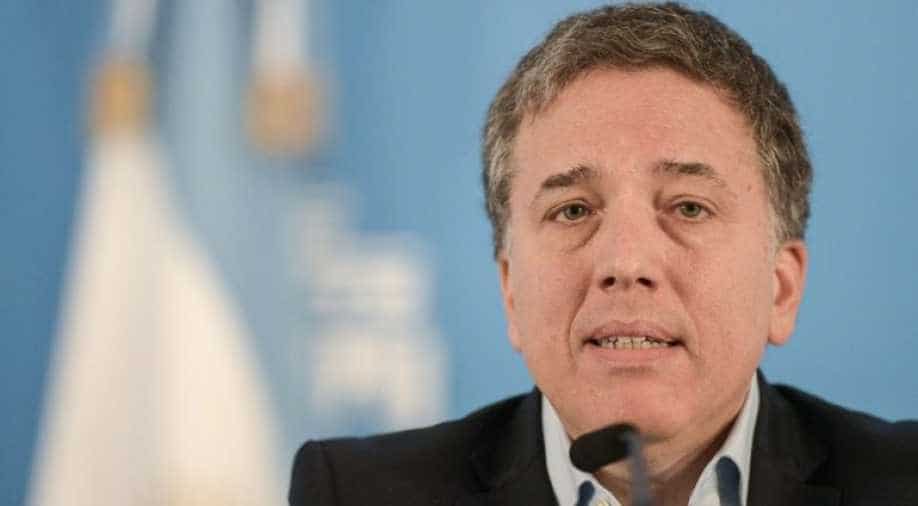 Argentina's Economy Minister Nicolas Dujovne resigned Saturday after a week of economic tumult caused by President Mauricio Macri's defeat in a primary poll ahead of a general election.

The country's peso ended the week having shed 20 per cent of its value against the US dollar as both Fitch and S&P cut the South American country's long-term credit rating, citing increased uncertainty and a rising risk of default.

Dujovne said, in a letter posted on the website of La Nacion newspaper, he was "convinced that, under the circumstances, the (government's) management needs significant renewal in the economic arena."

He leaves in the middle of a deepening economic crisis following last Sunday's primary elections in which market-friendly Macri was dealt a huge blow in his bid for re-election when he polled 15 points less than centre-left Peronist candidate Alberto Fernandez.

The primaries serve as a bellwether for general elections in October. Dujovne's announcement marks the first change in Macri's cabinet since voters went to the polls.

Fitch, which downgraded Argentina's credit rating two notches to "CCC," said the centre-right's defeat "increases risks of a break from the policy strategy of the current administration of Mauricio Macri guided by a program with the IMF."

Fernandez, now the clear favourite to unseat Macri, has questioned the reform program backed by a $56 billion rescue package from the International Monetary Fund.

Standard & Poor's dropped Argentina's rating a single grade from "B" to "B-."

"My resignation is consistent with a government and political space that listens to the people and that acts accordingly," Dujovne said, in a clear message to the Argentine electorate, which still has two months left until voting in the presidential elections.

The country is currently in a recession and posted 22 per cent inflation for the first half of the year -- one of the highest rates in the world -- but the IMF said Macri's reform program was beginning to yield results.

The new economy minister will have the difficult task of trying to instil peace of mind in the markets while simultaneously dealing with the country's recession in the midst of Macri's uphill election battle.

In Argentina, 32 per cent of the population lives below the poverty line.

The country has annual inflation of more than 50 per cent.

Why reopening schools can be disastrous during COVID-19 crisis