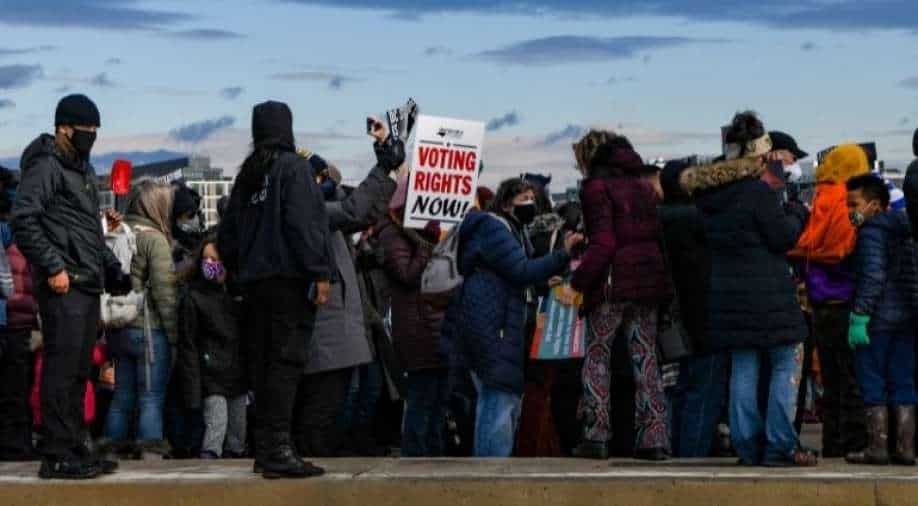 A rump group of senators in both parties has recently ramped up discussions aimed at reaching a compromise on voting legislation, leading Democrats who saw their far broader voting rights package stall in the Senate last week to be wary

Sen. Richard Blumenthal, D-Conn., was finally closing in on a hard-fought agreement with Republicans on a gun safety measure, following a string of horrific shootings in 2019, when the talks suddenly collapsed.

New plans in the House to impeach former President Donald Trump meant that Republicans were no longer in the mood to compromise with Democrats on anything, and the emerging accord went the way of so many seemingly promising ones on Capitol Hill in recent years, stymied by Republicans who said they were willing to accept some sort of deal — just not that one.

“The world has become so polarized that our Republican colleagues come so very close to closing a deal, but then they begin staring down the abyss of their base and they recoil,” said Blumenthal, who attributed the Republican recalcitrance to fear of a political backlash for any cooperation with Democrats.

The same has been true for other politically charged issues where efforts at compromise have ended up going nowhere in Congress. Republicans initially seemed willing to engage on legislation addressing immigration and police misconduct, for example, only to abruptly pull back, blaming Democrats for what they called unreasonable demands or a refusal to take hard steps that might anger their liberal supporters.

So as a group of senators in both parties has recently ramped up discussions aimed at reaching a compromise on voting legislation, leading Democrats who saw their far broader voting rights package stall in the Senate last week have been wary.

They worry that the emerging legislation could be a distraction from the pressing issue their bill was meant to address — Republican voter-suppression efforts at the state level — and amount to little more than cover for Republicans who want to appear interested in protecting election integrity despite uniformly opposing Democrats’ voting rights bill.

They have taken note that Sen. Mitch McConnell, R-Ky., the minority leader, has blessed the effort — a telltale sign, say Democrats who have learned to be endlessly suspicious of his motives, that it might go nowhere.

The Democratic fear is that once the moment passes and attention shifts away from election law to spending issues and now a contentious Supreme Court nomination, the talks will fizzle and Democrats will be left with nothing to show for their voting rights drive, even as the 2022 midterms loom and the 2024 election is just over the horizon.

But leaders of the talks that now include at least 16 senators divided between Republicans and Democrats say they are substantive, gaining momentum and could produce legislation that might prevent another Jan. 6-style confrontation by focusing on fixing the deficiencies in the 135-year-old Electoral Count Act.

They point to the bipartisan infrastructure measure that many of the same lawmakers were able to produce last year as their model for negotiations and as proof that compromise is still possible.

“I’m encouraged by the fact that almost every day, someone calls me and asks to join our group,” said Sen. Susan Collins, R-Maine, a centrist and a leader of the compromise effort. She characterized its members, who met virtually this week, as ranging from “pretty conservative to pretty liberal.”

“This is a serious, committed group of senators from both sides of the aisle,” she said in an interview. “This is not a surface effort.”

Aiding the outlook for the talks is the fact that Sen. Chuck Schumer, D-N.Y., the majority leader, is also now encouraging them. He is taking what one ally described as a wait-and-see attitude after initially lashing out at the potential compromise as a ruse to undercut the Democratic voting rights package.

Virtually all Democrats back the idea of fixing the Electoral Count Act, which lays out the ceremonial process by which Congress makes an official count of the presidential election results to confirm the victor, to guard against its being exploited in the way that Trump and his allies attempted to do so.

But they caution that it is no substitute for their proposals, which focus on countering efforts to make it harder for minorities to vote and restoring parts of the landmark Voting Rights Act.

“I don’t think anybody is against fixing the piece,” Sen. Chris Van Hollen, D-Md., said about the electoral vote counting process. “But nobody should pretend that this in any way solves the bigger issues regarding the attack on our democracy.”

Collins, however, said that the focus on how presidential electoral votes are tallied should be the aim of any new voting legislation as a direct response to the assault on the Capitol last January by Trump’s supporters seeking to interfere with the tally.

“That the Democrats didn’t put anything on the Electoral Count Act in their 735-page bill is astounding to me given the link to Jan. 6,” Collins said.

Collins and others said the ongoing negotiations were extending beyond counting the electoral ballots into shoring up other areas of the federal election process after the experiences of 2020. Those involved in the talks are now beginning to focus on specific areas where they think action is needed to try to develop relevant consensus legislation.

Those areas include overhauling the Electoral Count Act to clarify issues such as the role of the vice president, who presides over the congressional count, and what to do in cases of competing slates of voters; handling threats against election workers and officials, and imposing penalties for election interference; voting rights and practices; renewing the U.S. Election Assistance Commission and providing new grants for election entities; and the presidential transition.

The subject of the transition arose after the General Services Administration delayed officially signing off on the transition between administrations when Trump refused to concede and lodged false claims of widespread voter fraud.

The tension in the negotiations is most likely to come from efforts by Sen. Joe Manchin, D-W.Va., and other Democrats involved who want to expand the emerging measure to cover voting rights and practices, folding in some elements of the stalled Democratic legislation. Republicans have so far shown no inclination to reopen that fight.

“We have had that debate,” Collins said.

The goal of the talks is to get at least 10 Republicans to come aboard and hold all Democrats in line to assemble at least 60 votes to overcome a filibuster, with the hope that more Republicans would join in as they saw the potential for legislative action.

While Democrats have been able to find Republicans such as Collins and Sens. Lisa Murkowski of Alaska, Mitt Romney of Utah and Rob Portman of Ohio to join them on various measures, achieving critical mass has proved much more difficult.

“Depending on the issue, you may be able to find one or two Republicans who are wiling to make a deal, but finding 10 is a whole different ballgame,” Van Hollen said. “For a variety of reasons, too many Republicans can never get to yes.”

But despite past bad experiences and reservations about the ongoing talks, Democrats said they still held out hope they could find common ground with Republicans on voting issues.

“I have to have hope because I couldn’t come to work every day if I didn’t,” Blumenthal said. “I sincerely hope that some of my colleagues on some issues will come together.”