Anti-Trump protesters gather for third night, one shot in Portland 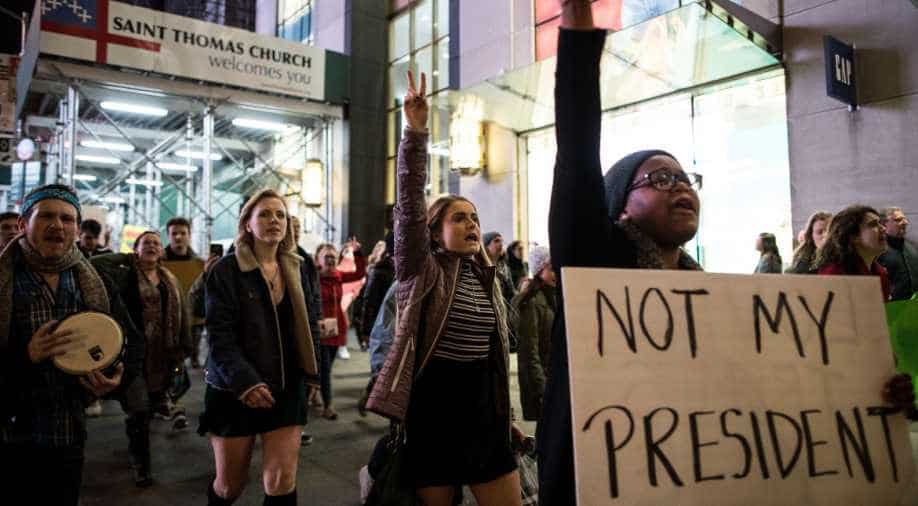 "I am Muslim too" demonstrators carried flags and posters with messages of support towards Muslims under a Donald Trump presidency. Pictured here is an anti-Trump rally in New York City, November 11, 2016. Photograph:( Getty )

One protester was shot on Saturday in Portland, Oregon as thousands of Americans took to streets on Friday and Saturday in several cities to demonstrate against Donald Trump's election as the next US president.

The unidentified man was found on Portland's Morrison Bridge.

A man came out of his vehicle on the bridge, confronted and then shot a protester, police said in a statement, news agency AFP reported. The suspect is still at large, police added.

The victim was taken to the hospital with non-life threatening injuries.

The same night, Portland police responded to protesters with pepper spray and flash-bang devices. The demonstrators had blocked traffic and threw objects at police dressed in riot gear.

At one point, police pushed protesters back and appeared to take at least one person into custody, according to footage on a local NBC affiliate, reported AFP.

Protesters chanted "We reject the president-elect" and "Whose streets? Our Streets" as they marched through the streets of Los Angeles.

Several thousand activists blocked traffic as they marched through downtown Miami, with a few hundred making their way onto a highway.

Demonstrators gathered in Washington Square Park and by Trump Tower, where the Republican president-elect lives.

"Love the fact that the small groups of protesters last night have passion for our great country. We will all come together and be proud!" Trump said on Twitter.

Anti-Trump protesters say that Trump's presidency would infringe on Americans' civil and human rights. Their concerns are based on Trump's campaign promises to restrict immigration and register Muslims. Civil rights advocacy groups reported a spike of attacks on minorities following Trump's victory on Tuesday.

White supremacist groups including the Ku Klux Klan (KKK) have praised Trump's election, reported AFP, but he has rejected the KKK's support.