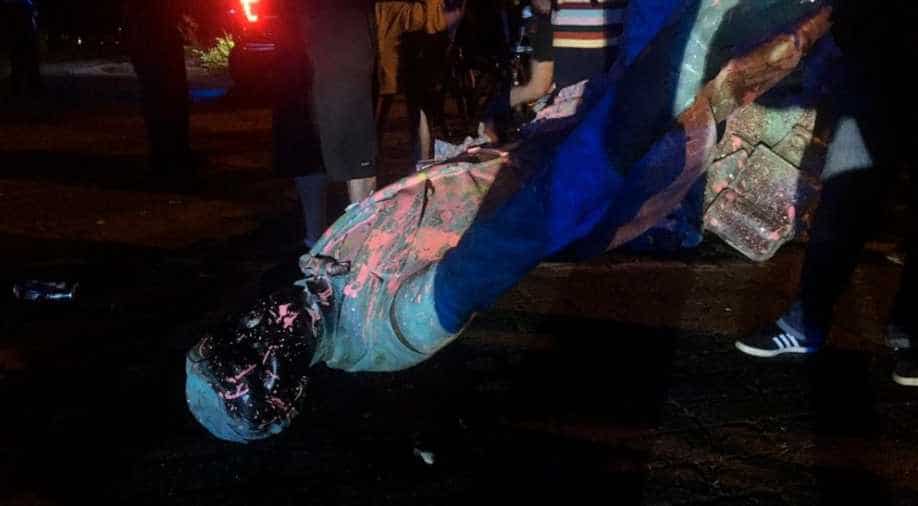 The May 25 killing of George Floyd by police in Minneapolis, Minnesota, and the global wave of anti-racism protests that followed has reignited a campaign to remove statues and other symbols honouring Confederate leaders.

Protesters toppled a statue of the president of the Confederacy in the Virginia state capital of Richmond late on Wednesday -- the latest US monument to be torn down during nationwide demonstrations demanding an end to racial injustice.

The May 25 killing of George Floyd by police in Minneapolis, Minnesota, and the global wave of anti-racism protests that followed has reignited a campaign to remove statues and other symbols honouring Confederate leaders.

Footage posted on social media showed the statue of Jefferson Davis, president of the pro-slavery Confederate states during the 1861-65 US Civil War, being pulled into a tow truck and hauled away as people cheered. The base of the statue was covered with graffiti.

The monument stood along Richmond's Monument Avenue, which is lined statues of several prominent Confederate figures. The city served as capital of the Confederacy for almost all of the war.

Many Southerners defend the monuments as tributes to war dead and part of the country's history, and vigorously oppose their removal despite their association with slavery and racism.

Earlier on Wednesday in Portsmouth, Virginia, protestors beheaded and defaced statues that were part of the city's Confederate monument.

A group of protestors also pulled down a statue of Italian explorer Christopher Columbus in Saint Paul, Minnesota, on Wednesday, and a monument to Columbus erected in Richmond in 1927 was vandalised and thrown into a lake on Tuesday.

In the early hours of Wednesday in Boston, the head of a Columbus statue was also removed.

On Monday, a judge in Richmond issued a 10-day injunction against Governor Ralph Northam’s decision to remove a statue of Confederate General Robert E. Lee from the city.