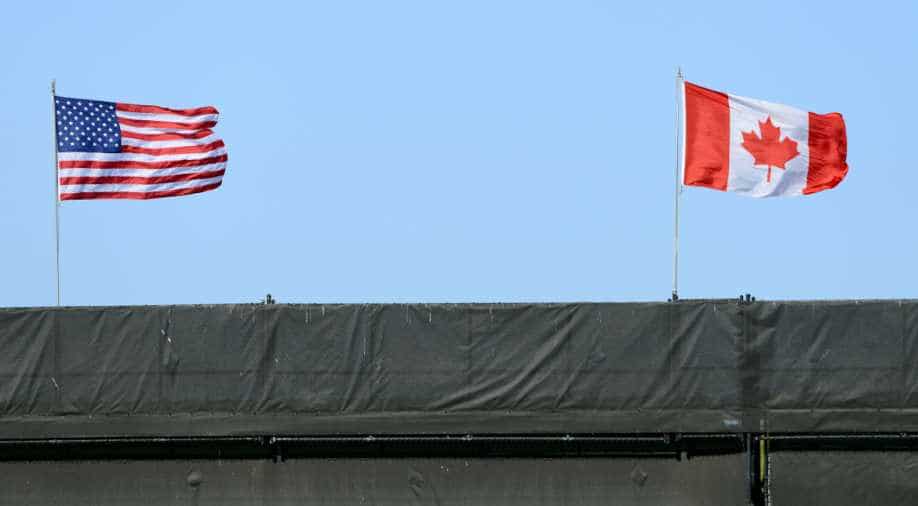 Representative image. The American and Canadian flags fly over the centrefield wall during the spring training game between the Toronto Blue Jays and the Detroit Tigers at Joker Marchant Stadium on March 6, 2013 in Lakeland, Florida. Photograph:( Getty )

In Canada, the woman who hopes to replace Stephen Harper as leader of the Conservative Party and one day become prime minister is a brazen Trump sympathiser.

The day after it was announced that America will soon be led by a racist and xenophobic sexual predator, Kellie Leitch rushed to show solidarity.

Got this from my old boss. I'm so disappointed in you, @KellieLeitch. You were Status of Women Minister - shame on you. #cpcldr #cdnpoli pic.twitter.com/hYYMYgzvH8

During the 2015 federal election, Leitch was the mastermind of proposal to establish a "culturally barbaric hotline", where people could call in to report practices they found culturally "barbaric". If they suspected a child or woman could fall victim to a forced marriage, polygamy, or female genital mutilation, the hotline was there supposedly for them. It was pointed out that a phone number already exists for when something wrong needs to be reported -- the police.

The culturally barbaric hotline was pushed as the Conservatives were not just peddling anti-Niqab rhetoric, but as the main force driving their federal election campaign. Keep in mind, a niqab is a piece of clothing almost nobody wears in Canada, and even the conservatives only wanted it banned in limited instances, like a citizenship ceremony.

Turning an issue that affects almost literally nobody in Canada into the largest issue of a Canadian election makes no sense, unless the real goal is not to regulate clothing but to woo Canadian Islamophobes. Only since discrimination isn't nice, conservatives like Leitch try to appear like they are upholding Canadian values in the very act of destroying them. It's a pernicious trick.

While the Conservatives were preoccupied with nonexistent Muslim problems, Canada voted for Liberal Justin Trudeau.

But only months ago, the Collingwood Ontario Member of Parliament resufaced with a proposal to screen immigrants for so-called "Canadian values".

Canada enshrines freedom of conscience in its constitution, and leaves it to the law to say what people can and can't do. The notion of screening immigrants for values is profoundly anti-Canadian. Practically it's unimplementable, and holding people accountable for their thoughts instead of actions rings of totalitarianism.

Plus, Canadian Conservatives opposed gay marriage until 2015. Conservatives like Leitch don't get to pretend she embodies Canadian values on Wednesday after begrudgingly accepting them Tuesday.

"Culturally barbaric hotlines" and "Canadian Values" are nothing but racist dog whistles, and it's toxic. A Conservative colleague of Leitch, Deepak Obhrai, opposed her Canadian Values scheme. In return he received emails from Canadians with various iterations on the theme, "go back to your country". Obhrai has lived in Canada since 1977. He is in his country, thank you.

Anybody who expresses even the slightest sympathy for Donald Trump must be automatically disqualified from pronouncing on "Canadian values".