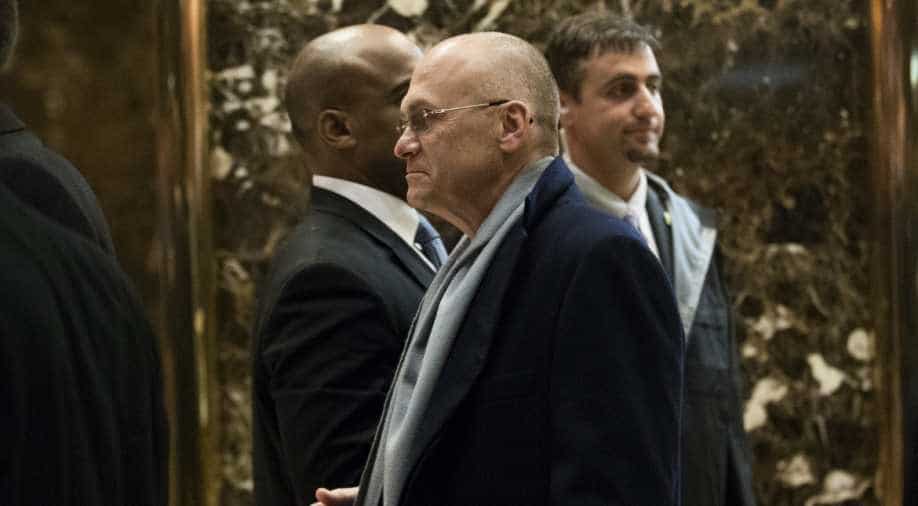 Trump's this decision of chosing Puzder is drawing criticism from labour advocates worried about his opposition to a higher minimum wage and government regulation of the workplace. Photograph:( Getty )

President-elect Donald J. Trump on Thursday chose Andrew F. Puzder as the head of the U.S. Department of Labor.

“Andy Puzder has created and boosted the careers of thousands of Americans, and his extensive record fighting for workers makes him the ideal candidate to lead the Department of Labor,” Mr. Trump said in a statement to New York Times.

Puzder, chief executive of CKE Restaurants Inc, which operates the Carl`s Jr. and Hardee`s fast-food chains, has been a vehement critic of government regulation of the workplace.

He has criticized paid sick leave policies of the sort recently enacted for federal contractors and strongly supports repealing the Affordable Care Act, which he says has created a “government-mandated restaurant recession” because rising premiums have left people with less money to spend on dining out.

Speaking to Business Insider this year, Mr. Puzder said that increased automation could be a welcome development because machines were “always polite, they always upsell, they never take a vacation, they never show up late, there’s never a slip-and-fall or an age, sex or race discrimination case.”

On the political incorrectness front, Mr. Puzder’s company, CKE Restaurants, runs advertisements that frequently feature women wearing next to nothing while gesturing suggestively. “I like our ads,” he told the publication Entrepreneur. “I like beautiful women eating burgers in bikinis. I think it’s very American.”

Matthew Haller, senior vice president for public affairs and communications at the International Franchise Association, of which Mr. Puzder is a board member, said Mr. Puzder saw “a role for government to provide advice to employers, rather than simply deterrence by ‘gotcha’ enforcement,” an allusion to the Obama Labor Department’s enforcement of laws and regulations in the fast-food industry.

In an appearance on Fox Business in May Puzder, he said that he was “not opposed to raising the minimum wage rationally; I’m opposed to raising it to the point where lower-skilled workers, working-class Americans, young people, minorities, are losing the jobs they need to get on the ladder of success.”

Trump's this decision of chosing Puzder is drawing criticism from labour advocates worried about his opposition to a higher minimum wage and government regulation of the workplace.

Fast-food workers, who are largely not unionized, are engaged in a multi-year campaign known as the "Fight for $15," which is supported by labour unions, to raise minimum wages to $15 per hour. They have had state-wide successes in New York and California and in cities and municipalities such as Seattle.

Republican Trump beat Democrat Hillary Clinton in last month's election by carrying swing states - and some traditionally Democratic states - in the U.S. Rust Belt after promising to create jobs and to review or cancel trade deals that he said were bad for workers.

Labor leaders have been girding for Trump to appoint pro-business regulators at the Labor Department and National Labor Relations Board, and to roll back key regulatory initiatives of the Obama administration such as a Labor Department rule granting overtime pay to more than 4 million salaried workers, both unionized and not unionized.

Economic research suggests that an increase to the vicinity of $10.10 per hour would have little or no effect on employment in much of the country, though the impact could be larger in low-wage, low-cost areas. Mr. Puzder has raised concerns about the effects in those regions.

On other issues, Mr. Puzder has taken hard-line positions that leave less room for negotiation. Perhaps most prominent is the so-called joint employer doctrine that the Obama administration and its agency appointees have put forth in recent years.

Under that doctrine, large companies that have franchises or hire other companies as contractors are more likely to be held liable for violations of employment laws by those contractors or franchisees. Parent companies typically argue that they have no legal responsibility in these cases.

Perhaps the biggest question surrounding Mr. Puzder is how he would be perceived as a wealthy chief executive charged with looking out for workers’ interests.

According to a 2012 filing with the Securities and Exchange Commission, Mr. Puzder’s base salary that year was more than $1 million and his total compensation over $4 million, down from more than $10 million the year before. “Annual base salaries should be competitive and create a measure of financial security for our executive officers,” the filing said.

(WION, with inputs from New York Times and Reuters)