Amid Russia-Ukraine chaos, here's how an Indo-Ukrainian couple had a narrow escape 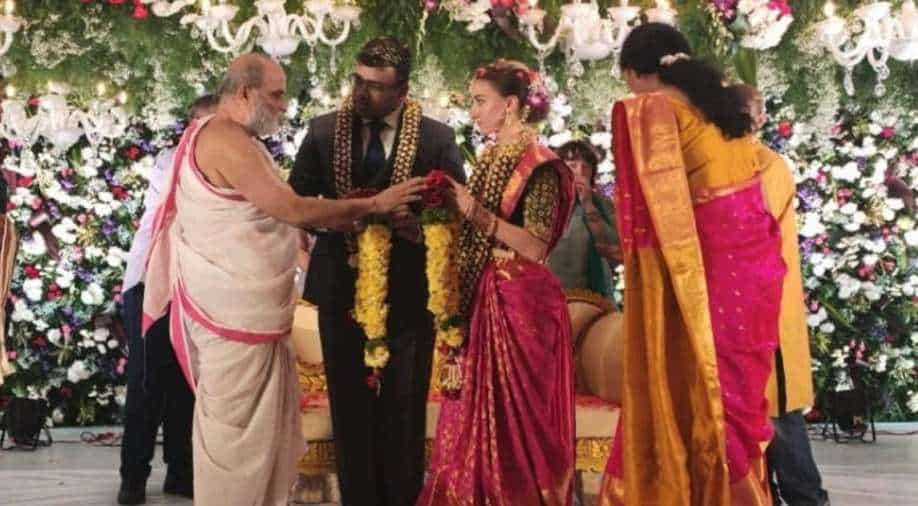 Videos and images of the Prateek and Lyubov's reception were circulating on social media forums. Photograph:( Twitter )

CS Rangarajan, who is the chief priest of Chilkur Balaji temple, officiated the reception as per media reports

Amid the crisis and chaos in Ukraine that has impacted the world and global economy, an Indo-Ukrainian couple has quite a striking story to tell.

Indian media outlets reported how a Hyderabadi boy and a Ukrainian girl just evaded the crisis after getting married in Ukraine as they left the country and arrived in India.

Prateek, who belongs to Hyderabad - the capital of southern Indian Telangana state, tied the knot in Ukraine on February 23 with a girl named Lyubov. The couple came to India to host the reception, just a day before Russia invaded Ukraine.

CS Rangarajan, who is the chief priest of Chilkur Balaji temple, officiated the reception as per media reports. He blessed the couple and was quoted as saying: "This war has brought bloodshed, turmoil worldwide and impacting the Covid-19 devastated world further."

Videos and images of the reception were circulating on social media forums. Watch:

Chilkur Priest @csranga prayed for the war to end while blessing this new relationship!

The couple tied a knot in Ukrain & came to India to host the reception a day before war started pic.twitter.com/bwo3qJHEOZ

Meanwhile, the Indian government has launched 'Operation Ganga' to bring back stranded students and Indian citizens from the conflict-torn Ukraine as special flights are being operated by Air India as part of the 'Operation Ganga' mission.

Sources also said that the Indian Prime Minister Narendra Modi called on President Ram Nath Kovind and briefed him on the prevailing situation and steps being taken by the government.

On Monday (February 28), PM Modi while presiding over a high-level meeting over the Ukraine crisis said that the entire government machinery is working round the clock to ensure that all stranded Indians in Ukraine are safe and secure.

India's Ministry of External Affairs also said that India has evacuated over 8,000 nationals since the initial advisories were issued.