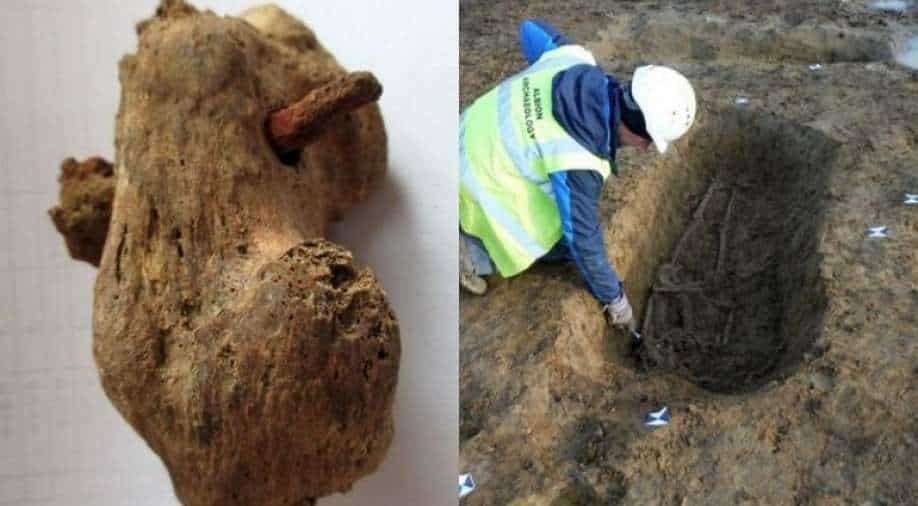 This is the first crucifixion-related find that has been reported in northern Europe, and it was the fourth reported worldwide; two of the finds did not have nails. (Picture credits: Albion Archaeology) Photograph:( Others )

The man, believed to be in his mid-thirties at the time of his death, was buried with his arms crossed in a grave with a wooden structure, possibly a bier

A near 1,900-year-old skeleton was found at the site of future housing development in Cambridgeshire. Initially, it did not seem noteworthy. However, when the remains were sent to a lab in Bedford, a grisly discovery was made, a nail through the heel bone. As far as experts are concerned, this is one of the best pieces of physical evidence of crucifixion in ancient Rome.

The man, believed to be in his mid-thirties at the time of his death, was buried with his arms crossed in a grave with a wooden structure, possibly a bier, in one of five ancient cemeteries around the newly discovered Roman settlement at Fenstanton, near Cambridge.

Radiocarbon dating reveals that the Fenstanton man lived between AD130 and AD360, making his bones between 1,661 and 1,891 years old.

Nails used for crucifixion – the method of capital punishment by which the victim is tied or nailed to a large wooden beam and left to hang until death – are a rare find, most likely because the victims would not often have received proper burial and, contrary to popular views, it was commonly carried out using a rope.

It is rare to find nails used in the crucifixion, a form of capital punishment in which victims are nailed or tied to a wooden beam and hung from it until they die. Most likely, this is because the victims rarely received proper burials and, contrary to popular belief, they were usually hung by a rope.

After a prolonged analysis, crucifixion emerged as the most likely explanation. On Wednesday, British Archaeology magazine published the first details of this extraordinary find.

Also read | Wait, what!? Scientists say water in our oceans has alien origins

The skeleton was found in November 2017 without the nail being noticed due to its small size and the caked-on mud where it protruded. Actually, the nail was not revealed until the bones were bagged and transported to the lab for cleaning.

According to Albion Archaeology director David Ingham, this was the first time a nail had been found in an archaeologically exhumed skeleton. It's not the sort of thing you're looking for, he said.

He explained that because of historical records, archaeologists know a fair amount about crucifixion, including how, when, and where it was performed. However, this is the first tangible evidence to demonstrate how it worked.

It is also a significant discovery since it is very rare for a crucifixion victim's body to be reclaimed, brought back to a settlement, and buried with others.

The cause, the identity of the man, and the reasons for the crucifixion will never be known, but it is believed that Romans reserved the crucifixion for slaves, rebels, and members of the lower classes.

A nail was found in the right heel bone of the Fenstanton man, the calcaneum, which was probably inserted into the side of an upright timber. It is likely that the crucifixion took place somewhere else, possibly by a roadside.

This is the first crucifixion-related find that has been reported in northern Europe, and it was the fourth reported worldwide; two of the finds did not have nails.